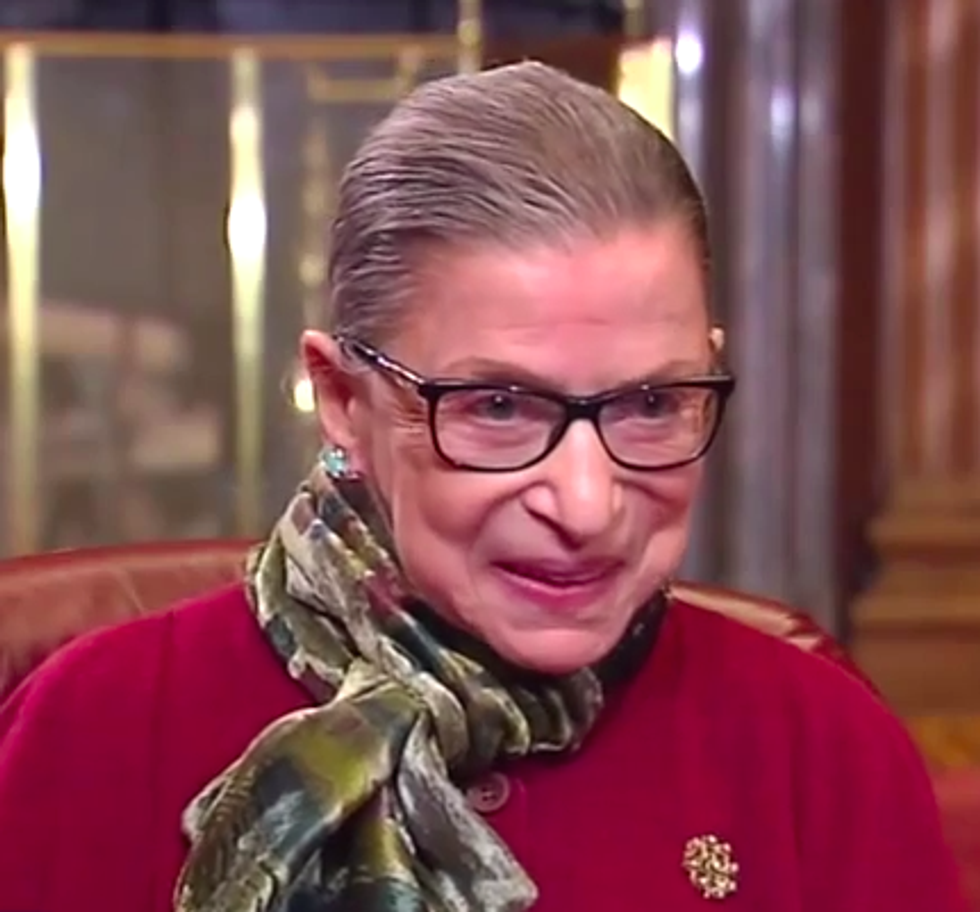 No, seriously, we would like to go. Wonkette and RBG would make great roomies.

Have you ever wanted to spend the rest of your days in a sunny, beautiful foreign land that is next to Australia but somehow is not actually Australia? Well, you might get to be roommates and stay up late and braid hair and talk about boys with Supreme Court Justice Ruth Bader Ginsburg, because she's probably (definitely) moving there if Americans decide to be even stupider than when we elected Dubya twice and put Donald Trump in the White House.

Ginsburg explained all her plans to pack it up and join Lorde's girl squad in New Zealand at age 83 in an interview with the New York Times:

It reminded her of something her husband, Martin D. Ginsburg, a prominent tax lawyer who died in 2010, would have said.

[wonkbar]<a href="http://wonkette.com/603833/bernie-sanders-set-to-become-total-hillary-endorsing-sell-out-by-next-tuesday"></a>[/wonkbar]Can you imagine? Seriously, it bears repeating, on this week where Hillary Clinton and Bernie Sanders are officially making nice-nice and trying to unite forces to defeat Trump, what sane American humans staying home in November would do to the Supreme Court. Put it this way: Right now there is a vacancy on the court, in the chair which used to contain Dead Scalia's rapidly decomposing taint. After the election, because the average age of some of the current SCOTUS members is "Old Balls," there will likely be more vacancies!

Shall we let Hillary Clinton appoint all those justices, or should we let Trump give them all to Omarosa and whatever white supremacist leaders he's retweeting that week?

[wonkbar]<a href="http://wonkette.com/599725/lets-meet-obamas-sexxxy-silver-fox-scotus-nominee-merrick-garland"></a>[/wonkbar]As for Obama's nominee, Merrick Garland, who is still sitting around playing Pokémon Go while he waits for a vote, Ginsburg says he's "about as well qualified as any nominee to this court," and that confirming Obama's SCOTUS nominees is part of the Senate's job, so obviously the GOP will stop playing with its balls and get right on that.

So, does RBG have anything else to say besides how she might say "BYE FELICIA!" to 'Murica if Trump is elected? Yes! She says United States v. Texas, the deadlocked case that left in place an injunction against Obama's executive actions on immigration, would have been a lot worse if her old dead best pal buddy bro Scalia hadn't died -- “Think what would have happened had Justice Scalia remained with us," that is what she actually said, about her dead BFF -- as it would have set a terrible precedent for future immigration battles.

And speaking of terrible precedents, she says the following SCOTUS decisions are bad, and should be put in a flaming dumpster with Donald Trump's presidential hopes, dreams, thoughts and prayers: Citizens United, Shelby County v. Holder (gutted the Voting Rights Act) and District Of Columbia v. Heller, which gave a gift basket full of firearms to every man, woman and child in DC. (That is just a joke! Kind of!)

[wonkbar]<a href="http://wonkette.com/603446/yay-abortion-best-scotus-decision-ever-strikes-down-texass-garbage-trap-laws"></a>[/wonkbar]As to decisions she likes? She's real happy about #BeckyWithTheBadGrades losing her affirmative action case, and she's super stoked about the Texas abortion decision too! Having only eight people on the court is fun when Justice Anthony Kennedy is acting right, is what she's not at all subtly implying.

She concludes by saying she would be very excited to be part of a big liberal gay majority on the Court, so let's give her her wish and vote early and often for Hillary, in Jesus's name, amen.