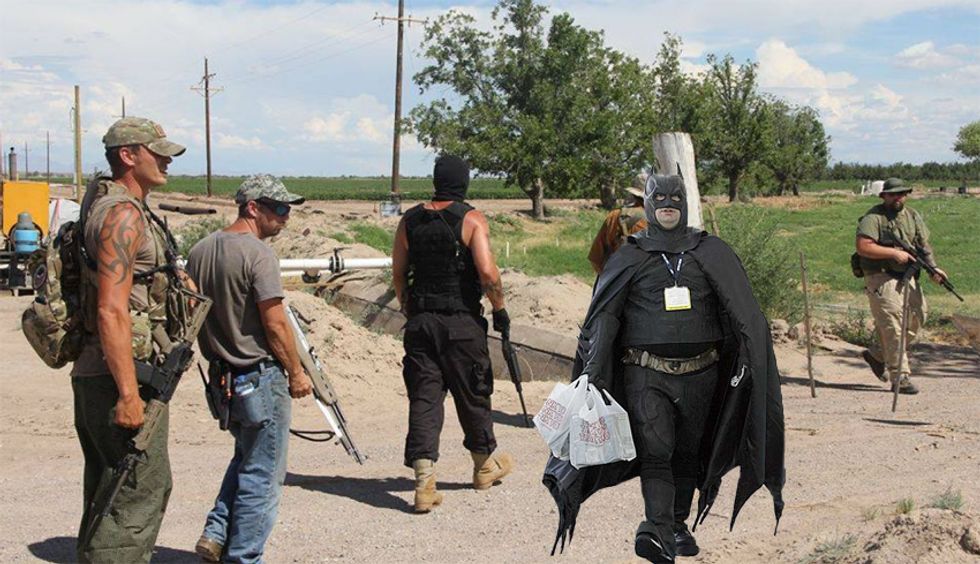 The heroic patriots of the militia movement have scored another huge success for freedom and America in a nighttime operation last week, confronting a group of suspicious people near the Mexico-Arizona border and calling in the Border Patrol to check out the possible drug smugglers or illegal immigrants orISIS terrorists or whoever the hell they were. OK, sure, once our AR-15 toting heroes shined a spotlight on the scary potential invaders and demanded they identify themselves, it turned out that they'd bravely interdicted a small group of biologists conducting a survey of the area's bat population. But it's still a victory, since they could have been smugglers.

Teevee station KOLD has the nitty:

It happened Aug. 23 in the Gardner Canyon area near Sonoita where the small group of conservationists was out in the middle of the night conducting a wildlife population survey, in this case, counting bats.

Nobody was hurt during the confrontation, but the incident has law enforcement taking notice.

Santa Cruz County Sheriff Tony Estrada say the militiamen were on ATVs. They were carrying weapons and were wearing camouflage.

"Obviously, they mistook them for smugglers or illegal entrants," says Santa Cruz County Sheriff Tony Estrada. "They were armed. They put a spotlight on them."

The conservationists filed a report with the Santa Cruz County Sheriff's Department.

That's about what you'd expect from a scientist-coddling county sheriff named "Estrada" (the only Real American sheriff in Arizona is named Arpaio), but let's not lose sight of the essential questions. Did these bats have visas? Or are they undocumented Mexican bats, pouring across the border to grow fat on American insects? Have the bats been checked for disease or terrorist associations? WHAT IF THE BATS HAVE EBOLA? What then, mister and mizz smart-guy scientists?

The militiamen, who had come down to Sonoita from their homes in the troubled border region of Colorado, somehow choked back their justifiable rage at the impertinent bat-huggers -- honestly, what are a bunch of civilians even doing in a high-risk area near the border, where they could get beheaded or slapped with a Muslim prayer rug? -- and apologized to the conservationists, who were still angry for some reason. Don't they understand that to keep America safe from terrifying Guatemalan children, it's sometimes necessary for other heavily armed civilians to take it upon themselves to make sure there's nothing funny going on?

As for the useless law enforcement effort along Our Porous Border™, Sheriff Estrada simply doesn't appreciate all the help that a bunch of untrained yahoos are more than happy to offer:

"It can be a problem for them. It can be a problem for the people, just like in this particular case. Things could have gone terribly wrong," Estrada says. "They really don't accomplish anything. They really don't. With about 1,000 Border Patrol Agents here in Santa Cruz County, a little group of any militiamen are not going to make any difference at all. As a matter of fact, they're going to get in the way and they could get hurt. Or they could hurt somebody else."

Before learning that they had captured some indignant biologists and grad students, the militia excitedly reported their find to the Border Patrol, which dispatched agents to go check out the dangerous invaders. Not like those agents had any real patrolling to do elsewhere in the area, since we all know that Barack Obama has ordered them to let all illegals walk right by them. That's on the internet, so you know it's true.

In response to a request from KOLD, Customs and Border Protection issued a written statement denying that the vital mission of the armed patriot volunteers was of any value, which just goes to show how badly Big Government understands the gravity of our Bat Invasion:

On August 23, at approximately 10 p.m., Tucson Sector agents received a phone call from a member of a militia group reporting suspicious activity in the area of Sonoita, Arizona. Sonoita station agents responded and encountered a small group of biologists studying bats.

CBP does not endorse or support any private group or organization to take border security matters into their own hands as it could have disastrous personal and public safety consequences. CBP strongly encourages concerned citizens to call the U.S. Border Patrol and/or local law enforcement authorities if they witness or suspect illegal activity.

Securing our nation's borders can be dangerous. Interdicting narcotics and deterring and apprehending individuals illegally entering the United States requires highly-trained, [sic] law enforcement personnel. In all cases, individuals should not attempt to detain, provide transportation or any other assistance to migrants that may be viewed as furtherance of illegal entry. Detaining or assisting an undocumented migrant could result in prosecution.

Doesn't the Border Patrol watch Fox News? We're simply drowning in a brown tide, and keeping out filthy Mexicans from Guatemala and Honduras is far too important a job to be left to law enforcement personnel who know the area and have some idea of what they're doing. Ignorant yokels running around with guns made this country what it is today, and that's how we need to keep it.