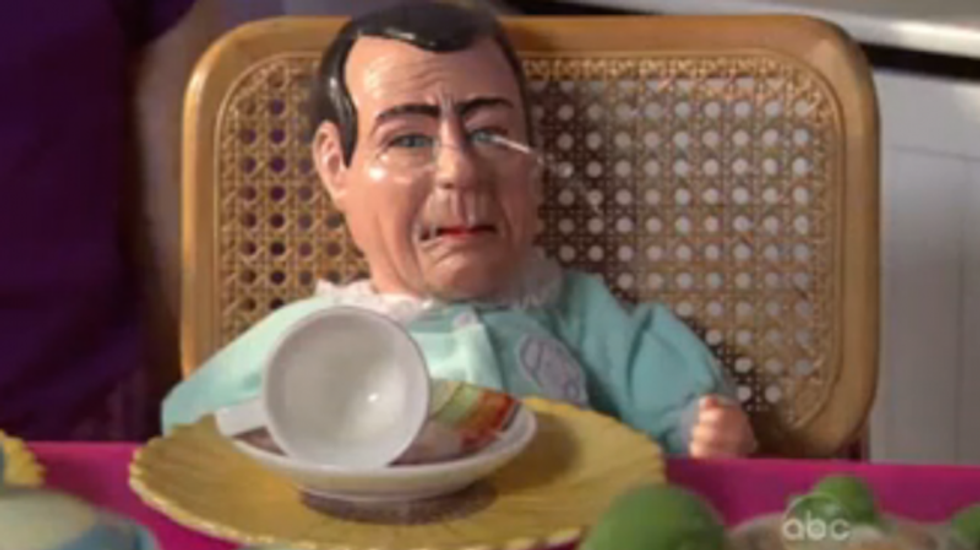 Have you been wishing that distressingly orange hobgoblin John Boehner and a group of even more conservative and unhinged congresscritters would raise the spectre of religious freedom in a way that isn't just about worrying whether a cake-maker in flyover country will be forced to lovingly feed wedding cake directly to the mouths of gays? You are in so much luck, because last night the House voted to blurt RELIGIOUS FREEDUMB at all of Washington D.C., for having the goddamn gall to pass a law that says you can't fire people just for liking to murder babies. Praise Jesus for the House of Representatives having the presence of mind to save Washington D.C. from itself.

Some background: late last year, laboring under the quaint illusion that they actually have self-governance and should be responsible to the people that dwell there rather than the religious nitwits that are your modern GOP House-dwellers, the Washington D.C. City Council passed a law that would ban city employers from in any way taking action against employees who get 'bortions or choose to kill their babies earlier, with birth control.

This made walking talking chinless baby man Ted Cruz very sad, so back in December he introduced a measure to throw out the law under the premise that he was grooming himself for a presidential run and needs to look as wingnutty as possible. Haha that is not true, because Ted Cruz is genuinely that wingnutty.

Regrettably, Congress can actually throw out D.C. laws if both the House and Senate pass the measure, but mercifully the Senate still has a small quantum of non-idiots, which has ensured that this thing is not a priority over there. No such luck in the House, though, where conservatives whipped each other into a froth over the relatively tepid idea that you shouldn't fire people for what they believe, because the only people you should not fire for what they believe are Christians, duh. The House took a vote on this last night and surprise, surprise, it passed. Let's listen to John Boehner mumble-cry through an explanation as to why.

“This is about conscience protections that the president says he supports but really hasn’t put regulations in place to protect. . . . It’s, frankly, been part of our laws and statutes for decades and decades, and so our members thought it was important, and that’s why it was added to the schedule,” the speaker said.

Oh good lord that is boring, John Boehner, and really makes no sense because we were unaware that Obama supported the idea that you should hire and fire people based on their private reproductive health choices. Let's go ask some of your more radical and more stupid Congressfriends why this thing was so goddamned important.

Rep. Bill Flores (R-Tex.), chairman of the influential Republican Study Committee, said he spoke to Boehner three times in efforts to push the GOP leadership to bring the measure to a vote.

“We were unhappy with the D.C. Council’s attempts to stifle our First Amendment rights and religious liberty,” Flores said in an interview [...]

Rep. Diane Black (R-Tenn.), who co-introduced the measure with Cruz, called it Congress’s “constitutional duty” to turn back the D.C. legislation. “While the law’s supporters in the big-abortion lobby claim that this act protects against discrimination, the truth is this oppressive measure directly targets the First Amendment freedoms of pro-life and faith-based employers in our nation’s capital,” Black said in a statement.

Christ, we wish we lived in a time when "First Amendment freedoms" did not directly translate to "Christian conservatives do not want their fee-fees hurt and want to never give any speech or behavior rights to anyone that is not them" because we are actually pretty sure that is not what the First Amendment says.

Thankfully, this is all symbolic because the Senate doesn't care and Bamz would never sign. But hey, at least we got another chance to see some good old GOP respect for local control and small government. Oh wait.