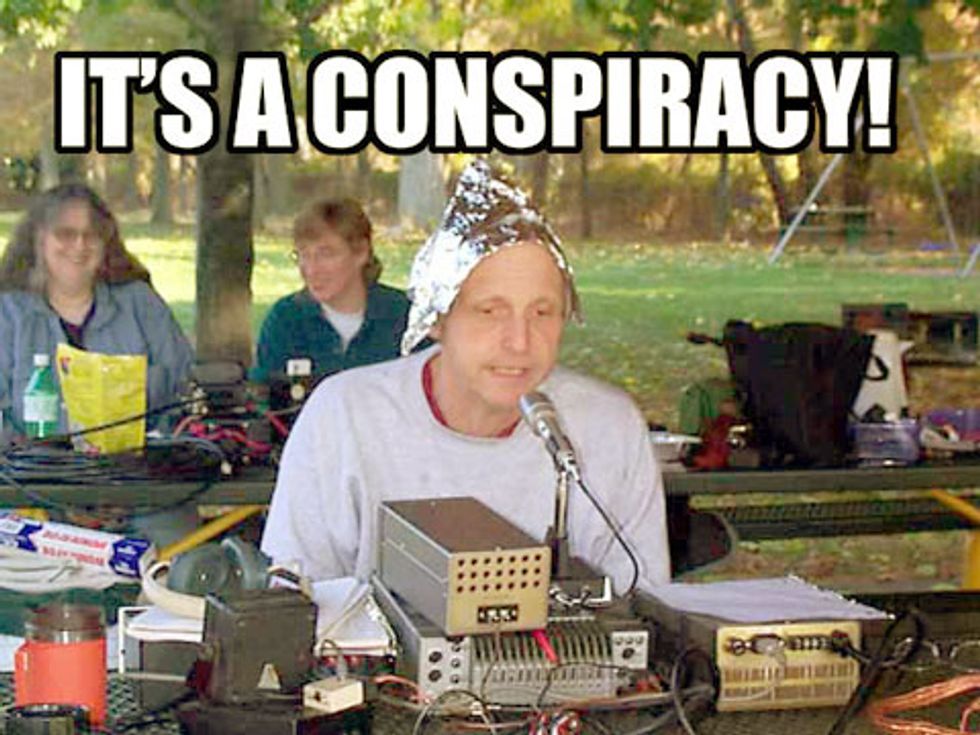 If you are a fear-addled conspiracy theory-loving wingnut reading this, you already KNOW what we are about to say. Terrible demonic false flag Indo-Kenyan "President" Barack Obama is preparing AT THIS VERY MOMENT to impose martial law on Texas, which will probably be enforced by ISIS, who is currently hiding behind some brush just over yonder, on the Mexican banks of the Rio Grande. Shit yer pants and oil yer guns, y'all, it's time for a revolution!

If you are not one of the people we were just addressing above, here is a thing that is happening! Gov. Greg Abbott has ordered the Texas State Guard -- NOT the National Guard, the State Guard, which is different -- to keep an eye out on a planned U.S. military training exercise called Operation Jade Helm 15, because SOME PEOPLE are very worried, for completely serious reasons we are sure, that maybe Barack Obama is going to use this two month-long exercise to declare martial law and send ISIS to take over Texas, in order to accomplish ... something! According to the military, the exercise is intended to work like this:

The mission is vast both geographically and strategically: Elite service members from four branches of the U.S. military will launch an operation this summer in which they will operate covertly among the U.S. public and travel from state to state in military aircraft. Texas, Utah and a section of southern California are labeled as hostile territory, and New Mexico isn’t much friendlier.

Who you fuckin' callin' hos-tile territory?! Residents of Bastrop County, Texas, part of the area where the exercise will be held, filled up the county's commissioner court recently to express their sincere concerns:

[US Army Lt. Col. Mark] Lastoria took a number of questions from people who suspect Jade Helm is something nefarious. Bastrop County resident Daniel DuCloux has some reservations about the training program.

"I think historically, it's much more common for governments to be tyrannical and infringe on other's rights,” DuCloux said. “So when you see a large military build-up like this, I think it's our duty as citizens to question what's going on and to find answers. I mean, if we don't, then who will?"

I mean, who will protect the poor Texans from the completely routine military exercise that is to be conducted in defenseless Bastrop County?

In a letter Abbott sent to Major General Gerald "Jake" Betty, head honcho of the Texas State Guard, he expressed that he has "the utmost respect for the deep patriotism of the brave military men and women who put their lives on the line to fight for and defend our freedom." He's just worried that maybe Obama has brainwashed them into making war on Texas, is all.

So what, in the fevered crevasses of their brains, are the conspiracy wackos so worried about, specifically? Glad you asked! Raw Story reports that Lt. Col. Lastoria had to do everything he could to soothe the wingnuts' fears that "no intelligence would be gathered on non-participants, no property would be confiscated, and no psychological operations would be conducted." We would be very worried about the military secretly conducting psy-ops on us too, if we were insane! Lastoria also tried (and failed) to assure them about a couple of their other concerns:

The Army spokesman assured participants that the United Nations was not involved in the operations, but the crowd jeered when he told them he was not familiar with Agenda 21 – another conspiracy theory.

But that's not all! These fucking loons also were very worried, because well you see, several Walmarts across the country have closed recently. NATURALLY these will be used as detention centers for patriotic Americans, right? No, said Lastoria, "an extra minute of research" would show that there were perfectly reasonable explanations for those. He did not add, "maybe you should have fucking Googled it before you came to bother me, but no, of course you didn't, you are all idiots!" And really, the Walmart fears are stupid, because DUH, Alex Jones debunked that conspiracy theory last week! His Infowars website explains that getting all caught up in the Walmart closings distracts us from the REAL conspiracy theories about Jade Helm.

And those are the ones that matter, duh! Jones has explained multipletimes that this is about getting the military ready to sneak in to American cities undetected, so they can declare martial law and send everybody off to FEMA camps. Or something like that. Jones and his minions are so tediously wordy that the only real takeaway we have is that we're supposed to be shitting our pants about something.

Oh, we almost forgot the ISIS part! You see, a Texas Ranger, who is anonymous, BUT DEFINITELY EXISTS, has written a letter to a conspiracy loon, stating that "we expecting [sic] an attack on more than one Texas city or town by ISIS and/or any of their partners," and that this could happen any day now. Because duh, ISIS is totally in Mexico right now, just a few miles from El Paso, and they are working with the drug cartels, to attack America! Are the Jade Helm people coming into KILL the ISIS, or are they coming in because Barack Obama instructed them to work alongside ISIS in order to take Texans to FEMA camps??? No way to tell!

Anyway, nice try Gov. Abbott, but you're going to have to do a little more than just sending a letter to the Texas Guard, if you really want to protect patriotic Americans from the all-powerful and super-real threat of ISIS, the U.S. military, Barack Obama, the UN, Agenda 21, and probably chemtrails (why not), destroying the beautiful state of Texas and taking away all their precious freedoms.