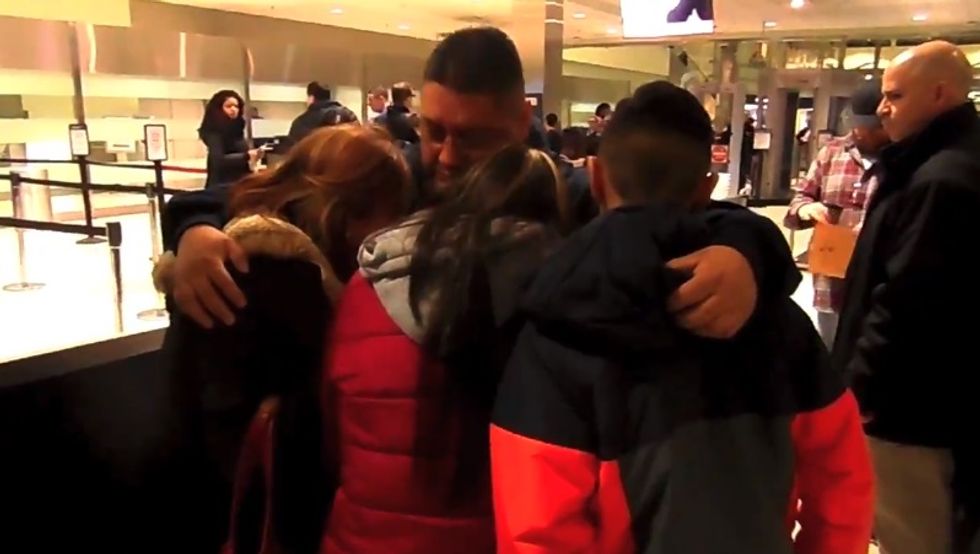 Jorge Garcia's string of non-crimes has finally come to an end.

The New Cruelty racked up another win Monday. Immigration officials saw to it that Michigan resident Jorge Garcia was put on a plane from Detroit and deported to Mexico. Garcia was brought to the USA without papers 30 years ago, when he was 9 years old, and is married to a US citizen; they have two kids, and Garcia has never committed a crime (no, not even when he was 9 -- remember, being without papers is a civil offense). But he was too old to qualify for DACA, none of his other efforts to get legal status had succeeded, and so he had to go "back" to a country he barely remembers from childhood. The Homeland is secure.

Garcia and his wife, Cindy, have spent about $125,000 on legal costs since 2005 trying to find a way for him to stay in the country, but it turns out that just being married to a citizen won't win a green card. There goes another myth, not that anti-immigration wingnuts will ever give it up. He'd been ordered removed in 2009, but granted several stays of removal since then. Not under Donald Trump, though, because Trump promised to get rid of all the dangerous criminal aliens who are causing American Carnage. So the landscaper from the Detroit suburb of Lincoln Park, who'd always paid his taxes and followed the law (apart from viciously letting himself be brought here when he was nine, of course), had to say goodbye to Cindy, and to his daughter Soleil, 15, and his son Jorge Jr., 12, at Detroit Metro Airport, while ICE agents stood nearby to make sure he didn't make a run for it.

Garcia had asked ICE if it would be possible to delay his deportation another month or so, in case Congress worked out a new DACA bill with more generous age limits, but nothing doing. The law is the law, and what part of "illegal alien" don't you understand? Besides, Michigan congresswoman Debbie Dingell had already intervened in his case -- he'd originally been scheduled to be deported the day after Thanksgiving, but she persuaded ICE to allow Garcia to be with his family for the holidays. Which turned out to not be very festive anyway, so that shows how wasted mercy is on your illegals, doesn't it?

A spokesman for ICE told the Free Press on Monday that he could not immediately comment since it was a federal holiday, and their offices are closed.

You know, to remember Martin Luther King, whose dream Donald Trump said was shared by all Americans. The White House issued a very inspiring tweet about that beautiful dream:

Mind you, it says OUR people, and if you don't have the papers you're not our people so fuck you -- no dreams for illegals. Now be quiet: Trump has to concentrate on this putt.

Still, this has to be good for America, right? Cindy Garcia, who's retired from a truck plant in Dearborn, says she's not sure she'll be able to make enough money to support herself and the kids, but surely she'll get a new job once all the illegals have been deported and the manufacturing jobs come roaring back thanks to the tax cut. And yeah, their two kids will be adults before Garcia will be eligible to even apply to come back to the US, in a decade, but they can probably Skype or something.

The main thing is, Donald Trump is keeping his promise, and we're getting exactly the America he said we'd get if he were president, Amen.