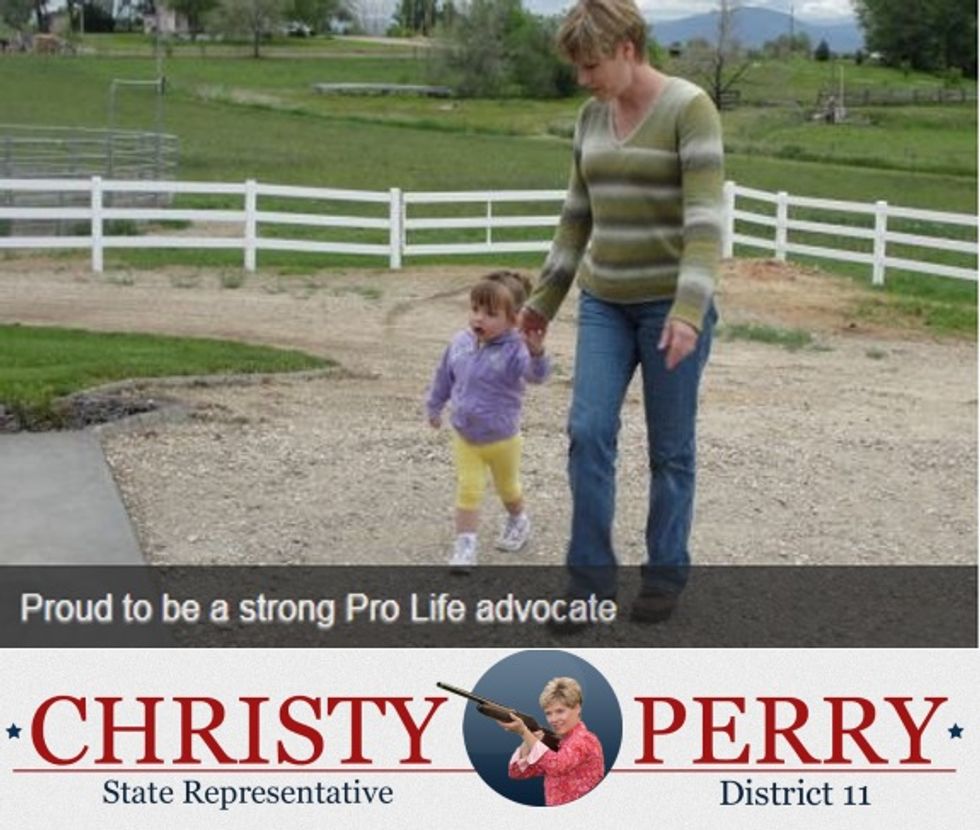 Meet Idaho state Rep. Christy Perry, who is Very Pro-Life, and whose website visually suggests that "guns" just might be her middle name. She's also very big on religious freedom. Including, it turns out, the absolute right to let your children die if you think God doesn't want them to go to a doctor. And that's why she opposes a bill that would limit Idaho's religious exemption from the state's laws on child neglect. Congratulations, Rep. Perry! We think you may have actually out-looned your colleague Vito Barbieri, who has no idea where a vagina is.

You see, the microscopic town of Marsing, Idaho (population about 1,000), has this loony faith-healing church, the "Followers of Christ," whose children have an unfortunate habit of dying from preventable illnesses. It's hard to pin down how many preventable deaths there have been; the AP identifies at least four just since 2011.

Democratic state Rep. John Gannon has introduced a bill that would make parents criminally liable if they refuse to treat children when the child's illness results in death or permanent disability -- even if they really prayed hard and God decided not to make the child all better. Oregon passed a similar faith-healing exemption in 2011 after several child deaths in another branch of the Followers of Christ.

Rep. Perry, however, is Very Concerned about big government trampling all over her constituents' religious freedoms:

And apparently if the children reach eternity a lot faster because their parents think God will send them to hell if they give a baby antibiotics instead of trusting Him, that's none of the state's business. After all, as we know from Rand Paul in the vaccination "debate," parents own their children, and the state has no business interfering if parents get it in their heads that God would prefer to let their beloved child live or die.

A Portland TV station's 2013 report on the Followers of Christ noted that, in their favored cemetery in Marsing, over a quarter of the 553 marked graves appeared to be children under 18. A skeptic might get the impression that God is a really lousy listener. Or maybe He's just distracted by all the prayers from sports teams.

Rep. Perry is, all in all, content that the current exemption for faith healing is serving her constituents well, according to a report by Al-Jazeera America:

“They have a clear understanding of what the role of government should be,” she said. “[It] isn’t how to tell me how to live my life.”

And perhaps, she said, Followers of Christ are more comfortable confronting death. “Children do die,” Perry said. “And I’m not trying to sound callous, but [people calling for reform] want to act as if death is an anomaly. But it’s not. It’s a way of life.”

It's all just a matter of individual choice, isn't it? At least when it comes to actual living children and their medical care. As for fertilized eggs, Ms. Perry is absolutely opposed to women making any choices that might harm them. Once they're out of the womb, of course, they're on their own. Live, die -- whatever God's in the mood for, you know?