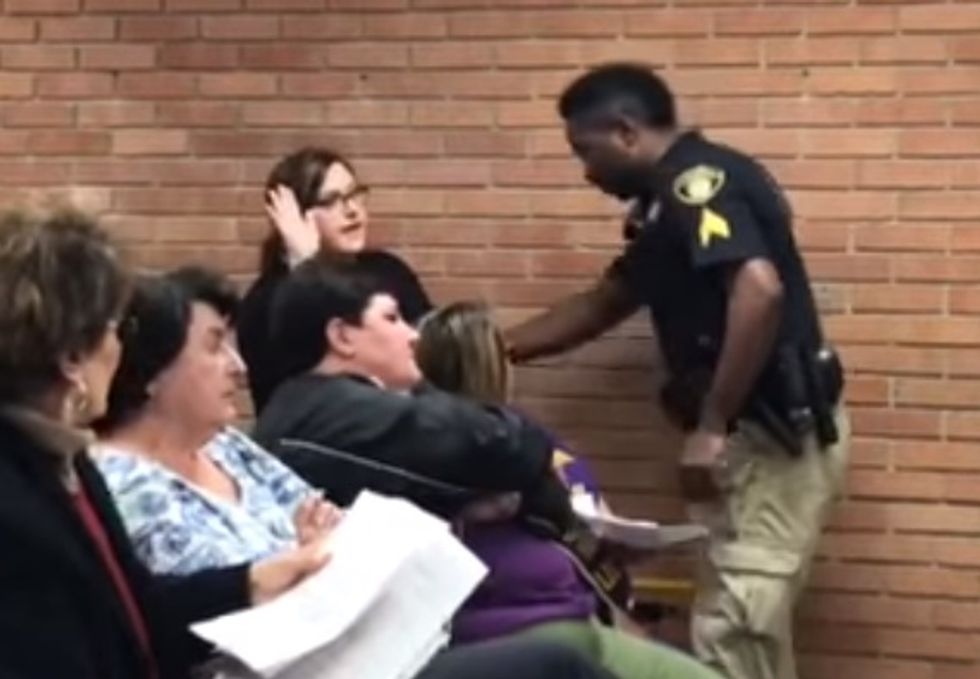 To Protect And To Shove.

A Louisiana teacher was taken out of a school board meeting Monday after arguing that an administrator didn't deserve a pay raise based on teachers' and students' improvements, and then for good measure, a local cop who escorted her into the hall shoved her to the floor while putting handcuffs on her, then hauled her off to jail. We're almost certain that's not in Robert's Rules of Order.

Middle school English teacher -- they're always the troublemakers -- Deyshia Hargrave spoke before the Vermillion Parish School Board voted to give a $38,000 raise to Superintendent Jerome Puyau; then, after the vote, when she asked Puyau how he could accept a raise when teachers haven't gotten one in years, she was told by a police officer to leave the room. Here's the full video; if you want to skip to the good stuff, Hargrave's first statement starts around 30 seconds in, then her second comments and the arrest come at about 6:13.

Obviously, this lady is some sort of radical labor thug, thinking there should be pay equity between administrators and the serfs:

“I have a serious issue with a superintendent or any person in a position of leadership getting any type of raise,” Ms. Hargrave said, standing next to her seat. “I feel like it is a slap in the face to all the teachers, cafeteria workers and any other support staff we have.”

She said class sizes were growing.

“We are doing the work, the students are doing the work,” Ms. Hargrave continued. “At the top, that is not where kids learn. It is in the classroom, and those teachers like myself are not getting a dime from that. And that is unspeakable.”

The board went ahead and voted to approve the superintendent's contract with the raise, and audience members began muttering about what the point of open meetings were if the board wouldn't listen to the public. Hargrave raised her hand and a board member said, "Yes Ma'am," and the troublesome teacher got all personal and Out Of Order -- although her voice remained calm, she said very mean things!

A board member whacked his gavel and said "Stop right now," and said her question was "not germane," prompting an outcry from members of the audience who felt it damn well was germane. Ms. Hargrave had been warned and given an explanation, but nevertheless, she persisted:

I am saying how are you taking the raise when you are basically taking from the teachers and employees under you. When we have class sizes that are that big. This directly speaks to what you have just voted on.

At that point, the cop -- OK, fine a "deputy city marshall" employed as a school resource officer -- showed up and told her, "You are going to leave or I am going to remove you. Take your things and go." Hargrave, still making trouble by refusing a direct order, asked whether she was allowed to stand up, then the cop made a grab for her arm, at which point she began leaving the room -- even though by that point, Puyau was actually starting to address her question. Out in the hall, Hargrave somehow ended up on the floor while the cop cuffed her and -- no doubt thrilled to deliver the line -- told her, "stop resisting."

You know how scofflaws can get all over-dramatic; Hargrave replied, as she got to her feet and was walked away, "I am not — you just pushed me to the floor. I am way smaller than you." As if that made any difference! He could have shot her if he'd wanted, probably.

Things then got even more stupid, somehow, as the marshall turned the overreaction knob to Eleven:

Outside, the marshal called for backup. He is heard saying to her that he had given her orders to leave, and Ms. Hargrave, standing in the dark against a car, replied, saying she was “walking and asking you a question.”

The officer's arrest report said Hargrave had to go to the pokey for "remaining after having been forbidden" and "resisting an officer," although in a remarkable act of restraint, he somehow refrained from accusing her of assault with a deadly thesaurus or High Treason. Abbeville's city attorney and prosecutor, who is blessed with the admirable name Ike Funderburk, later said that after seeing the video, he decided not to pursue charges, and that the school board wouldn't press charges either:

“I have been to hundreds of school board meetings and I saw nothing from her conduct that was different from any of the others I have seen,” Mr. Funderburk said. “I concluded there was no criminal activity on her part.”

Good on you, Ike Funderburk! IKE FUNDERBURK, everybody!

School board member Laura LeBeouf, who voted against renewing Puyau's contract, said Hargrace was a "great teacher" who'd been named teacher of the year at her middle school in 2016. She also confirmed that teachers hadn't had a pay increase in 10 years and called Hargrave's arrest a "disgrace," because isn't the point of a public meeting for the public to say things?

Radical talk, that. Besides, how else are small-town cops supposed to get their "STOP RESISTING" jollies? At this point, our only hope is Ike Funderburk.

Yr Wonkette is supported by reader donations. Please click here to help. STOP RESISTING the urge to send us money!