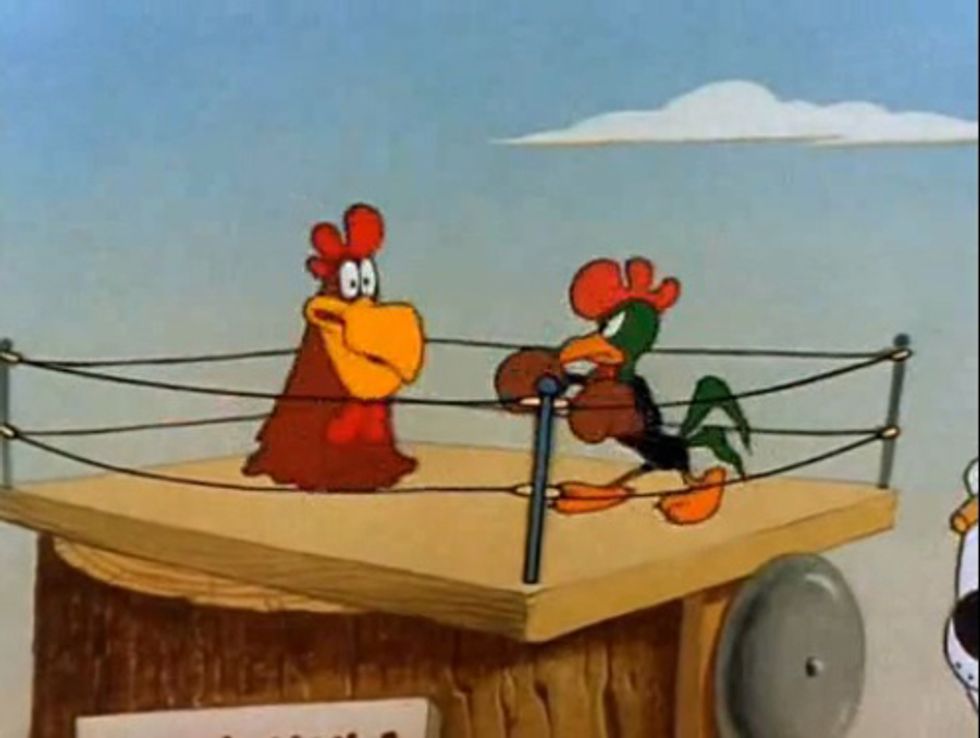 Let's all take a moment to applaud today's Hero of Limited Government, Louisiana state Sen. Elbert Lee Guillory, who objected Tuesday that a new bill to ban cockfighting is overly broad, because it would infringe on the rights of the completely legitimate sport of "chicken boxing," which is a totally real thing and not at all something someone made up in order to try to get around laws against cockfighting. Sen. Guillory opposes a bill that would strengthen the state's 2008 ban on cockfighting by expanding the definition of "chicken" to include other birds, like roosters or game fowl. (This being a Bible Belt state, it's a surprise the bill didn't also include bats, whichLeviticus 11:13-19 says are birds, and unclean at that.)

But there's a problem with such a broad definition, says Guillory, because it would outlaw the totally-not-cockfighting sport of 'chicken boxing," which he explained thusly:

“Instead of a blade or exposed spur, they hit each other with these boxing gloves on, which is quite safe,” Guillory said after the hearing. “There’s no blood…

“There is a legitimate sport known as chicken boxing. It has nothing to do with cockfighting, and it is clear that this bill would interfere, would criminalize that legal enterprise.”

We completely believe that this is a real thing, just like the variation of dogfighting where pit bulls just debate each other.

The bill's sponsor, Sen. J.P. Morrell, had introduced it to close loopholes in the existing law; Morrell was skeptical about the prospect that fighting cocks were going around with itty-bitty boxing gloves on their claws.

"I have no knowledge whatsoever on chicken boxing so I cannot speak to that," Morrell said. "I have never heard of that. It sounds like something to circumvent cockfighting."

Guillory insisted that it's totes legit, and that it's a little like kickboxing, only for chickens, and it's not animal cruelty because there are veterinarians on hand.

A representative of the Humane Society of the United States said in an email to the AP that there's no such thing as chicken boxing, which he claimed "is just a creative excuse the cockfighters have come up with to mask their real agenda, which is to maintain the weakest penalties for cockfighting possible." That sounds pretty cynical of him, not to trust the word of the chicken boxing community and its supporter(s) in the Louisiana Senate.

Guillory said that the new definition would harm his district with its colorful heritage:

"I represent a rural area where people raise a lot of chickens, including chickens that are 15th- and 20th-generation fighting birds that are exported legally and legitimately to other nations."

Morrell said it was illegal to raise chickens for fighting.

"These are not fighting chickens," Guillory replied.

This is just one of those wonders of America, where you can learn about a beautiful cultural tradition -- chicken boxing -- that goes back for generations without anyone having heard about it before. We bet Ken Burns will do a documentary about the great chicken boxers of the past.

The bill advanced from committee into the Senate, but there are still advocates for the noble art of bird-murdering, like James Demoruelle, who defended conventional, non-gloved cockfighting saying that it can't be cruel since God made roosters aggressive and they're just behaving naturally. They only fight when they feel like it, after all:

“God put the fight in the chicken, not man,” he was quoted as saying. And now we have reached a new frontier in creationism -- Mr. Demourelle doesn't just deny natural selection, he denies that there's even such a thing as artificial selection, or "animal breeding." Nobody can explain that.

Maybe Sen. Guillory can get some tips about defending the basic freedom to enjoy blood sports from Iowa Rep. Steve King, who knows that liberals care more about dumb animals fighting than they do about those guys who get away with stuff like this:

liberals have so devalued life, that a man can rape a young girl, kidnap her, force her to undergo an abortion across state lines, and then “drop her off at the swingset….and that’s not against the law in the United States of America.”

Just replace "dogs" with "chickens," and there you go, Sen. Guillory. If Louisianans will believe chicken boxing exists, they'll probably buy that, too.

Follow Doktor Zoom on Twitter. He swears he was only going to give noogies to those baby harp seals.