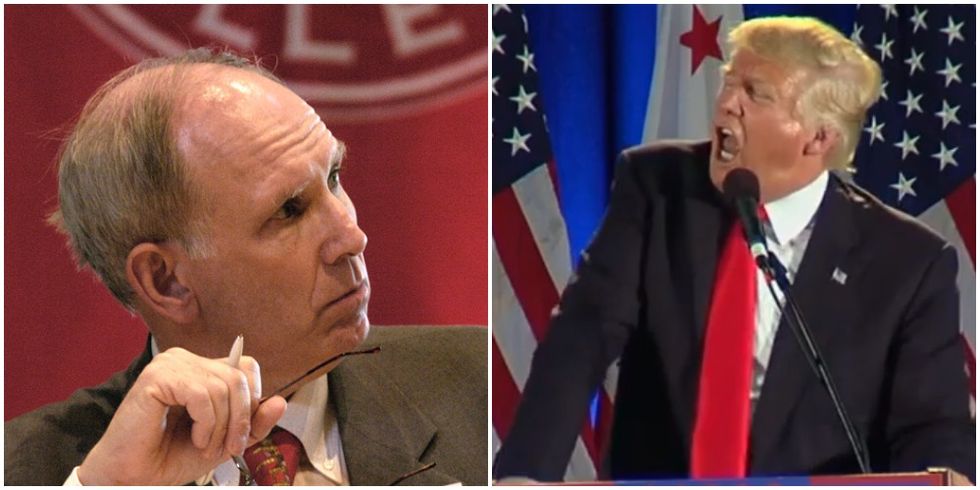 Everybody knows one of Donald Trump's favorite things to say is that he knows more about ISIS than the generals know. It's silly and laughable on its face, for a guy who's spent his life bankrupting tacky businesses and ogling his hot daughter to say something like that. But Trump knows everything, according to Trump, so he must be an expert on ISIS and foreign policy too. He also gets REAL mad that sometimes the U.S. Military telegraphs what it's going to do beforehand, and says military leaders like George Patton and Douglas MacArthur (Trump has seen them in the movies once or twice) would be "spinning in their graves" if they could see how dumb and stupid our military is these days.

[wonkbar]<a href="http://wonkette.com/607418/martha-raddatz-yanks-talking-stick-from-hillary-to-splain-donald-trump-what-war-is"></a>[/wonkbar]A delightful moment of the second presidential debate was when moderator Martha Raddatz got sick and tired of Trump's bullroar and explained to Trump that sometimes that's how war works, DUMBASS.

Well, now Trump gotten himself into an actual bicker-fight with a real live human military expert man, retired Army Col. Jeff McCausland, who was quoted in the New York Times saying Trump's ignorance on why we might warn Mosul beforehand that we're going to fuck it up with bombs just shows he "doesn't know a damn thing about military strategy." The Times gently and slowly explained that good reasons for signaling attack are to "reduce civilian casualties, isolate the enemy and instill fear within its ranks."

But remember how Trump knows everything? Yeah, that. Trump's response to McCausland, which he gave to ABC's George Snuffleupagus, was that "[y]ou can tell your military expert that I’ll sit down and I’ll teach him a couple of things." Big words from such a tiny-handed, weak-willed coward of a man! Maybe they can have a meeting so Trump can puss out RIGHT TO MCCAUSLAND'S FACE!

Col. McCausland has responded, and it is LOVELY:

“I can’t wait to sit down with Mr. Trump and hear what he has to teach me about military strategy. I’m happy to compare my record of over 45 years working in national security affairs with his any time. First, let’s review Donald Trump’s record on military strategy.

THAT'S RIGHT, BECAUSE ONE OF TRUMP'S HIND PAWS WAS ACHY DURING THE WHOLE VIETNAM WAR.

During the primary campaign, Mr. Trump also made it very clear that he had no understanding of the nuclear triad or nuclear strategy. This is perhaps the most important thing any potential commander-in-chief needs to understand.

BECAUSE HE'S A FUCKING MORON.

McCausland goes on to LOL at Trump's suggestion that we should have stolen all the oil out of Iraq, like by putting a hose in the ground and running across the Atlantic Ocean to America with it over our shoulders. He says he "cannot imagine that the population of Iraq would have stood idly by while the United States looted the country of its most precious resource." Especially after we had just liberated Iraq so good!

He then explains why, specifically, we (by which he means "the Iraqis," mostly) cannot do a "sneak attack" on Mosul, like Trump wants:

In preparation for the offensive, the coalition dropped millions of leaflets over Mosul. This was done to reassure the civilian population that they would be liberated, hopefully serve to reduce collateral damage and provide them guidance on how to best protect themselves and their families. It is clearly the desire of the U.S. and Iraqi governments to eliminate collateral damage to the civilian population of Mosul. We do not want Mosul to look like Aleppo. Finally, it’s impossible to mask the fact that you’re hiding thousands of troops in the desert outside Mosul as you prepare for the attack and secure bases in the area for logistical support.

Donald Trump might be confused why you can't hide thousands of troops in the desert, and he could learn why, but in order to do that, he'd have to have at least the attention span of a fruit fly and the reading proficiency of a 5th grader as you can read from this usa casino website for more about this.

McCausland closes by telling Little Trump a story about how his beloved General Patton did the same thing during World War II, reasserts that Trump doesn't know shit from shinola about shit, and we assume in the original draft, the last line of the response was "Also too, get fucked," but a copy editor probably took that out.

For his amazing response, Wonkette awards Col. McCausland all the whore diamonds he wants, and also our undying sexxxy love, the end.