Hero Minister Wants Christians To Get Spiritually 'Violent,' Because It's Working So Well In Nigeria 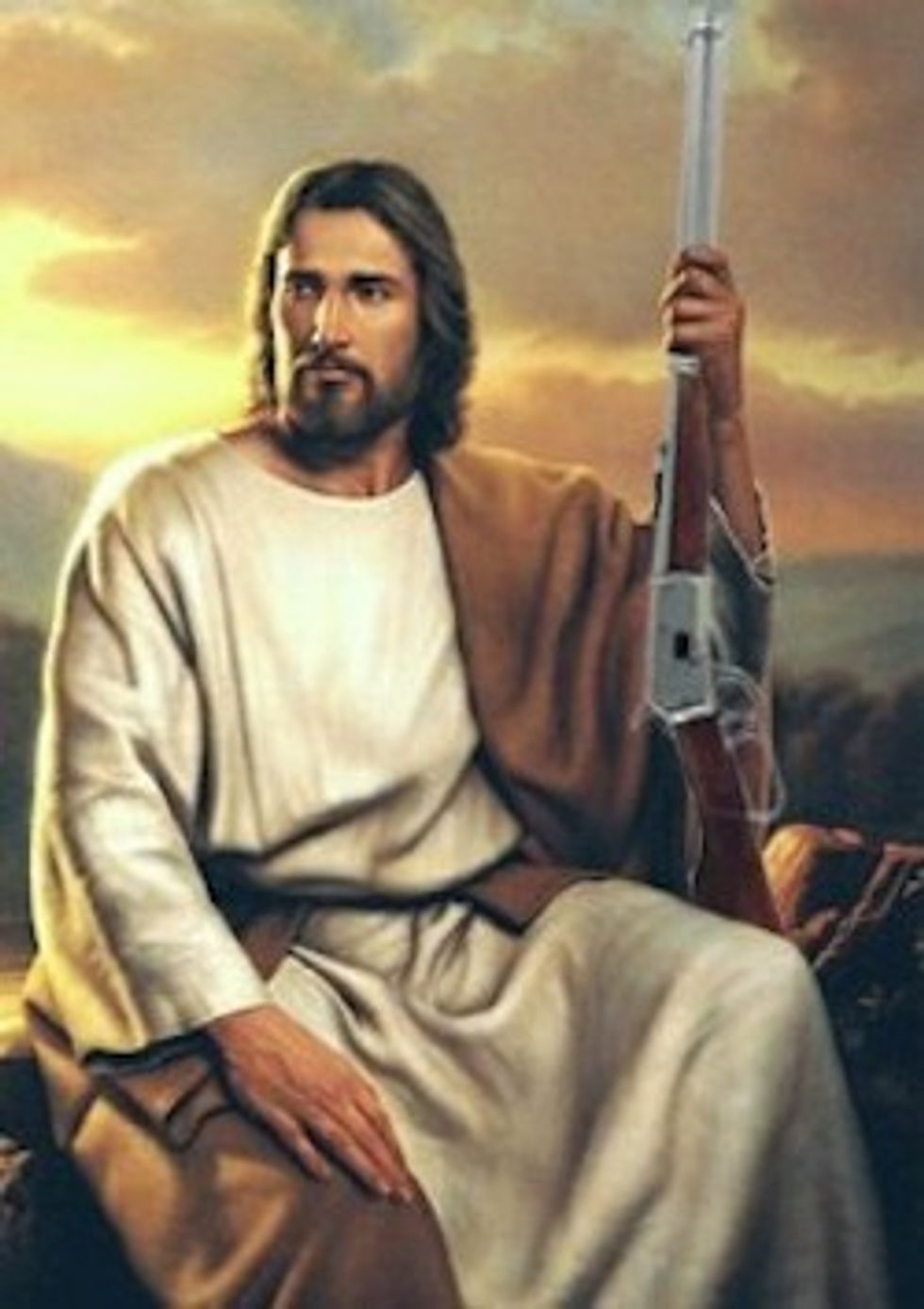 Remember John Hagee, John McCain's favorite Bible-humping lunatic pastor who, like any good Christian,believes the Catholic Church is the "great whore" and Hitler was God's personal hunter, sent to Earth to kill all the Jews except for maybe five, who were then chased to Israel so they could bring about the Christpocalypse? Of course you do! As if all of that weren't bad enough, worst of all, he is pals with Joe Lieberman.

Anyhoo, John begat a son named Matthew, and Matthew-Son-of-John seems to take after his dad in that he is a) nuts, b) very confused about Jesus, and c) super fucking nuts.

On yesterday's "Hagee Hotline," Matthew Hagee called on conservative Christians to become more "spiritually violent" in fighting against things like gay marriage and abortion because secularists who support such things have "become violent with people of faith."

Matthew-Son-of-John also cited the recent Supreme Court ruling that only whiny bitches who hate America would claim government officials starting their official government bidness with a prayer to Jesus violates the part of the First Amendment about, you know, government not doing that. There's nothing overtly sectarian about praying to Jesus unless you're not Christian, but then, as we all know, if you're not Christian, the First Amendment doesn't apply to you anyway so shut UP.

You'd think Hagee would be having a spiritual happy in his pants at the Supreme Court's thumbs up, but no. No, he is not happy, goddamnit. In fact, he thinks we should be "chilled to the bone" because the Court was split in its decision, with a mere five real god-fearing Americans protecting us all from the four godless heathen liberals, which means we are this close to government-mandated Bible burnings in the public square. Hagee says he "would be happy if it was 8 to 1 because then we would know that we have one liberal judge that we needed to get rid of." Now, Hagee didn't actually wink when he said "get rid of," but we have watched enough mobster movies to know what that means, so we're guessing that he's not suggesting if there were only one liberal judge, we'd be able to politely ask said liberal judge to resign from the Court, please, if it pleases the Court, but if not, that's okay, we're just asking politely.

Darn the luck, though, there are too many liberals on the Court to kill all at once or something, so instead, Hagee is calling for Christians to get violent in general against any heathen who crosses their righteous path because the real problem is that Christians are a bunch of pussies, apparently, who are not being "intrusive enough to make sure that our faith is established in our culture."

Funny side note on being intrusive enough to establish Christianity as the one true religion of America. Your humble Very Unserious Blogger hates herself so much, she actually watched a prayer event in the U.S. Capitol just last night, hosted by Rep. Michele Bachmann, emceed by former Gov. Mike Huckabee, and attended by many members of Congress, including Sen. Tim Scott, who led a prayer in the name of Jesus. The event also featured a wide variety of Christian fundamentalists who all declared that the United States is a Christian nation and that all laws and culture should adhere to the definition of Christianity as imagined by, for example, speaker Charmaine Yoest, president of the virulently anti-choice group Americans United for Life, just like it says in the Constitution.

The entire event was supposedly a celebration of the anniversary of President George Washington's first inauguration, but it sure seemed a lot more like a tent revival, and we kept expecting Sen. Ted Cruz and his "America is a Christian nation" dad, who performed a lovely in-the-name-of-Jesus prayer duet together, to start speaking in tongues. Also too we found it rather peculiar that our U.S. Capitol was being used by members of our government to declare that America is and should be a Christian nation, what with that whole First Amendment thingy, but oh yeah, that's all moot now -- thanks, SCOTUS! -- so while it sure seemed "intrusive," maybe that's just because your Very Serious Blogger is kinda sensitive to claims that America should be for Christians only because she happens to be a not-Christian and isn't very eager to pack up her bags and move to a country where non-Christians are more than welcome because, among other reasons, she doesn't speak Hebrew and really hates the desert.

Alas, she may have no choice, because if anyone actually started listening to Matthew-Son-of-John, it may get all spiritually violent up in here against the not-Christian heathens.

There is a value in spiritual violence, and it is time that you considered the role that you are playing or not playing and whether or not it's time for you to become more aggressive in your beliefs.

Yeah, we definitely don't want to know what "spiritual violence" means. It sounds like something you do to yourself at night under the covers after your mom has tucked you into bed, but we fear it's worse than that. So, um, maybe we'll pack a bag just in case after all.

Follow Kaili Joy Gray on Twitter. She only believes in spiritually violencing herself in the good way.