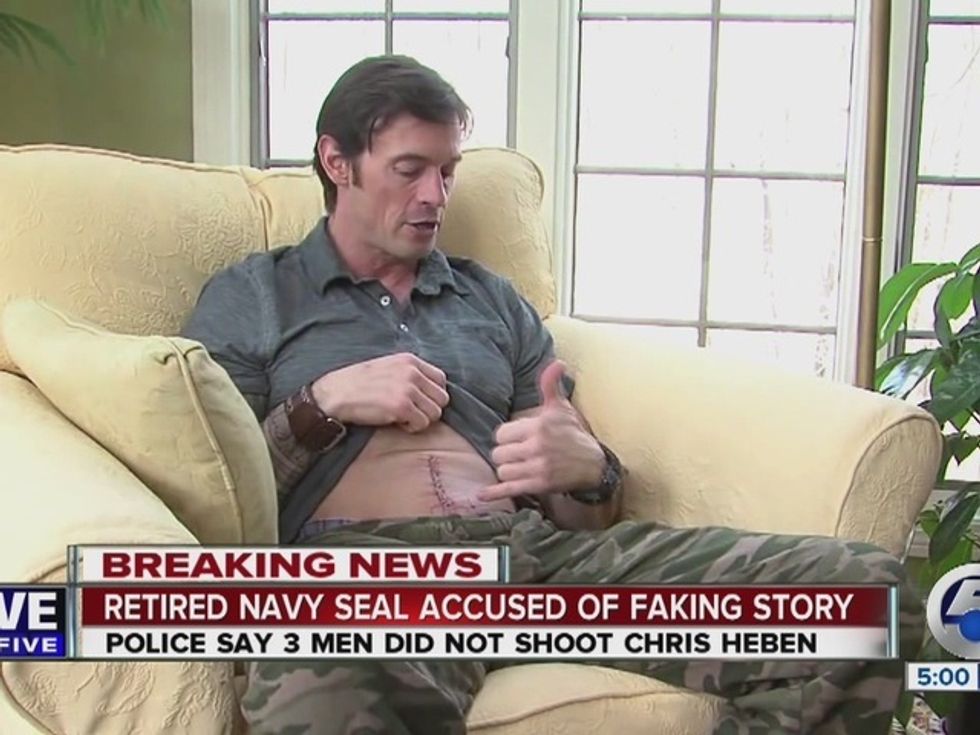 The nice gentleman with all the stitches up there is Chris Heben, of Medina, Ohio. He is a retired Navy SEAL who approaches life with the gusto you'd expect of an American Hero, which is why he has been a frequent guest expert on CNN and Fox News. As hiswebsite explains, "Immediately following the termination of Osama Bin Laden ... Chris emerged as the news media's most featured special operations subject matter expert."

So it should be no surprise that, just like the American Patriot Hero that he is, when Chris Heben somehow ended up with a gunshot wound to his abdomen, he completely fabricated a story about a run-in with a group of racist black thugs who almost ran over him with their sports car, taunted him and yelled profanities at him, shouting, "You got a big mouth white boy. You need to learn some f*cking respect,”* and then shot him in the stomach. Because he was such a tough guy, he then chased after the men in his car until he realized that his injuries were life-threatening, at which point he gave up and went to a fire station for help. Here's his exciting narrative from an early story on his ordeal, right after the news broke back at the end of March this year:

How tough is Chris Heben? So tough that he didn't even call 911, as he explained at the time. Instead, he plugged the bullet hole with his fingers and drove after the thugs so he could catch them and dispense his own brand of justice, or at least get their license plate numbers. Why?

"I wanted to keep it on the down low. At that point in time, I did an immediate physical assessment and I was still functioning. Plus, I wanted to chase after these guys. I'm aggressive," Heben said.

Comments left on a Facebook photo of this brave hero in the hospital praised Heben for his courage and toughness, and decried the fact that he'd defended America all over the globe, only to be shot down by punk thug criminal scumbag pukes who needed to be hunted down like animals.

Sadly, Heben's story fell apart as Bath Township police went and investigated it, rather than just going out to find some black thugs to pin charges on like they were supposed to. This is a historic problem with attacks by imaginary black people, it seems, and so Heben was charged last week with "misdemeanor counts of falsification and obstructing official business." Among other problems with his story, the shopping center's 6 to 12 security cameras don't seem to have recorded the incident. Which definitely happened because he is a hero.

Police Chief Mike McNeely, who back in April expressed astonishment that someone could "serve their country and be treated like this at home," now says that Heben is a lying liar what lies a whole lot:

"We have overwhelming evidence based upon video, cell phone records and interviews that the shooting did not occur in the West Market Plaza and that Mr. Heben made false allegations to us" [...]

McNeely acknowledged Heben suffered a gunshot wound and a brass projectile was removed from his abdomen, but officers said the investigation made it clear the shooting did not happen in the parking lot.

The chief would not speculate as to why Heben would make up an elaborate story. He also isn't sure where the shooting happened or how.

"That's only something he can answer," McNeely said.

Since the charges were announced, Heben continues to get supportive messages on his Facebook page from people who simply cannot believe the police would make up such unbelievable, awful things about a True American Patriot. They urge everyone to keep a clear head and to respect Mr. Heben's due process rights. Heben is also explaining why ISIS is the real face of Islam, because of course there are no moderate Muslims, and no Muslims have condemned ISIS. Needless to say, comments critical of Mr. Heben don't stay up long.

Also, too, Heben also has three prior convictions for "forgery related to perscriptions [sic] of controlled substances."

And here's a real puzzler: Despite Heben's previous willingness to put himself forward as an expert for TV stories about brave special operators and security and why no Navy SEAL would ever vote for Obama or for Hillary (because Benghazi), he hasn't answered a single Ohio media outlet's request for an interview since he was charged. Go figure!

* This quote seems to originate with Heavy.com, which cites WEWS as its source, but the line does not appear in the current web version of the news story or in the video.