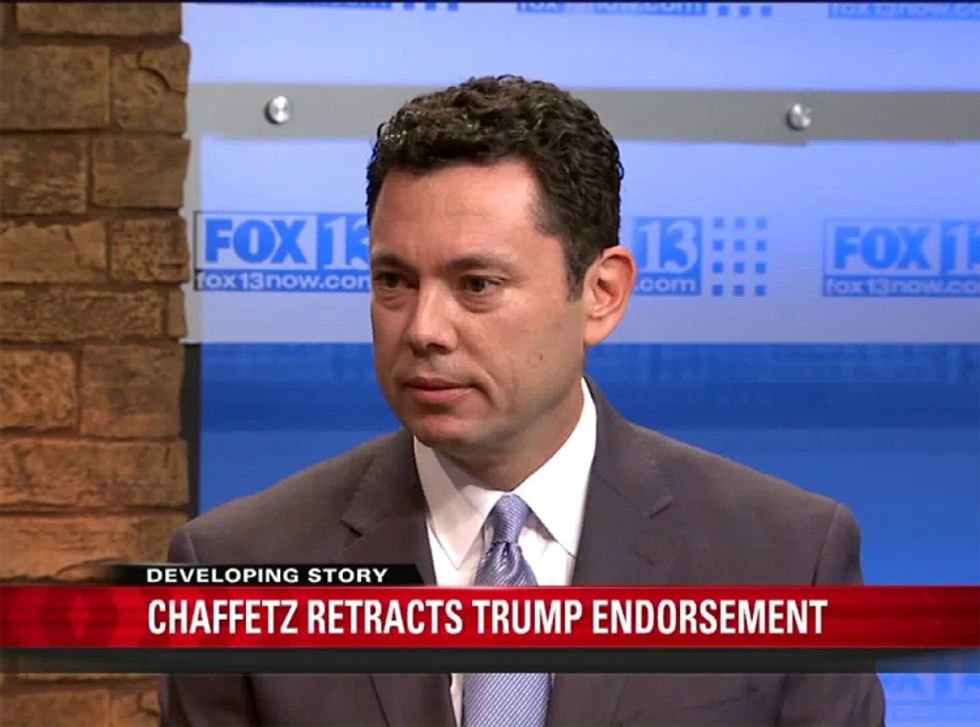 Remember almost three whole weeks ago, when Donald Trump's 2005 "grab 'em by the pussy" video outraged a whole bunch of decent Republicans who promptly dropped their support for Trump, since they suddenly discovered he was not actually the world's foremost respecter of women? As the long, long days have passed, a number of these highly principled Republicans have decided maybe they were a little too hasty, because after all, isn't there room for forgiveness in their hearts? And a vacancy on the Supreme Court? The latest Republican to reassess his hasty attack of principles is Utah congressdork Jason Chaffetz, who on the very evening the Access Hollywood tape dropped, made a great show of telling a local teevee station,

I’m out. I can no longer in good conscience endorse this person for president. It is some of the most abhorrent and offensive comments that you can possibly imagine. My wife and I, we have a 15-year-old daughter, and if I can’t look her in the eye and tell her these things, I can’t endorse this person.

It's so moving! He also said he wished a good principled conservative like Mike Pence could be at the top of the ticket, so rightwing Republicans could lose on women's healthcare instead of groping, maybe. So of course it's no surprise at all that Chaffetz Tweeted Wednesday that he'd given all this a lot of thought, and is now not quite redorsing Trump, but neither is he fully committed to that hasty undorsement:

So now he's going to cross his eyes a little funny when he looks his 15-year-old daughter in the eye. We don't know if there are special corrective lenses for that -- maybe self-certified ophthalmologist Rand Paul can help. Chaffetz is now the sixth Republican to un-undorse Trump; the others are Senators Mike Crapo, Deb Fischer and John Thune, along with Reps. Scott Garrett and Bradley Byrne. Would this be a good place for an inspirational quote from the Interwebs? We think so!

This one might be real! At least it wasn't in any of the 'fake Churchill quotes' lists we looked at.

Chaffetz was simply brimming with ideas Wednesday; in addition to his decision to vote -- unsupportively -- for Donald Trump, he also said he is absolutely Ready For Hillary -- ready to investigate her nefarious crimes for the entirety of her presidency, if she even has one (which she might not, now that Trump has one extra vote in Utah). As the head of the House Ways and Means Committee, Chaffetz has big plans!

“It’s a target-rich environment,” the Republican said in an interview in Salt Lake City’s suburbs. “Even before we get to Day One, we’ve got two years’ worth of material already lined up. She has four years of history at the State Department, and it ain’t good.”

Isn't he cute, like a kid looking forward to opening presents under the tree, and then subpoenaing all the elves and reindeer if he doesn't get what he wants?

Also, WaPo offers this fun Trivia Fact for you to astound your friends with: If the House remains under Republican control -- likely, even if Trump loses bigly, then

Speaker Paul Ryan is certainly excited about the prospects; his office issued a statement that might have been literally covered in saliva:

The rigorous oversight conducted by House Republicans has already brought to light troubling developments in the Clinton email scandal [...] The speaker supports [Oversight’s] investigative efforts following where the evidence leads, especially where it shows the need for changes in the law.

Like maybe a law requiring presidential nominees to release their emails that have already been released, only more so.

Clinton supporters in Congress expressed dismay at the prospect of Republicans pre-peaching Clinton. Maryland Rep. Elijah Cummings, a badass as always, pointed out that if there's anything the fiscal conservatives love, it's spending more money on yet another Clinton investigation:

“Republicans are pretending like they haven’t been investigating Secretary Clinton for years ever since she announced that she was running for president, including everything from Benghazi to emails to the Clinton Foundation,” Cummings said in a statement. “It’s no exaggeration to say that on the first day Secretary Clinton walks into the White House, Republicans will have already investigated her more than any other president in history.”

Well, yes, but they didn't find anything to send her to jail for, so obviously they need to do more investigating. That's simply logic. Surely a grateful America will be delighted when Chaffetz demands President Clinton go directly from the Inauguration to a House hearing room.