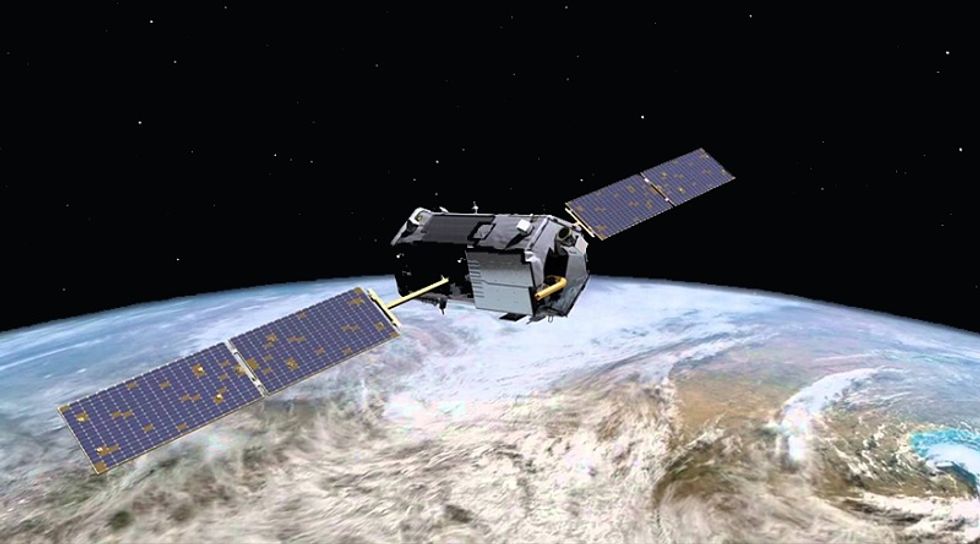 Ted Cruz is pretty darn annoyed with NASA these days, seeing as how it's just been wasting a lot of taxpayer money studying the climate and foolishness like that. For heaven's sake, everyone knows that NASA is supposed to be about space, and there is no climate in space. And that's why he was ready to give a good talking-to to NASA Administrator Charles Bolden about all these stupid satellites that NASA has looking down at boring old Earth and its atmosphere and oceans, instead of looking out at other, more interesting things that are far away. So Cruz, who chairs the subcommittee that oversees NASA, kicked off a hearing last Thursday by asking Bolden just why NASA is ignoring its key mission of doing science to things that won't cause problems for the fossil fuel industry.

Oh, and what a fine loaded question Cruz had for Bolden; it was a question designed to show what a fraud the Obama administration's budget request for NASA is, since it fritters away far too much money on Earth and climate science:

"I'd like to start by asking a general question: In your judgment, what is the core mission of NASA?"

Ooh, gotcha, Bolden. Because "climate" is definitely not one of the words in "National Aeronautics and Space Administration."

Oh, but the wily NASA guy (also Marine test pilot and real honest-to-god astronaut) was ready for the tricksy Cruz, yes he was. Noting that he went back and looked at the original legislation that set up NASA in 1958, Bolden answered, "Our core mission from the very beginning has been to investigate, explore space and the Earth environment, and to help us make this place a better place," adding (and perhaps channeling LBJ ordering pants), "So that's the nuts of it."

Aha! But there's nothing "core" about dumb old global warming, is there, Cruz fired back:

Well, there's no doubt that there are multiple important priorities within NASA. But I would suggest that almost any American would agree that the core function of NASA is to explore space. That's what inspires little boys and little girls across this country. It's what sets NASA apart from any other agency, is the mission that has landed man on the moon, that has the potential to explore new worlds beyond our imagination.

You can almost hear the Star Trek theme rising in the background there, as Cruz reminds the stupid old astronaut that he's supposed to be inspiring kids, not mucking about with measuring atmospheric CO2 levels, because what little boy or girl was ever inspired by that? "I am concerned," Cruz said, "that NASA in the current environment has lost its full focus on that core mission."

Cruz was very unhappy that between 2009 and 2016, Earth science has had an increase of 41 percent, while the budget for human exploration of space has actually been reduced. What a shame. Where is the glory? Where are the spacesuits, for godssake?

Bolden notes that this is pretty much what NASA was aiming for when it retired the Space Shuttle -- a beautiful, inspiring, but ridiculously expensive hunk of obsolete 1970s technology that "cost us $2 billion a year to maintain...whether we flew it or not." Exploring farther out into space with robotic probes, on the other hand, actually is giving us bold new discoveries at a fraction of the price.

As for Earth science, Bolden is proud of that mission, too, since it has "enabled us to understand our planet far better," a role for science that is "absolutely critical." Heck even Texas -- home not just to Canadian refugees like Cruz but to actual space explorers like Bolden -- has benefited from NASA's Earth missions, which helped determine that too much pumping of the aquifer was causing the level of the ground to sink, with effects on Earth's gravitation that are measurable from space. Now that should give you a sense of wonder and inspiration.

Not that Cruz was impressed. Again, why is Barack Obama cutting budgets for sending humans to Mars, which is undeniably cool, and wasting it on climate science, which is not cool, not one bit?

Bolden said that just maybe, doing something about climate change does work into the big inspirational space exploration picture:

We can't go anywhere if the Kennedy Space Center goes underwater and we don't know it -- and that's understanding our environment... It is absolutely critical that we understand Earth's environment because this is the only place that we have to live.

Bolden then glanced around the hearing room and noted that he didn't see anyone else there who has seen the planet from space, adding:

Cruz was all out of boys and girls in astronaut costumes by that point, and couldn't even manage a "boldly go where no man has gone before." He just moved on to the next witness.

Point, Bolden. You want inspiration? This is the only planet we've got, this pale blue dot:

It would probably be a good idea not to make it unlivable (at least for large mammals like humans) for the sake of a few more decades of oil and coal industry profits.