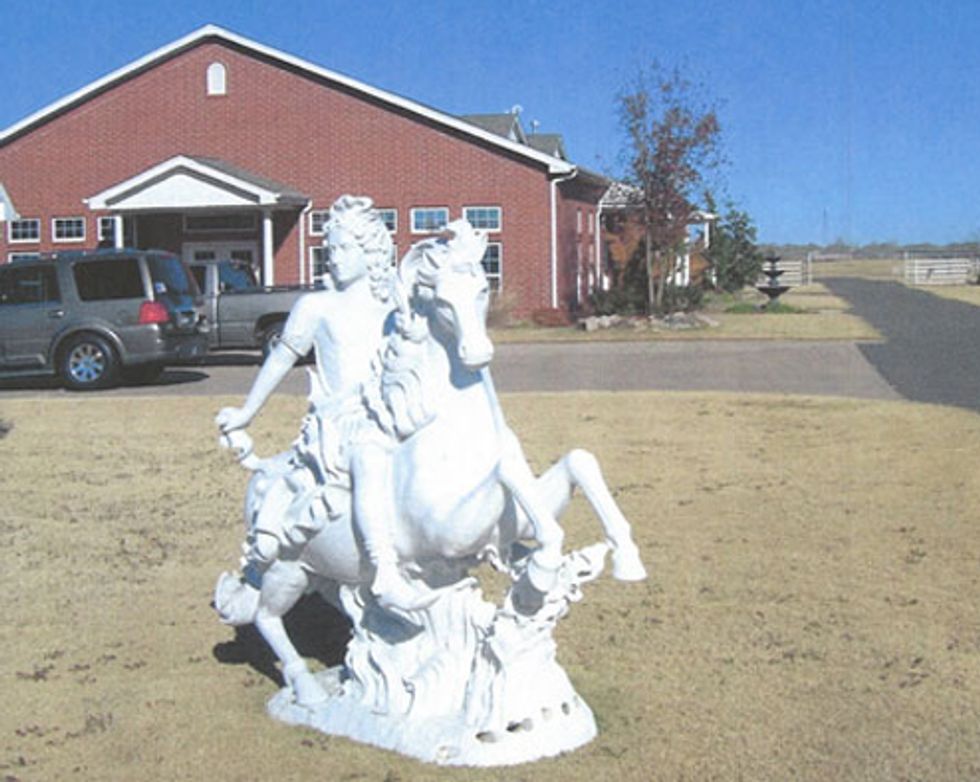 An unspeakably ugly one-ton statue has been stolen from the home of former Miss Oklahoma, orange juice peddler, and anti-gay activist Anita Bryant in Oklahoma City. The $30,000 lump of marble was taken May 25th, although Oklahoma TV station KOTV only ran the story Monday, possibly to give the Hostage Statuary Recovery Team a chance to work, we don't know. The artwork, if one doesn't mind using the term loosely, was stolen sometime during a 3-hour window when Bryant and her husband, Charlie Dry, were away from home, and whoever took it would have had to use a forklift and a large truck to move the thing.

Mr. Dry no doubt won beatific smiles and nods of approval by noting,

"People work hard for their possessions and to have someone just come and take stuff," Dry said. "I'm from a small town and them is shooting days right there."

Sheriffs' deputies have no leads in the case; it is unclear whether the piece was taken by an aficionado of terrible art, or by a crazed gay activist bent on destroying the life of a woman who only had decency and morality in her heart when she campaigned against gay rights in the late 1970s. It probably makes a better story to assume the latter, and we can hardly wait for Todd Starnes or the Stupidest Man on the Internet to blame radical gay rights jerks (and yes, if it turns out to have been radical gay rights jerks, then that was a jerky thing to do ... OR WAS IT?)

A Kickstarter to send Anita Bryant to art appreciation classes has been set up in the wake of the tragedy.

Follow Doktor Zoom on Twitter. He may not know art, but he knows hideous when he sees it.