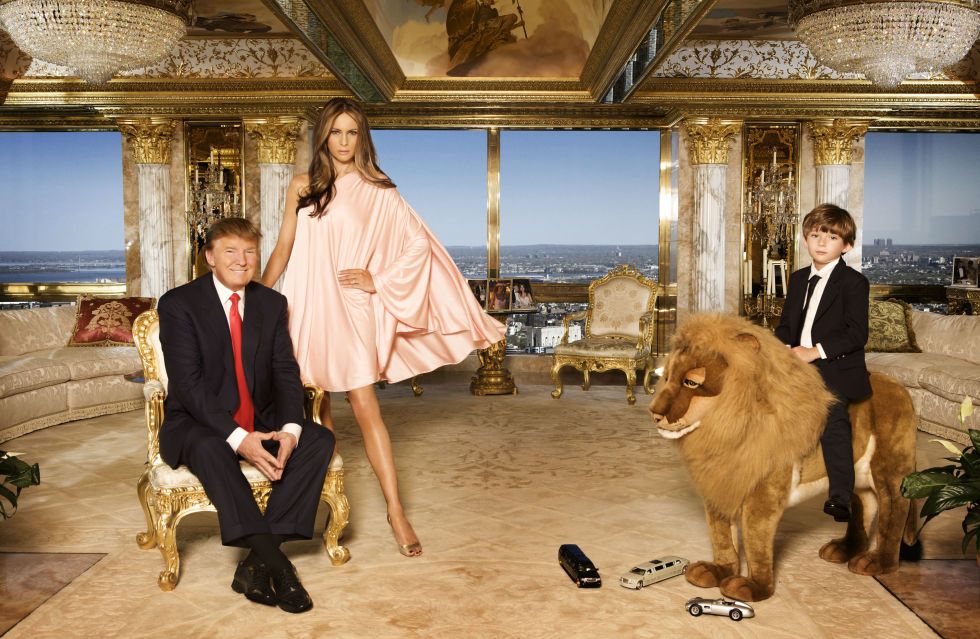 Somebody needs to look out for the little guy. That lion might eat him.

One of the GOP's greatest achievements was convincing their voters that the estate tax is a terribly unfair thing that might affect ordinary Americans and keep their children from inheriting their parents' farms and small businesses. When Frank Luntz eventually shuffles off this mortal coil, it's safe to say that his renaming the estate tax the "Death Tax" in the 1990s will make the first paragraph, if not the first sentence, of most obituaries. Hating the estate task is an obligatory part of being a Republican, just as pointing out how insane that is is an essential part of progressivism, since only the very richest families -- .18 percent of them -- ever have to pay it. So of course it's no surprise that, while waiting on Congress to get around to repealing the estate tax altogether, Donald Trump is jonesing to roll back Obama administration rules aimed at closing loopholes and requiring more uniform enforcement of the estate tax, because aren't the super-rich already burdened enough?

The rules the Trumpers want to ax were aimed at standardizing who would pay estate tax, cutting out some of the loopholes that rich families with especially creative accountants and lawyers have used to estimate their estate's worth, and thereby avoid or reduce a postmortem tax liability. Obviously, making everyone pay the same rate is just not fair.

Again, let's just emphasize how few people actually have to think about estate taxes, which have been cut back by successive Republican administrations since Reagan. If you're not leaving more than $5.5 million to your heirs, after some hefty deductions (including ones for farms and small businesses!), you are not hit by the estate tax.

Nevertheless, the supposed "threat" to small businesses and family farms is the main R talking point in favor of eliminating the estate tax, or at least not enforcing it as strictly as the Obama rules would have. Which makes perfect sense -- the Washington Post estimates that 13 of Trump's 24 cabinet members have enough wealth to be subject to estate tax, and they represent ordinary Americans, now don't they? Oh look, a quick case study:

Hmm. Guess that depends on your definition of "many" -- again, going back to the Tax Policy Center, Your average small business or family farm isn't affected at all by the estate tax: Only about 80 farms or "closely held businesses" will face estate tax in 2017. In the whole damn country. Your farm or family business has to be obscenely rich to face estate tax; the center estimates that "small farms and businesses will pay $30 million in estate tax in 2017, fifteen hundredths of 1 percent of the total estate tax revenue." So probably not a lot of ordinary folks having to sell off Bossy the Cow or Screech the fax machine to pay their estate taxes.

Hey, how about Stephen Mnuchin?

Mnuchin's reported net worth of $621 million would make his estate liable for the tax if he were to pass away. Whether the Obama administration's new rules would increase his estate's bill if his department allowed them to take effect depends on whether he is using a certain legal strategy to save money. That information is not publicly available.

The Obama rules that the Trumpers want to scotch are aimed at creative appraisals of an estate's value; we won't go into the details because accounting jokes aren't really our strong point, on balance (see?). The rules would close a loophole that super-rich people use to devalue liquid assets like stocks and bonds that they shouldn't have been able to, potentially reducing the on-paper value of their estates by as much as a third of their real worth. Sure, it's cheating, but it's legal cheating, so it should be encouraged, especially since it's only a matter of time until Congress murders the estate tax altogether.

[wonkbar][/wonkbar]Oh, there's one small bit of good news in all this: Since the Trump administration has done such a piss-poor job of appointing staffers to all departments, there's currently nobody in the Treasury Department to actually rewrite the rules Trump's people want to get rid of. Trump has nominated someone to be assistant treasury secretary for tax policy, but the nominee, David Kautter, hasn't gotten a confirmation hearing in the Republican-led Senate just yet. Oopsies. Better blame Democratic obstruction again!

Yr Wonkette is supported by reader donations. Please click the "Donate" clicky to help! You could also consider leaving us everything in your will, especially the contents of your wine cellar or your comic book collection. Where's our Joan Kroc?