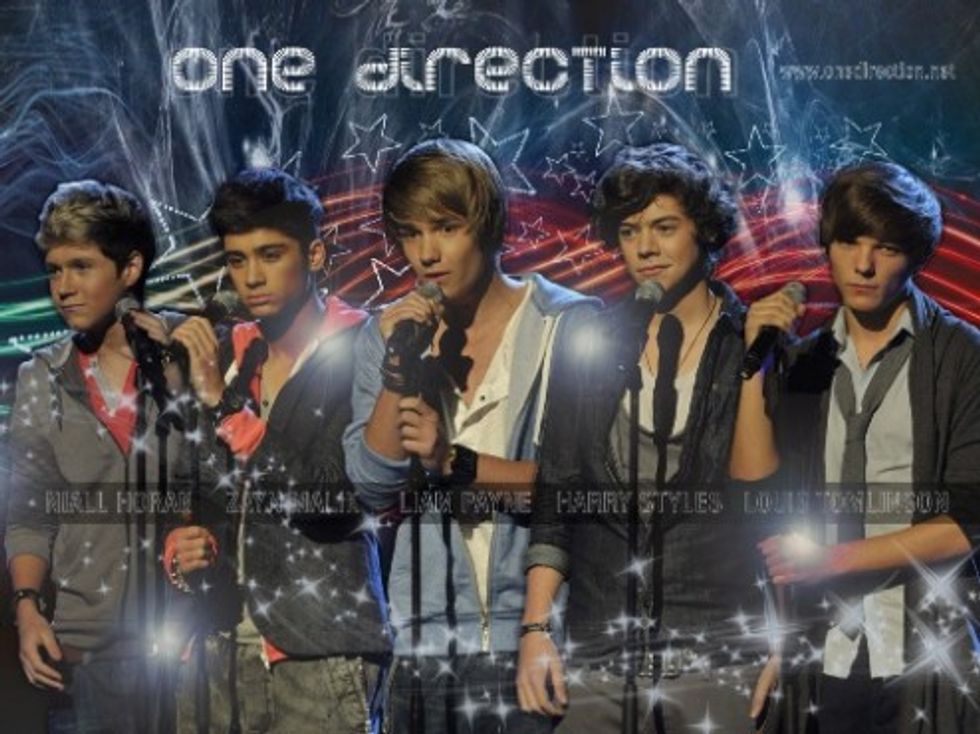 Insane nutbag Debbie Schlussel, whosetwitter bio reads like a mad libs experiment gone awry (she's a movie critic AND a cultural observer AND a writer AND a journalist AND a terrorism expert. SUCK ON THAT LIBTARDS), has expanded her cultural observation powers to include the world of tween pop. Yes, Debbie Schlussel is here to warn parents that a member of boy group One Direction (we know who they are because we do not live in a cave, but we are not 12 so we have no idea which one is which either) is a muslin who wants to jihad and sexytime your daughters:

And the scary thing is that millions of girls in America and around the world are infatuated with the members of One Direction, including Malik. He’s no dummy. He knows the power he has over these mindless girls and is using that influence to preach the Islamic faith to them and try to convert them. It’s dangerous. And there’s a reason he tweeted that he didn’t have a girlfriend on the same day he tweeted Islamic preaching. Hey, if you convert to Islam, you can be my girltoy. And it appears that Malik, after he was did well on Great Britain’s “X Factor,” was chosen for the boy band specifically because he’s a Paki Muslim, to appeal to that rapidly growing demographic in the UK. Managers, marketers, record companies, and agents aren’t stupid. They know that Islam sells in Britain, and they picked an Islamic face for the band. Who cares if he’s trying to convert your daughters? They gotta get paid.

Boy band producers. History's greatest monsters, or greatest-est monsters? They pick band members to appeal to certain demographics. HAVE THEY NO SENSE OF DECENCY?

Can you imagine the kind of brain one must possess to make the leaps Schlussel does? No, because you are not a movie critic and attorney and writer and proud American and investigative journalist. Also because YOU ARE NOT INSANE. Try to follow along as we explore the mind of Schlussel. First, you apparently have to troll the twitter feeds of cut-rate Bieber boys (no, thank you. WE SAID NO, THANK YOU). Next, you have to take the relatively innocent twitterings of a tween star who happens to be Muslim and occasionally tweets about his faith in the most generic way possible (he believes in Allah! He fasts!) and decide that this is for sure a call to jihad. Then, in referring to the young man, you have to casually drop the word "Paki," which -- help us out, Britishers -- we believe is considered a slur in Great Britain? Then, you have to keep trolling that twitter feed and figure out that on the VERY SAME DAY as the jihading, Muslin Bieber also happend to respond to a twitter query to admit he is not currently in possession of a girlfriend. After all that work, you have to put those tweets together (in a handy screenshot for your readers!) and conclude that these are coded messages to the young ladies that if only they'd be a muslin too, they could get it on with one of the dudes from One Direction (no we are still not sure which one is which STOP ASKING).

You know what? This level of crazy is too much work, and it involves reading the twitter feeds of teenagers. We're more into a sort of retro Hunter Thompson-esque sort of thing where we drop a metric fuckton of acid and drive to Vegas. We're gonna get on that right now.