Hey, How About Trump Appoints Sylvester Stallone To Run National Endowment For The Arts? Classy! 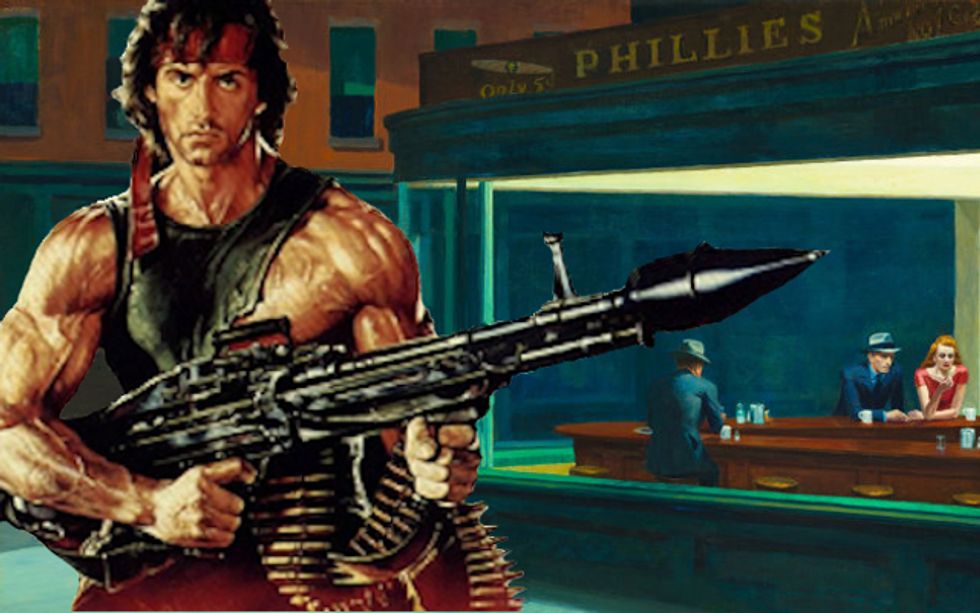 Do we get to blow a door into the diner this time?

Now here's some transition news we totally believe, since it comes from no less authoritative a source than the Daily Mail, which would never stoop so low as to make stuff up for the hell of it: Donald Trump is supposedly considering Sylvester Stallone to head a government agency, probably the National Endowment for the Arts. Say goodbye to your Piss Christ and your elephant-dung Virgin Mary, and get ready for art that celebrates manliness, fistfights, and stuff blowin' up all over. Just look at the solid journalisming here!

While Stallone is positively disposed to the idea, It is not known whether Stallone will accept the gig. He has spoken previously of his admiration for Trump -- and of his interest in entering politics.

'It's been widely and wrongly assumed that a Trump Presidency will be hostile to the arts,' a source told DailyMail.com. 'But Mr Trump feels this sort of A-list appointment is precisely the shot in the arm that the industry needs.'

Yup, the Arts industry. We so completely buy this story. After all, it even has this very artsy quote from Sly Stallone himself:

'I love Donald Trump,' he told Variety Magazine. 'He’s a great Dickensian character. You know what I mean? 'There are certain people like Arnold, Babe Ruth, that are bigger than life. But I don’t know how that translates to running the world.'

Huh. We don't know how exactly Stallone's using "Dickensian" there. Maybe "prone to spontaneous combustion," like [spoiler warning] the pawnbroker of Bleak House? Or "insanely optimistic no matter how disconnected from reality" like Mr. Micawber in David Copperfield? Or maybe simply a rich asshole who longs for more poorhouses and prisons, like that Ebenezer Scrooge guy from How The Gingrich Stole Christmas?

Still, the Daily Mail piece does at least have pretty solid information on what the NEA is and does:

Formed in 1965, The National Endowment for the Arts is an independent federal agency that funds, promotes, and supports everything from museums and opera to folk music, dance and design. Its current head, the artist and philanthropist Jane Chu, heads a 14-strong board who can draw upon an annual budget of around $146,200,000.

Folks at the NEA was none too happy about getting booted out of the Old Post Office Building to make way for the Trump Hotel.

They was, was they? Well, consarn it, Sly Stallone will teach them a thing or two, possibly through the manly art of arm rasslin', like in that one movie he was in with the arm rasslin'.

We wouldn't waste much money betting the Daily Mail has this one right. Why, just yesterday the scuttlebutt was that Kanye West would be chosen to run the agency! The closest their reporting might come to reality is that Trump will decide both the NEA and its sister agency the National Endowment for the Humanities belong among The Expendables. That, or the entire budget will be redirected to gold-plating the Washington Monument.