Hey, Maybe These 'Sovereign Citizens' Might Be, You Know, Dangerous? 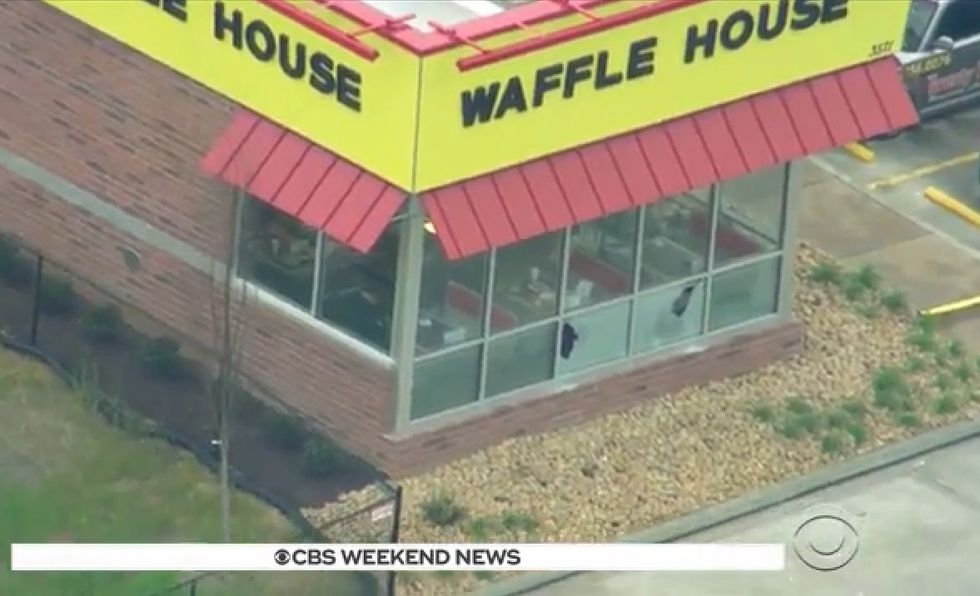 Maybe don't give the White House intruder guy his guns back?

Now that police have arrested Travis Reinking, the suspect in the murders of four people at a Waffle House near Nashville, we may be a little closer to finding out more about his motive, although the New York Times reports that after his arrest, Reinking was refusing to speak with detectives. There's justified speculation that Reinking may be a member of the "sovereign citizen" movement, since when he was arrested trying to barge into the White House last July, he told a Secret Service agent that "he was a sovereign citizen and has a right to inspect the grounds," as the arrest report put it. And as JJ MacNab, our go-to expert on antigovernment groups, pointed out yesterday, in a 2016 incident report back in Illinois an officer wrote, “Travis is hostile toward police and does not recognize police authority. Travis also possesses several firearms,” which has a decidedly sovereign citizen vibe.

However, before we delve into just what a toxic brew of rightwing fantasy and real-world violence the sovereign citizen movement is, one quick word of caution, as Mark Pitcavage, a senior research fellow at the ADL's Center on Extremism, points out: It's early going, and despite Reinking's statement at the White House, it's also possible that he has no real ties to sovereign citizen ideology. Pitcavage explains on Twitter that he's seen

There may be no greater significance to Reinking's statement than just a general belief that as a citizen, he has the right to wander around the White House. Like Reinking's delusion that he was being stalked by Taylor Swift, it could be a coincidence that he fixated on that pop star, or as we noted yesterday, it could mean he's aware of the "kidding on the square" neo-Nazi meme that Swift is an Aryan goddess of some sort. We just don't know yet. If Reinking insists on running his own defense and files a mountain of paperwork proclaiming the court has no jurisdiction over him because he's "redeemed" himself from ownership by the corporation known as the "United States of America," then we'll know for sure.

In any case, SovCits are freaking crazy, and while it can be lots of fun to mock their nutty pseudolegal jargon, in which names (and whether they're written in ALL CAPS, as in legal documents) and language have almost magical properties, a significant minority of them aren't just kooks trying to escape paying their debts or scam money off the government. A not-small portion of sovereign citizens literally believe that since the law and the Constitution mean exactly what they think it means, then they're justified in killing cops and judges and elected officials, who all represent the illegitimate government that enslaves them.

If you're not familiar with the bogus tenets most of these birds believe in, here's a good 'splainer of their beliefs at the SPLC, another by the ADL, and this Guardian article from last summer offering a good overview of violent incidents related to the movement. Without getting into the weeds too much, sovereign citizens believe that, thanks to a massive conspiracy, virtually all law and government is illegitimate, and that the "real" US Constitution is grounded in their own interpretation of English common law. That means that the only laws they recognize are the ones they've personally agreed to follow.

Most also think that if they just employ the right pseudolegal gobbledygook, the government can't tax or arrest them -- as we saw in the trial of the Bundy militia, even though it was plain old crappy lawyering by the prosecution, not Ryan Bundy's insistence that he was only subject to God's law, that ultimately got the charges dismissed.

Let's also not forget Jerad and Amanda Miller, whose identity Yr Editrix actually was the first to publish, because her pal Lisa Wines was good at Facebook. They were the fun SovCit couple who were kicked out of the Bundy militia encampment for being too bloody-minded, then drove from Bunkerville to Las Vegas, where they murdered two cops and killed an armed bystander who was trying to be a good guy with a gun, before Jerad died in a shootout with police and Amanda shot herself. They were bigtime Alex Jones fans and believers in chemtrails, and wouldn't you know it, Jerad even wrote an impassioned essay about the glories of killing cops, who he believed have no legal authority. In addition to being sovereign citizens and murderers, the Millers were also, like many other SovCits, perfect examples of crank magnetism, the tendency of kooks who adopt one conspiracy theory to also believe in any number of other improbable ideas.

So what other fun criming have Sovereign Citizens been up to lately?

As we say, it remains to be seen whether Travis Reinking will have his name added to JJ MacNab's tally of extremist anti-government violence, from which some of our examples are drawn; it could turn out that he's actually one of those rare instances of a mass killer who's actually mentally ill -- and there's probably a fair bit of overlap between delusional thinking and the adoption of paranoid politics, of course.

But rest easy: the Trump administration is serious about cracking down on extremist violence. At least the Muslim kind.

Yr Wonkette is supported by reader donations. Please click here to help us wrap our homes in Kevlar.