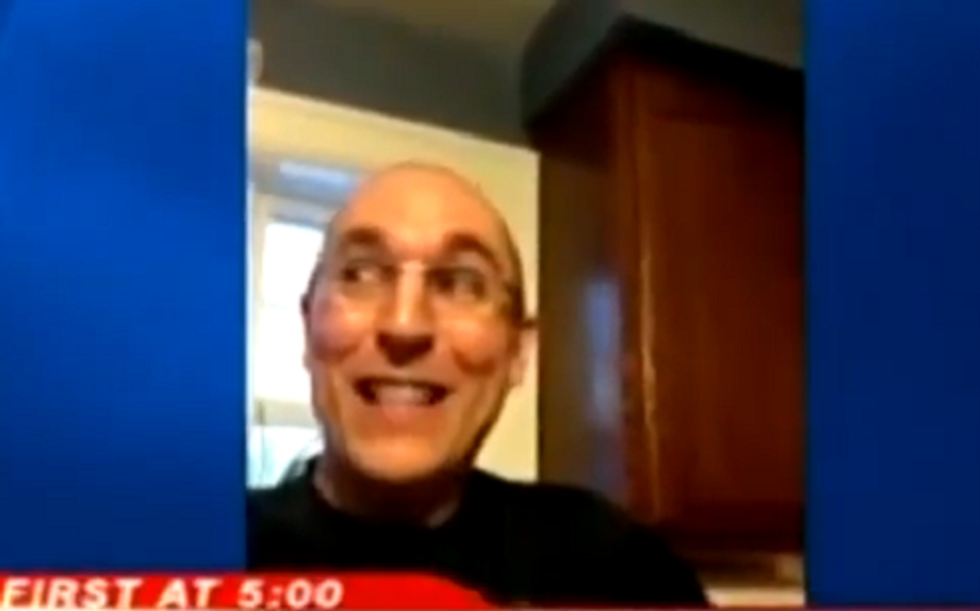 So here is one of those stories where the initial impression -- "Maybe-crazy teacher was toting around an AR-15 just like the one used in the Newtown massacre!" -- sounds like perfect Wonketfodder, and then you start looking at it more and finally you kind of throw your hands up in the air and wish you'd gone back to re-reading Scud: The Disposable Assassin, where it's clear who the bad guys are. In keeping with Wonkette Policy, we will not be making fun of possibly-mentally-ill high school teacher Steven Davis, "a beloved science and math teacher at Mount Anthony Union High School" in Bennington, Vermont. Davis surrendered a Bushmaster AR-15 semiautomatic rifle to police and was hospitalized for observation last week after neighbors spotted him carrying the weapon to his car; he also had posted several rambling, maybe-threatening videos to YouTube and his wife had taken their children from their home and gotten a protection order against him. Judges don't grant those on a whim.

So yes, scary guy, but also probably not in his right mind, at least at the time he was posting those videos (which have since been removed by YouTube). But also "beloved teacher" who was apparently well-liked and functional before whatever breakdown sent him around the bend, so Wayne LaPierre's awesome idea for a national registry of mentally ill people would have done absolutely nothing when Davis bought that gun in 2009. (One of the few brightly lit zones of moral clarity here: Wayne LaPierre sucks ass.)

Davis, who was on administrative leave from the school, posted several videos last week in which he talked about his frustrations with the school district and the teacher's union, and spoke of a plan to decertify the union and reform the schools, you know, for kids. We saw the videos before they were yanked, and while Davis looks and sounds angry and nervous, like a pissed-off guy who really, REALLY wants to make a point, and who you do not want to keep having a conversation with, he also doesn't make any explicit threats of violence. In fact, the videos are made weirder by his repeatedly saying he's motivated by his concern for the district's students and by his admiration for Martin Luther King. But then he follows a vague mention of his "business plan" for reform with this bit, which is the one snippet of video the news stories have found irresistible:

"This is all very well-planned and thought out. I've studied military tactics. And this is the way to go. It's gonna hit so hard and so fast, and shut that school system down until they get things straight."

Which seems a lot harder to write off as metaphor than saying you want to see someone's head on a stick, right?

The videos went up on YouTube the day after neighbors reported seeing Davis carrying the AR-15 to his car:

Neighbors asked police to do a welfare check on Davis after seeing him carry the rifle to his vehicle Sunday evening. Davis then voluntarily surrendered the gun, telling police he put it in the trunk of his car in order to bring it to a storage unit he recently rented...

After the welfare check Sunday evening, Davis' wife and children went to stay with a relative. She sought a restraining order the following day. In the order, his wife stated she was unaware that Davis owned a gun and said she and others have noticed a change in Davis' personality over the last month.

After viewing the videos, Bennington Police Chief Paul Doucette called Davis and asked him to come to the police station, and Davis complied; he then agreed to be voluntarily hospitalized, and he is now being held for a mental health evaluation while internet commenters call for him to never work again or for newspapers to stop making such a terrific teacher look like a psycho.

The good news here is that if Davis actually had been planning to do something with that gun other than putting it in storage, those plans were thwarted by nosy neighbors who called police, police who took the potential for violence seriously, and laws allowing someone to be involuntarily held for evaluation if they may be a danger to themselves or others. In other words, a functioning government and mental-health care system -- for a teacher who had insurance to go to the hospital in the first place! -- did a pretty good job of keeping people safe, including even the disturbed guy with the gun.

So maybe what we should take from all this is that, since most mass shootings aren't perpetrated by people with histories of mental illness, but dudes who have marital/job difficulties and then snap, violently...then maybe the lesson here is, fuck you Wayne LaPierre and your national crazy person registry.

Because obviously what we need is a national registry of people who've been fired, divorced or broken up with, or are really mad at their union and/or have VERY ANGRY thoughts about black mold.