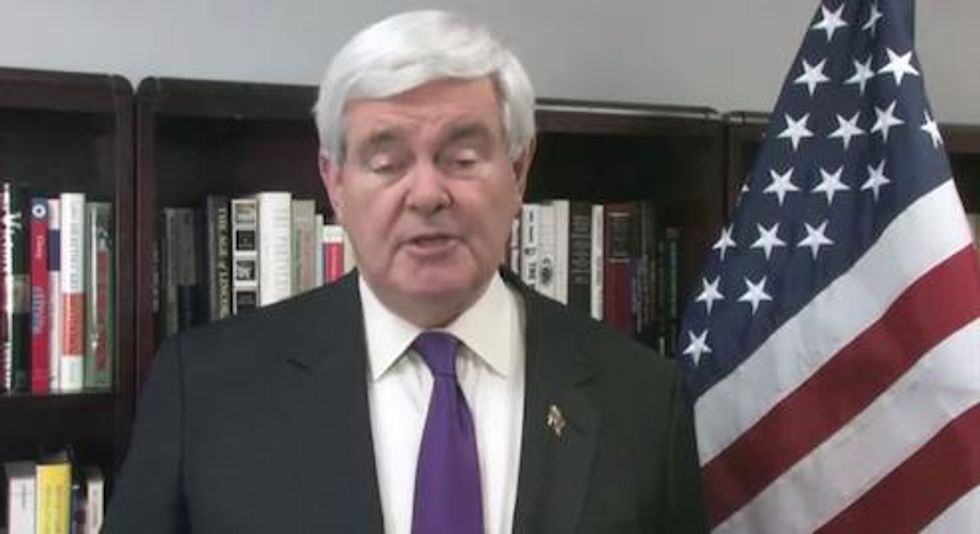 Mueller is setting up a dragnet of obstruction, financial questions and every aspect of Trump's life and his associates lives.very dangerous

See that above? That is a "tweet" from Newt Gingrich, who is most famous for being married to President Trump's new ambassador to the Vatican, Callista Gingrich. Mr. Gingrich is very upset that Robert Mueller, the recently appointed special counsel, is reportedly leading investigations into 1) the Trump campaign's secret meetings with Russia; 2) Jared Kushner's Russian shoe phone; and 3) scammy scammy oxenfree ties between Russian mobsters and/or oligarchs and every single person Donald Trump has ever met.

But DID YOU KNOW that many decades ago, Newt Gingrich was more famous for other things than "being Callista Gingrich's husband"? Well, sort of: He was mostly famous for marrying Callista Gingrich after serving his previous wife with divorce papers while she lay in a hospital bed having some cancers. And for doing dirty sex things with Callista while being married to said previous wife even though he had led the impeachment of Bill Clinton for doing dirty sex things with a woman who was not Hillary Clinton, all at the same time!

Wait, impeachment? Perhaps we should take a moment to remember what THAT was about!

In 1977, Bill and Hillary Clinton did a land deal called "Whitewater" with their friends Jim and Susan McDougal. All four of them lost money on the project, and Jim McDougal tried to get some shady financing and failed, and eventually his S&L went belly-up.

Seventeen years later, in 1994, after Bill Clinton was already president of the US and A, his Attorney General Janet Reno appointed a special prosecutor to examine whether Bill Clinton was a big ol' crook who had pressured a bank to make a loan to McDougal. That special prosecutor, Robert Fiske, was replaced a few months later by Ken Starr, because having a special prosecutor appointed by Clinton's AG was "a conflict of interest." In 1995, Bill Clinton got his knob polished by a young lady named Monica Lewinsky. Ken Starr never filed charges against Clinton regarding Whitewater, he said, because he wasn't sure the government's witnesses weren't a bunch of paid-off perjurers. But having found no evidence for charges in Whitewater, he DID file charges about the knob-polishing, in 1998.

At the same time, Starr exonerated the Clintons of "Travelgate," which was when Hillary Clinton fired a White House travel agent who was embezzling, leading to FIVE INVESTIGATIONS over FIVE YEARS. Oh, but he waited until after the midterms to do so.

Who was Speaker of the House during those 1998 midterms? It was Newt Gingrich! So we guess he was famous for that too. Who merrily led the impeachment of Bill Clinton for extramarital dick-suckings, the investigation of which commenced in an investigation of a failed land deal 17 years prior? It was Newtie! Who is now complaining that it is NOT NICE to broaden an investigation from one thing (possible collusion with a foreign power in our sovereign election) into a WHOLLY RELATED thing (attempting, badly, to cover up possible collusion with a foreign power in our sovereign election), which is a wholly related thing that in our recent history has caused a president to have to quite famously resign? We think you know the answer! It is Newt!

Oh, wait, what is this breaking news?

"The president of the United States cannot obstruct justice."

You literally voted to impeach a president for obstruction of justice in 1998, you fucking moron. @newtgingrich https://t.co/90PY4c3JWx

Fuck this guy, that's all I got.

Wonkette is ad-free, supported solely by readers like you. If you liked this trip down FUCK YOU NEWT GINGRICH LANE, please consider giving us all of the money.