HHS Nominee Tom Price Will Fit Great In Trump Cabinet, Because Of How He Is Grafty 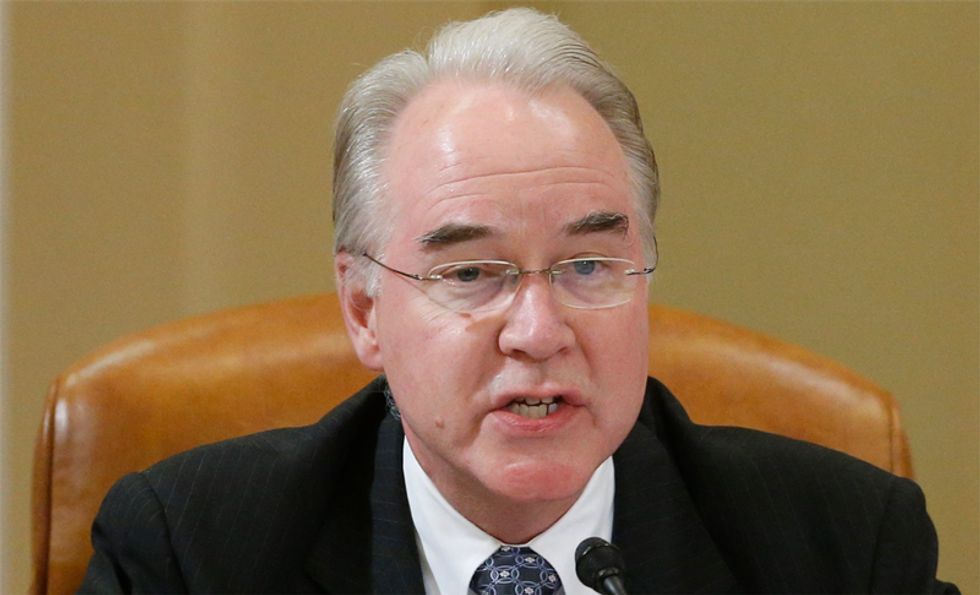 Still has a shot at Secretary of Foreheads

Georgia Rep. Tom Price, Donald Trump's pick to run the Department of Health and Human Services, is about as ethically conflicted as anyone who's won Trump's love, and is posing for his closeup before the Senate Health, Education, Labor and Pensions Committee today. Yes, that's even though news just broke that he'd purchased shares in a medical device company right before introducing legislation which ended up making the stock a lot more valuable. It's nice work if you can get it! The Trump transition team is quite certain it's no big, since the shares were purchased by a broker, not by Price himself, so maybe he didn't know he was going to enrich himself, and what do you plebs have against hard-working people making money anyway are you communists you probably are!

The deets on the deed, from CNN:

Price bought between $1,001 to $15,000 worth of shares last March in Zimmer Biomet, according to House records reviewed by CNN.

Less than a week after the transaction, the Georgia Republican congressman introduced the HIP Act, legislation that would have delayed until 2018 a Centers for Medicare and Medicaid Services (CMS) regulation that industry analysts warned would significantly hurt Zimmer Biomet financially once fully implemented.

OK, but that's really not so shocking, is it? The regulation would have made all medical doohickeys less profitable, probably, not just the ones made by the company Zimmer owned stock in, and we also know that all regulations are bad, so therefore delaying one that would personally make him money is merely a happy side effect of his strong principles. Clearly, any fool can see that.

Nonetheless, three Democratic senators seem to think maybe it would be a good idea to slow things down a bit and delay Price's confirmation until his ethics issues have been investigated. Al Franken, Elizabeth Warren, and Tammy Baldwin (who would look great on a poster together, we are just saying) are asking for a postponement of Price's hearings because of other medical investments he's made, to the tune of some $300,000 in stocks that could have been influenced by legislation Price sponsored and supported. Price has also reportedly helped campaign donors get approval for drugs and medical devices, which may sound bad, but is really just very aggressive constituent service. You might almost get the impression that Price saw his legislative job as a way of lining his pockets, which is just silly, because who ever heard of a public servant doing such a thing? Besides, the Trump transition team says everything Price did was within the law, and if you can't trust Team Trump, then who can you expect to ruin your life once they're in power?

And then there's Price's dedication to gutting the ACA, privatizing Medicare, and letting medical providers get at seniors' life savings through deceptive billing practices, but there's no suggestion he'd get rich off those -- screwing patients is more a matter of principle for him in those areas.

In any case, the Health, Education, Labor and Pensions Committee doesn't even get a vote on Price's nomination -- they're holding the hearings, sure, but the vote on whether to advance his nomination to the full Senate will be held by the Senate Finance Committee, which hasn't even set a hearing date yet. Price will probably get all his conflicts of interest taken care of by then, and if not, it should be easy enough to simply reframe them as not actually a problem, because as everyone knows, ethics are for little people.