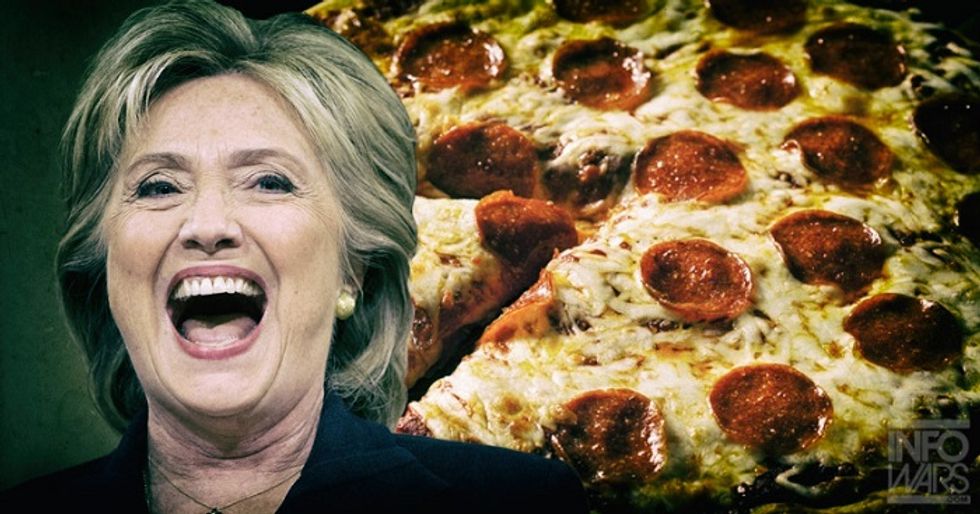 You want classy graphics, you go straight to Alex Jones.

OMG she admits it! Hillary Clinton acknowledged that she had supported Washington DC's Comet Ping Pong pizzeria after an Alex Jones fan shot up the place last December in an effort to rescue all the kidnapped children who weren't imprisoned there. The news broke at an event Monday to promote Clinton's new book, What Happened (buy through that link and Wonkette gets like a penny!) at the independent DC bookstore Politics and Prose, just down the street from Comet Ping Pong. Politics and Prose was one of several in the neighborhood that got listed on weirdass conspiracy websites by people who were absolutely certain the nonexistent basement of Comet Ping Pong was connected by tunnels to other businesses, because what good is a conspiracy theory if there aren't tunnels, too?

Politics and Prose co-owner Lissa Muscatine spilled the news that will no doubt get the crazies all het up again, telling the audience for the reading and signing that

Clinton and her husband, former President Bill Clinton, had purchased a number of pizzas from Comet Ping Pong and sent them to a local after-school literacy program.

“I told you what was going on and you responded instantly and were so supportive,” recalled Muscatine, whose bookstore is located just down the street from the pizza place. “A few days after that, you and your husband said, ‘What can we do to support Comet?’”

See? they really are all in it together! And they openly brag about being supportive of the Reality Plot:

“This is a terrible example of what can be done by people who are malicious, unacquainted with the truth and pursuing their own agendas,” Clinton said of the shooting.

“I can’t tell you how important it was ... that you and President Clinton were there for us,” Muscatine told Clinton. “I’ve never had a chance to thank you publicly.”

Applause from the crowd no doubt drowned out the anguished cries for help from hundreds of children who had been transformed, via Spirit Cooking Witchcraft, into books on the shelves of Politics and Prose.

And even though you might think #pizzagate was all over -- that's what THEY want you to think -- we also learned yesterday that some of the disproved, evidence-free conspiracy tale's promoters are still very active in politics, and have even scored a big celebrity hire. Sebastian Gorka, the former "senior adviser" to Donald Trump who was forced out of his job -- whatever it was -- last month, has found a new job at a pro-Trump super PAC run by some enthusiastic promoters of the unhinged theory and the unhinged president, according to The Daily Beast. Gorka's never talked about pizzagate himself, but he has plenty of other fringe beliefs, so he ought to fit right in. In addition to pizzagate, the organizers have also pushed the evidence-free notion that Seth Rich, a DNC data guy who was murdered last year, had to have been the REAL source of the DNC and John Podesta emails published by Wikileaks:

In joining the group, dubbed the MAGA Coalition, Gorka has dramatically elevated its profile. But that hasn’t led its members to stop dabbling in urban myths and legends. Reached for comment on Tuesday, a spokeswoman for the MAGA Coalition defended its leaders’ efforts to “raise questions” about both human trafficking rings run out of D.C. pizza shops and a murder they deemed mysterious even as police insist it was the result of a botched robbery.

No telling why Gorka joined up with this particular bunch of idiots when he could probably have gotten a job at Fox News; maybe he was attracted by their mission statement, which says they're out to promote the Trump agenda and to "compete against globalist corporatist interests" (the Jews).

Daily Beast details the deep goofy history of the people who started and run the MAGA coalition, and notes that they're getting help from a wide range of fellow second-rank rightwing media figures, who have also pushed the Rich and Pizzagate conspiracy stories. We'll just close here with this jaw-dropping bit about the MAGA coalition's "media coordinator," who sure knows a thing or two about communications strategy:

Reached for comment on Tuesday, Tricia Cunningham, a media coordinator for the MAGA Coalition, greeted a Daily Beast reporter by saying she was doing “Trumptastic, as always!” She then attempted to steer an interview back to the group’s mission of supporting President Trump and like-minded elected officials at the state and federal levels [...]

“As far as Pizzagate, I’ve traveled from Pennsylvania to Washington D.C., and human trafficking is a huge deal,” she said. “So there’s a lot of questions that need to be raised.”

Yr Wonkette is supported by reader donations. If you'd click right here to give us money, that'd be just wonktastic (*shudder*).