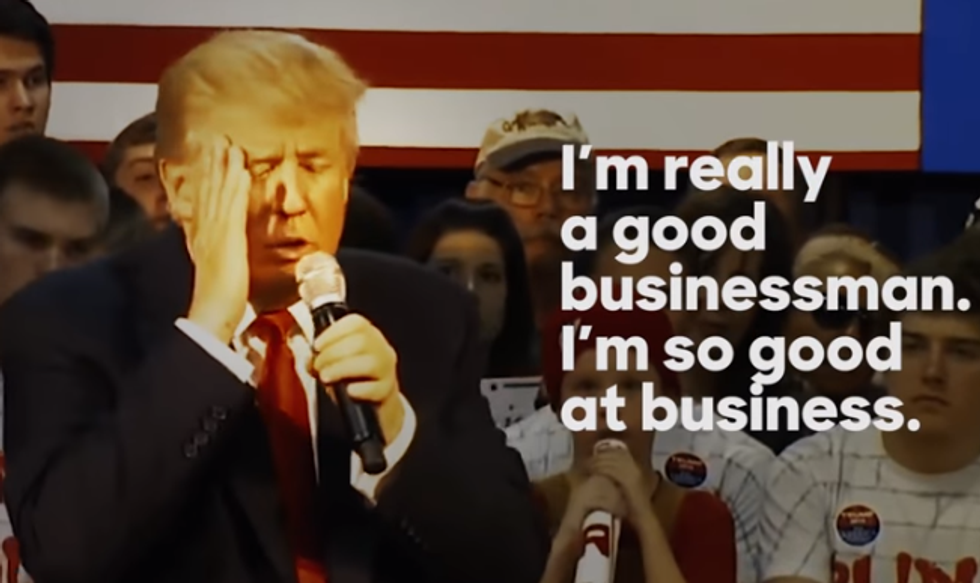 Oh dear, Hillary Clinton's ad game continues to be STELLAR. On Friday, we showed you a whole dump truck full of ads Hillary dropped on Donald Trump's orange face, and it seemed every one was better than the last! Guess that's what happens when your campaign HAS DOLLARS, LOL WOCKA WOCKA! (We say that because Donald Trump's campaign ain't got no dollars, awwwwww.)

[wonkbar]<a href="http://wonkette.com/603141/these-new-hillary-ads-will-warm-the-cockles-of-your-trump-hatin-heart"></a>[/wonkbar]And oh Democratic Lord Jesus In Heaven, what a day for this new Hillary ad to drop! Just as we're finding out about how Trump's campaign war chest is sailing up Shit Creek without a paddle, we get Hillary just cold insulting Trump for being bad at business. How lovely!

All of the things in this ad are true! Trump is bad at business and he bankrupts the fuck out of his companies, and then makes all the buck$ off of it. Basically, sucking ass is his business plan, because it's the only thing he knows probably. Maybe we're weird, but we prefer billionaires who don't fail-fuck their companies into nonexistence all the time.

And oh, the myriad companies he has allowed to fail! (Or caused to fail.) Our favorite part of the ad is when Hillz shows Marco Rubio, Mitt Romney, Elizabeth Warren and even freakin' John Oliver, listing out all the companies Trump has run into the ground:

[wonkbar]<a href="http://wonkette.com/602656/youll-need-a-cigarette-after-watching-elizabeth-warrens-latest-donald-trump-nad-stompin"></a>[/wonkbar]You recall that Elizabeth Warren speech pictured above? It was two weeks ago, you dumb goldfish, you better remember! In it, she delivered the laundry list of Trump failures, which we will reprint for you now, out of love:

The end point of Hillary's ad is that this is his strategy, and this is what he's going to do to America. Because again, it's the only strategy he knows. And sure, he might think he can use his book The Art Of The Deal as his own personal CliffsNotes for governing, but bless his heart, that is not how the big boy work of running America works.

So hold on to your Trump Steaks and your Trump Hats, dears, because this campaign is only gonna get hilarious-er from here. You know how thin-skinned he is! DONALD TRUMP IS GONNA ESSPLODE IN GRRRR ANGER!

And we get to watch!