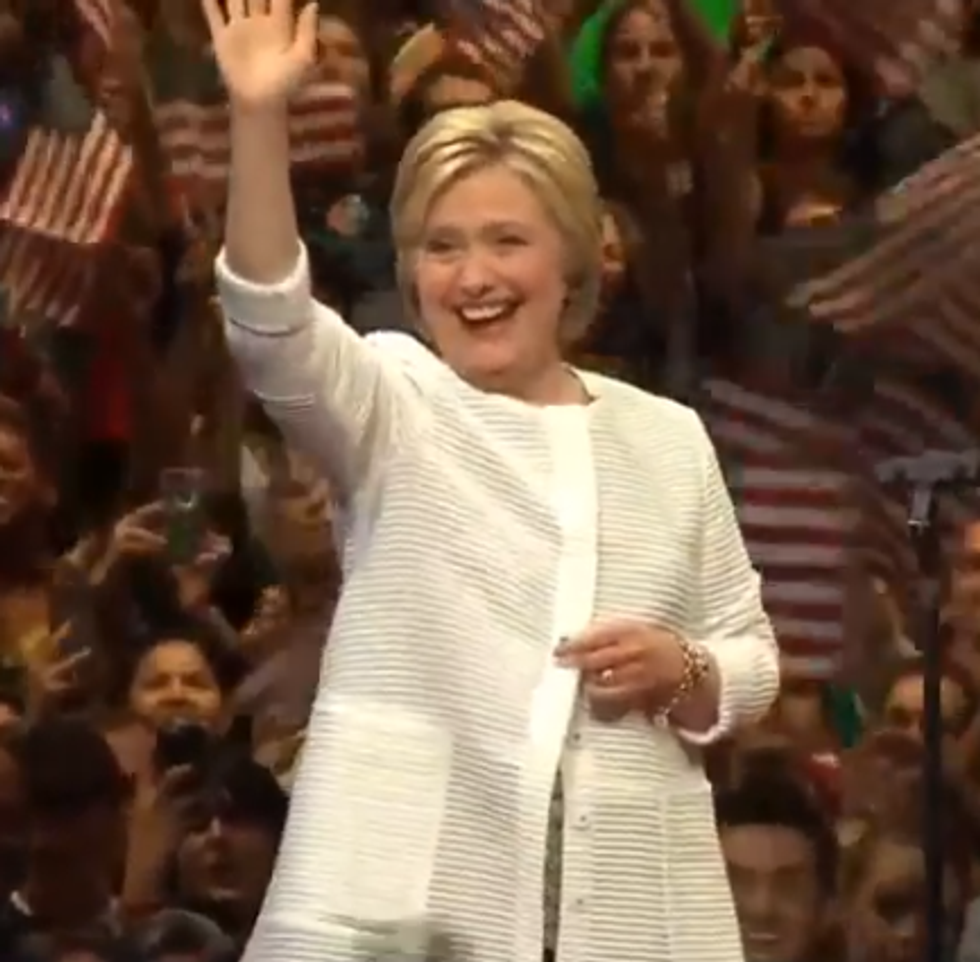 The Associated Press called California for Hillary Clinton early Wednesday morning, cementing a whompin' that outperformed all the polling averages. Right now, with a little over 94% reporting, she holds a 56-43 lead in the state. Add this to victories in New Mexico, South Dakota, and New Jersey, and it's clear that, unless Bernie Sanders is somehow able to net approximately eleventy thousand million delegates in the Washington DC Primary next week (which don't exist), Hillary has far and away made history, as the first female presumptive nominee for a major party. (No, Jill Stein does not count.)

Here are the numbers, as they stand, as per the AP, which is obviously #RIGGED:

[wonkbar]<a href="http://wonkette.com/602707/liveblogging-some-lady-named-hillary-making-speech-about-how-she-won-or-something"></a>[/wonkbar]Hillary's speech (watch it here) acknowledged the history of the moment, because obviously HOLY SHIT IT IS A BIG DEAL THAT A WOMAN IS DOING THIS, FINALLY. FINALLY! Of course there are already people out there acting like, by saying she is a woman and she is the first, she is playing the "woman card." Fuck them right in the ass. One of the most disgusting things men and white people and straight people -- hell, any powerful, privileged group -- can do is act like it's somehow unserious to acknowledge that history has, in fact, been made.

Hillary was gracious and congratulatory toward Bernie Sanders and his supporters, saying that "Senator Sanders, his campaign, and the vigorous debate we've had ... have been very good for the Democratic Party AND for America!" That is indisputably true!

The same can't be said, unfortunately, for Bernie Sanders's speech, and that makes us sad. The one time he mentioned Hillary, he said he had congratulated her:

Tonight, I had a very kind call from President Obama, and I look forward to working with him to make sure we move this country forward, and tonight, I had a very gracious call with Secretary Clinton, and I congratulated her on her victories tonight.

And the crowd went wild! (With boos.)

Sanders didn't expand on what Hillary's "victories" were. Reminder: Hillary achieved a solid majority of pledged delegates, she has won the Democratic nomination, and LADY LADY LADY WOMAN CARD HISTORY MADE OMG. That was a missed opportunity.

Sanders instead pledged to fight on all the way to the convention in Philadelphia, perhaps allowing his die-hard supporters to live a little longer with the myth that the contest had actually been rigged, and that there was still a chance:

I am pretty good in arithmetic, and I know that the fight in front of us is a very, very steep fight, but we will continue to fight for every vote, and every delegate ...

It's not a "steep fight" anymore, and there's no "arithmetic" to be figured. It's over. Millions of lovely Sanders supporters know this. Many of them, in our own Wonkette comments section (which is not allowed), were pissed at their candidate for failing to acknowledge the history of the night and start working toward bringing the Democratic team back together.

In a speech of striking stubbornness, he ignored the history-making achievement of his Democratic rival, Hillary Clinton, who became the first woman in American history to clinch the presidential nomination of a major political party.

Mr. Sanders waited until 15 minutes into his speech to utter Mrs. Clinton’s name. [...]

This would be the time, under normal circumstances, for a primary rival to acknowledge insurmountable odds, salute a prevailing opponent and begin the work of stitching together a divided political party.

That was the conciliatory message that a vanquished Mrs. Clinton delivered eight years ago to the day, on June 7, 2008, when she ended her battle against Barack Obama for the Democratic nomination — a contest that was mathematically closer than the one with Mr. Sanders now.

“We all know this has been a tough fight,” Mrs. Clinton said at the time. “But the Democratic Party is a family. And now, it’s time to restore the ties that bind us together.”

Maybe Bernie just wants to get through his meeting with President Obama on Thursday, to ensure that his monumental campaign -- and yes, Hillz dorks, it was monumental -- was not in vain, that if he rallies his people into the fold, the ideals he fights for won't be forgotten. That's valid.

Maybe Bernie was thrown by the Politico article that dropped a little over an hour before he took the stage, wherein his own aides threw him directly under the bus -- and then backed over him approximately 17 times -- for the campaign's failures.

Wonkette was officially neutral through most of the Democratic Primary, but it goes without saying that we're not neutral in the general election. BREAKING NEWS, it is the general election now. To all Sanders supporters, and to all Clinton supporters, and to all Martin O'Malley's mom, we say this: We are all one big, happy, GRRRR ARGH ANGRY family, and it's time to devote our big, happy GRRRR ARGH ANGRY energy toward beating the unrepentant fuck out of Donald Trump.

Can we do that? Si se puede?

OK good. We are glad we had this little talk.