Hillary Clinton Invited To Real Live Gay Wedding, Will There Be Pizza? 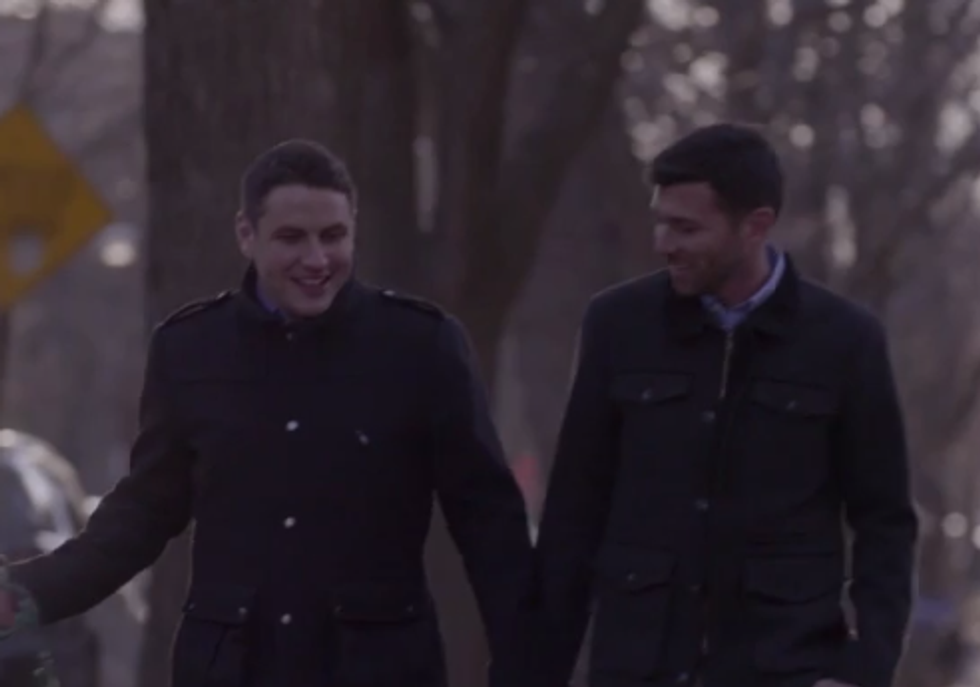 Hillary Clinton announced Sunday that yeah, sure, she guesses she'll go ahead and be president in 2016, not that it's that important to her or anything. As we reported, her announcement video is terrible and un-American, as it features "regular people" doing "regular things," like going back to work, graduating college and things like that. But her True Agenda is revealed when a man's voice says, "I'm getting married this summer to someone I really care about." The camera moves to footage of a man holding hands WITH ANOTHER MAN, which yr Wonkette has to admit is really kind of big and heartwarming and wonderful, since it's the first time a presidential candidate with a shot of winning has started out the gate declaring support for the gay marriages.

That couple, Jared Milrad and Nathan Johnson, had no idea they were going to be gay homosexual props in Clinton's big announcement, but they are super excited nonetheless, and now they say they are inviting her to their wedding!

“When we were first contacted, they basically told us a little bit about what they would be doing and said they were interviewing people going through big changes in life and also said that it was something affiliated with Hillary, but didn’t exactly say what it would be,” Johnson, who is 30 and a project manager for a health care consulting company, told the Washington Blade. “So they just mainly wanted to hear our story about that and our life and decision to get married and how we’re dealing with that and how excited we are about that.” [...]

And yes, they are inviting Clinton to their wedding. "We're mailing the invitations soon, Hillary Clinton!," Milrad writes on Facebook. "We are going to extend an option of a plus-one for Hillary Clinton. She'll probably want to bring someone," Johnson adds.

Yeah, duh, she's going to want to bring somebody named BENGHAZI to the wedding, which will be held July 19, in Chicago. Hillary Clinton had better clear her schedule!

Of course, the most important question on everyone's minds, probably Clinton's too, is whether or not there will be pizza served at the wedding. We learned recently, during the Indiana religious freedom thing that everybody was so wee-weed up over, that pizza is the most important food group at a gay wedding, since the owners of Memories Pizza had to so bravely assert they would NOT be catering any gay weddings. All those Indiana gays are just going to have to get their nuptials catered by Papa John's or something, while Memories Pizza will be all the way across town, swimming in their $840,000 in GoFundMe moneys with Jesus.

But that's Indiana, not Illinois. We bet Jared and Nate will be able to find a yummy deep dish caterer for their gay wedding, which Hillary Clinton totally should go to, if just for the cynical photo-ops, because duh.