Hillary Clinton To Benghazi Committee: You Have Made A Huge Mistake 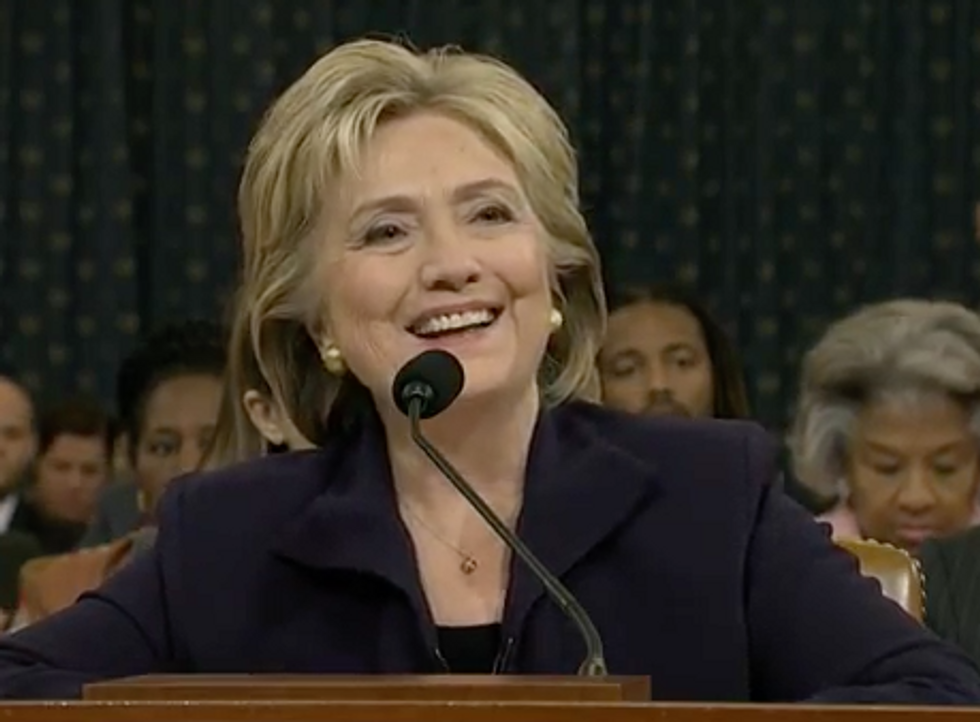 Whee! The Benghazi Hearing has only just begun, and already, Republican committee Chairman Trey Gowdy looks like a whiny partisan a-hole -- you know, more -- and Hillary Clinton looks like, well, like a former secretary of state and future president.

Gowdy opened the hearing with a long statement about how yes, technically there have been a whole bunch of investigations into Benghazi already, but the problem is, none of them have proven that Hillary Clinton did anything wrong. GRRR. So here we are again, to ask more questions and make more allegations, (and spend more millions of the taxpayers' dollars) until Republicans figure out some way to trip up Hillz and trick her into say, "Yeah, you caught me." (Spoiler: Not gonna happen.)

And here is how Madam Senator First Secretary President-Elect (Almost) Hillary Clinton -- after reminding the committee of all the terrorist attacks on embassies that happened under St. Ronald Zombie Reagan, and none of those attacks required four years of congressional investigations, AHEM -- looked like a grown-up U.S. American and made the Republicans look like teeny tiny-dicked cry-baby toddlers with diapers that need to be changed, like, yesterday:

Our nation has a long history of bipartisan cooperation on foreign policy and national security. Not that we always agree; far from it. But we do come together when it counts. As secretary of state, I worked with the Republican chairman of the Senate Foreign Relations committee to pass a landmark nuclear arms control treaty with Russia. I worked with the Republican leader, Mitch McConnell, to open up Burma, now Myanmar, to democratic change. I know it''s possible to find common ground, because I have done it.

We should debate on the basis of fact, not fear. We should resist denigrating the patriotism or loyalty of those with whom we disagree.

So I'm here. Despite all the previous investigations and all the talk about partisan agendas, I'm here to honor those we lost, and to do what I can to aid those who serve us still.

My challenge to you, members of this committee, is the same challenge I put to myself: Let's be worthy of the trust the American people have bestowed upon us. They expect us to lead, to learn the right lessons, to rise above partisanship, and to reach for statesmanship. That's what I tried to do every day as secretary of state, and it's what I hope we'll all strive for here today, and into the future.

The whole point of the investigation, and of forcing Clinton to testify yet again, was to make her look real bad. The thing is, Hillary Clinton may have murdered Vince Foster in Benghazi with her secret lesbosexual lover Huma, but she is still a lot smarter and more prepared (after decades of experience) to deal with Republican witch-hunt bullshit.

In fact, here's a sneak preview of Trey Gowdy later this evening.

So yeah, game on.

Looks like it's gonna be a loooooong day. For Republicans. Watch with us, but NO DRINKING GAMES, or you'll be barfing for days.