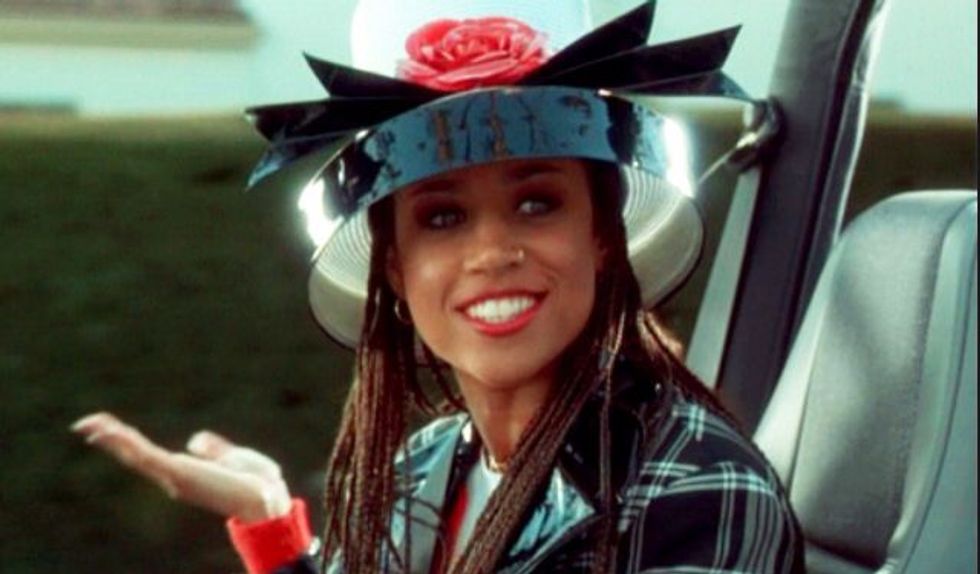 Fox contributor Stacey Dash, who we are required by LAW to mention was Dionne in Clueless, is making the interview rounds to promote her new book, There Goes My Social Life: From Clueless to Conservative. Which, as you know, is a quote from that movie about balls flying at someone's head. Here, though, it probably refers to how none of the cool Hollywood types will let her sit at their lunch table because she is a conservative, even though she was in a hit movie 20 years ago! Which is a thing she is always complaining about.

It was ghostwritten, by the way, by Nancy French, wife of David French. The dude Bill Kristol says is gonna be the next President of the United States! FULL CIRCLE!

Anyway, in a chat with ET Online meant to promote her book, Dash shared some of her most specialest thoughts!

For one thing, she is appalled by Lady Gaga's anti-bullying campaign and its liberal agenda. Which is probably true! Because Lady Gaga would prefer it if gay kids didn't have to be bullied in school, and many on the Right feel that not being allowed to bully gay kids infringes on their First Amendment rights.

This, of course, is why most anti-bullying campaigns are going to have a "liberal agenda." What would an anti-bullying campaign with a conservative agenda even consist of? Like, a bunch of white men sitting in front of a stark white background talking about how silenced they feel when people point out that they seem to have an inordinate amount of power in this country, or how it violates their First Amendment rights when someone blocks them on Twitter after they helpfully offered some "hard truths" about gender and race that were definitely not just their own gross and terrible opinions on things?

But I digress! Yeah, she's totally mad at Lady Gaga, and Lady Gaga is probably just all like "Oh, the chick from Clueless? I thought she died! OH, the other one. Uh, Ok?"

She is also mad at Caitlyn Jenner and other trans people who think it's somehow OK for them to just go to the bathroom like normal people. Because they have just started to "infringe upon [her] rights too much."

But she does have a solution for how they could not do that:

"OK, then go in the bushes. I don't know what to tell you, but I'm not gonna put my child's life at risk because you want to change a law... So that you can be comfortable with your beliefs -- which means I have to change my beliefs and my rights? No."

TECHNICALLY! Laws banning trans people from using restrooms have only started to pop up this year, so it is hardly as though they are a great American institution. Dash has probably peed next to so many trans people before, it would make her head spin! But still, she would just really prefer that they go in the bushes. You know, because it is far less likely that HER CHILD will see their genitalia there than in the stall of a woman's room. Unless they happen to be standing somewhere near that particular bush.

Fun fact! We do actually have a grand history of laws prohibiting public urination!

Does it get more ridiculous? You bet it does. Or at least the same amount of ridiculous. Stacey Dash really thinks things would be better if they were like they were in Mad Men.

Yes. Stacey Dash watched the show Mad Men and her takeaway was "Wow! What a great time to be alive! Clearly this worked out very well for everyone. These rigid gender roles sure lead to a very healthy society in which no one appeared to be miserable or losing their goddamned mind!"

Not to mention, just a simply FABULOUS time for black people. Could not have been better. Make America Great Again! Donald Trump 2016!

Also, Dash, says that she is a cool, 21st century kind of feminist,

Many of those things are true! Technically! Sure! You absolutely can be a stay-at-home mother and be a feminist! And you can show your legs! Pretty sure those things haven't been super big feminist issues since the 1980s, maybe. We've got way more things to worry about at the moment, frankly. However, what, pray tell, does it mean to "try and get a man's job"? Are we stealing jobs directly from them, that were deservedly theirs for some reason? Is there some kind of phenomenon happening where bosses and CEOs take a look at some poor male employee and go "Fire him right away! I want THAT GIRL!"

Because I can pay her less!

Or are we trying to have jobs that only men are supposed to have? Is this another transphobic thing? Is she upset about transition surgery? Is having a dick a JOB now? Because otherwise, I just can't see how any job outside of maybe prostate modeling would be a "man's job."