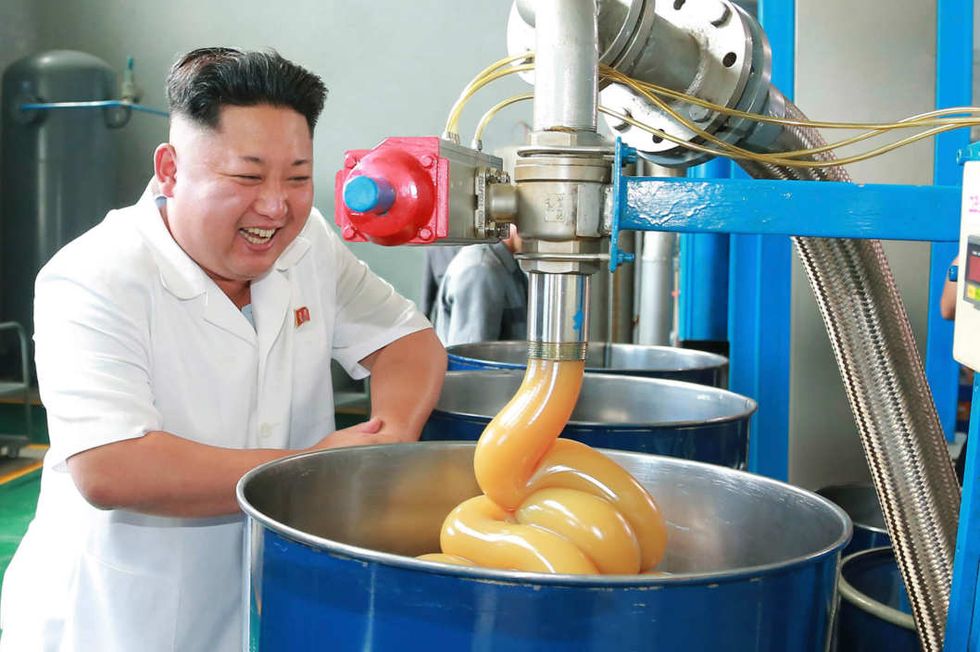 The power drunk, sadistic, and unstable Dictator for Life of North Korea, Kim Jong-Un -- who executed a dozen members of his own family to consolidate power, starves his own people while pumping them full of propaganda, and is armed with nuclear weapons -- surprisingly does not have a sense of tolerant equanimity about a film that roundly mocks him and assassinates him in effigy.

We know, we're just as shocked as you are. Hollywood, which apparently has Googling skills as weak as their password security, didn't realize this until he sent a squadron of amusingly named nerd goons to steal some old emails, has quickly changed tactics, abandoning their tactical retreat in favor of haphazard, preemptive, and unconditional surrender.

Having already allowed theaters to back out of showing the Rogen and Franco vehicle The Interview over threats from hacker group Guardians of Peace that screenings of the film would be met with violent retribution, Sony Pictures announced that the film has been permanently shelved and would not be released in any form. A few enterprising movie theaters had planned on replacing screenings of The Interview with 2004's Team America: World Police, a grossout-marionette-action-comedy (a real subgenre that exists, and we definitely did not make up six seconds ago) from the makers of South Park, which also pokes fun at North Korea. Paramount, which hasn't been threatened, hacked or even mentioned, ordered these theaters to cancel their screenings of the film.

Three movie theaters say Paramount Pictures has ordered them not to show Team America: World Police one day after Sony Pictures pulled The Interview from release. The famous Alamo Drafthouse in Texas, Capitol Theater in Cleveland, and Plaza Atlanta in Atlanta said they would screen the movie instead of The Interview but Paramount has ordered them not to do so. (No reason was apparently given and Paramount hasn't spoken.) Team America of course features Kim's father, Kim Jong-Il, as a singing marionette.

If that isn't pathetic enough, DEADLINE is reporting that Gore Verbinski and Steve Carrell psychological thriller has been cancelled for having the audacity to choose North Korea as its setting.

The chilling effect of the Sony Pictures hack and terrorist threats against The Interview are reverberating. New Regency has scrapped another project that was to be set in North Korea. The untitled thriller, set up in October, was being developed by director Gore Verbinski as a star vehicle for Foxcatcher star Steve Carell. The paranoid thriller written by Steve Conrad was going to start production in March. Insiders tell me that under the current circumstances, it just makes no sense to move forward. The location won’t be transplanted. Fox declined to distribute it, per a spokesman.

Let's be clear: we've not seen the film, but The Interview appears to be a tasteless and quite possibly racist film that uses the misery of the North Korean people as fodder for an extended joke and the assassination of their leader as that joke's punchline. If the film had been canned because of that, it'd be totally fine and even good. But the film's insensitivity didn't bother Sony when they greenlit and funded the film. They didn't have an attack of conscience when they filmed, finished, and previewed it, nor when they scheduled its release or poured money into a multiplatform marketing campaign. And maybe it would be a little much to ask low-paid theater employees to risk their lives over a movie currently hovering around 50 percent on Rotten Tomatoes. Nobody wants to die over The Interview. [contextly_sidebar id="URDtoMT56BlzTwPa5KUUktruMZqNDdmo"]

But to cancel movies because they're simply set in North Korea? To suppress screenings of a film that has been available for a decade because the terrorists won't like it? When the only proof that this organization is operationally capable of carrying out coordinated terrorist attacks on American soil is that they stole emails? For an industry that publicly congratulates itself on having the courage to fund and give awards to films that take such bold stances as "slavery was bad," "racism is also pretty bad," and "dying of AIDS is sad," this kind of mewling cowardice is, quite honestly, incredibly embarrassing. And for a country that makes so much of its legacy of freedom of speech and expression to, to use an oft-misused and derided expression, let the terrorists win, is shameful too.

We at Wonkette think it would be a shame to let an ambulatory bad haircut who regularly attempts to fellate missiles and masturbates into nuclear launch tubes stop America for releasing its crappy movie. That's why we're offering to show The Interview at the Secret Wonkette HQ on Christmas Day, the day the film was originally scheduled to be released, although we can't promise that we'll all sit there with the audience and watch the thing. But we WILL pass a hat around at the screening to raise money for an as yet unnamed charity, and at least some of us will liveblog it. If any of our bold readers want to pass along our information to the powers that be at Sony Pictures, we'd be much obliged and eternally indebted. Let's do it for us. Let's do it for freedom. Let's do it for America.