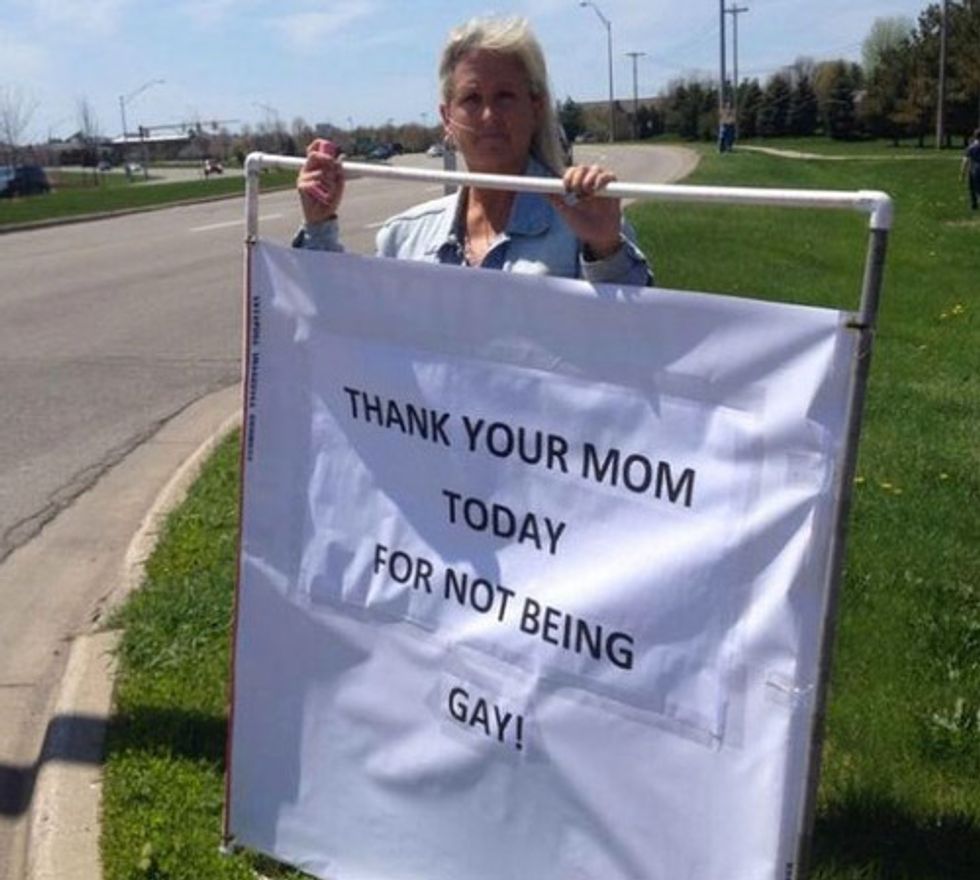 Guys, do you remember Christine Weick? Of course you remember Christine Weick. Christine Weick is the nice and not at all bugshit crazy American Patriot who drives around in her SUV from town to town -- she is NOT HOMELESS, SHUT UP, SHE HAS A BANK ACCOUNT AND EVERYTHING -- rambling on about Muslims and homosexuals and how Monster Energy Drinks are of the devil. And here’s the good news: She’s coming to save you, Oklahoma, from the scourge of the Islamics doing prayers to their false god and stuff.

First, some context: When Yr Wonkette last caught up with Mrs. Weick in January, when she interrupted Texas Muslim Capital Day by grabbing the mic and shouting words about how “Muhammad is dead” and blah blah. This came a few months after Mrs. Weick interrupted a Muslim service at the National Cathedral by shouting words about how Muslims shouldn’t be allowed in God’s House and why are they turning their backs to the cross to pray toward Mecca, those heathens?

This is kind of her thing.

And so it was that the Traveling Christine Weick Jesus Hates the Mooslims Circus found its way to Oklahoma, which is basically Sodom and/or Gomorrah, to save the Sooner State from Creeping Sharia on the occasion of the first-ever Muslim Day at the state capitol, hooray!

Muslims visited the Oklahoma State Capitol Friday with government leaders, and were met with dozens of Anti-Islamic protesters. The day began like it was planned for the more than 100 Muslims. But around 2 o’clock, as dozens of them knelt down to pray, a Christian protester shouted out the Lord’s prayer, seemingly trying to drown out the Muslim worshipers. […]

“…lead us not into temptation, but deliver us from evil. For thine is the Kingdom, the power, and the glory. For ever and ever. Amen. That is our message,” Christine Weick said.

That message was cut short. Troopers escorted her out, saying the group of protesters did not have a permit to be inside the capitol.

Weick, Good Christian Soldier that she is, was Very Concerned about her free speech rights being trampled.

“I’m a little bit upset about this because this is something that we were told is open to the public, and we are a part of the public,” Weick said.

The part that belongs in a straitjacket.

Anyway, you will be happy to know that Mrs. Weick didn’t say the most insane thing that day. No, that honor belongs to an anonymous protester who told a local news crew, “They’re trying to pretend to be good until it’s time to be evil. They’re just infiltrating the system.”

Where will the Traveling Christine Weick Jesus Hates the Mooslims Circus land next? If we’re lucky, a padded room. But we are not that lucky, so probably Florida. Just a guess.