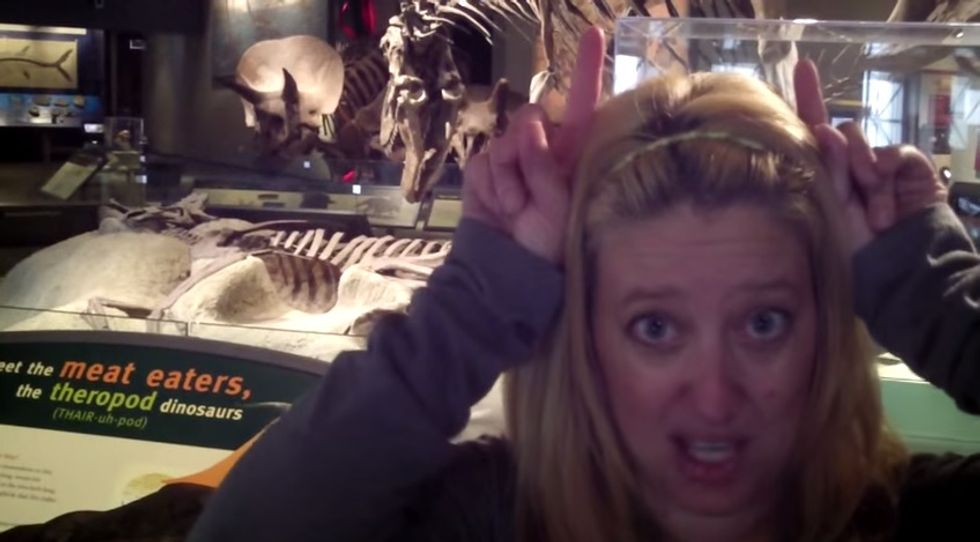 Meet Megan Fox, who is not the dopey actress from the Transformers movies, but is instead a dopey homeschooling mom who doesn't believe that  organisms transform over time. She has her very own YouTube channel where she reviews children's books and pursues a single-minded crusade against corruption on the public library board of Orland Park, Illinois.

Ms. Fox recently took a visit to the Field Museum's "Evolving Earth" exhibit -- it's actually "The Evolving Planet," but whatevs, that's the smallest error she's made -- to "audit it for bias." Guess what? Steven Colbert was right! That science museum was just FULL of liberal bias and reality -- if you believe the lies of science, that is. Her amazing video has kind of blown up on Reddit and could well be the greatest internet hit of Thanksgiving Week 2014.

Within the first two minutes, Fox has already completely bollixed a Charles Darwin quote that most creationists simply love:

Darwin once said, "If the single cell is more complex than I think it is, then all of my theories... are... I'm gonna have to start all over again."

We totally remember how he said that, only it wasn't about cells at all. The way Darwin said it in our universe, in On the Origin of Species, went a lot more like this:

"If it could be demonstrated that any complex organ existed which could not possibly have been formed by numerous, successive, slight modifications, my theory would absolutely break down."

Cells are organs, aren't they? That Darwin quote -- the real one -- is, in fact, where the whole "intelligent design" mania for "irreducible complexity" comes from, the search for some biological structure or process that's just so incredibly complex that it couldn't possibly have evolved (like David Sedaris's fictional proboscis monkey Socrates, they usually go for the eyes). For heaven's sake, Ms. Fox, you're not just bad at science, you're actually bad at pseudoscience! Indeed, the entire video is a tribute to critical thinking gone haywire, as Ms. Fox lives out the Dunning-Kruger effect for us.

Fox explains that since everything we've learned about cells since Darwin's day is just so incredibly more complex than what he knew, surely he would be forced to admit that he was completely wrong (at least in that timeline where he was an idiot who predicted we'd never learn more about cells after 1859):

Between now and then, what we've discovered is that the single cell, if the single cell then were, you know, a Buick, the single cell now is a galaxy, so Darwin himself would have said, "OK, back to the drawing board, none of this makes any sense." But yet we're still stuck with hundred-year-old science. It's disgusting. No one cares. Does no one care? Does no one want to know the truth? 'Cause I want to know the truth, and this (points to text on an exhibit about eukaryotes, which someone just totally made up because she can't pronounce it) makes no sense.

Now that is just dumb, because General Motors makes Buicks, and Ford made Galaxies, but they've been out of production since 1974 anyway, and even Fords are way more complex today than they were back then. They didn't even have CD players! And why are we still using dusty, hundred-year-old science when all the real facts you need are in the Bible, which is not a hundred years old? The whole thing is just so horrible that Fox stalks away from the display, literally almost in tears. "It makes me so angry! I get...angry!"

And we still have 27 and a half minutes to go. We have a confession: we honestly tried to only hit some high lowlights for you, but damned if we didn't just end up transcribing most of the best observations in the video. It was totally worth the lost sleep.

Then it's out through the gift shop, where you can buy dinosaur plushies. How do they even make those? What are they made of? Unicorns? Probably. You don't know. You didn't see it happen. Don't pretend like you know. Suddenly, the video is over, and we are sad, and we realize that we have just seen the most brilliant video of the week, maybe of all time. Megan Fox, do you have a newsletter?

Update: Via a note from Twitter, a bit more on Megan Fox: Turns out she's also a featured blogger at rightwing loonhub PJ Media. What a surprise!