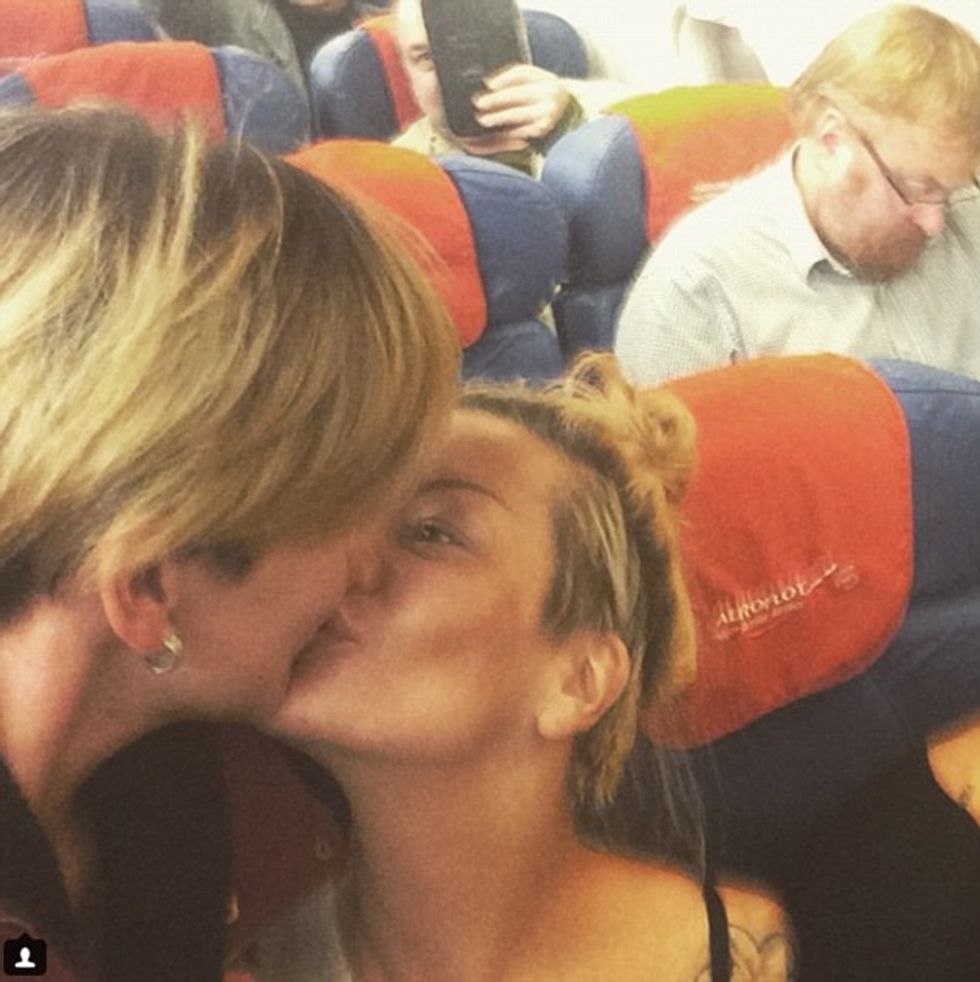 Vitaly Milonov is a member of regional Parliament in St Petersburg -- the Russian one, not the Florida one -- and he does not like The Gays, not one little bit. Before the national government introduced its terrible law barring "gay propaganda," Milonov had introduced a similar measure in his regional legislative body. So he's a well-known face in the Russian anti-gay movement; we kind of hope maybe he has his own Santorum-like term on Russian Google.

And now he is really, really ticked at the gays for what they have done to him: Namely, making him look like more a bigoted idiot, which he really needs no assistance with. You see, Milonov got all famouser on social media this week when two lesbian ladies took the above photo of themselves snogging on an airliner, with Milonov sitting cluelessly in the row behind them.

After a St. Petersburg nightclub owner who goes by the name of "Kseniya Infinity" -- the nightclub is also named "Infinity" -- posted the pic of herself and a friend kissing, it quickly went viral, and a furious Milonov is reacting exactly like the sort of homophobic jerkwad you'd expect.

“The lesbians went through with this photo session due to their stupidity,” Milonov told Agence France-Presse. “It shows that all LGBT people are mentally ill. They have overdosed on so-called European values.”

Milonov vowed to retaliate, saying: “They should have to do a photo session in a police station.”

Obviously, Milonov isn't overreacting just because the photo has been mildly embarrassing to him. He's just protecting Russian children from the Gay Propaganda that the photo represents. Heavens, impressionable young Russian minds might even be polluted by the European idea that lesbians kissing in front of a moral scold is funny or something.

Milonov is also vowing to "investigate" Kseniya's nightclub, probably for the sake of the children as well.

“I didn’t know anything about the club they organised. Now I will get to work on it,” Milonov said.

Presumably, the investigation will focus on whether Infinity promotes The Ghey, though as a fallback, Milonov may order the club closed for being in violation of truth in labeling laws if it is determined to occupy a finite space.

For her part, Kseniya has said on a Russian social media site that the photo was a spontaneous idea after she and her friend saw Milonov sitting behind them on a flight from Moscow to St. Petersburg:

“Milonov himself didn’t say anything to us. We did a photo-session with him in the background. When he spotted us, he hid behind a tablet,” Kseniya wrote.

“We’re very happy. He probably isn’t, but who cares.”

It's refreshing to see that even with a powerful bully threatening her, the number of fucks Kseniya doesn't give is near infinite.