Horrible Bad Factory Farmers Can't Put You In Jail For Exposing Them No More! 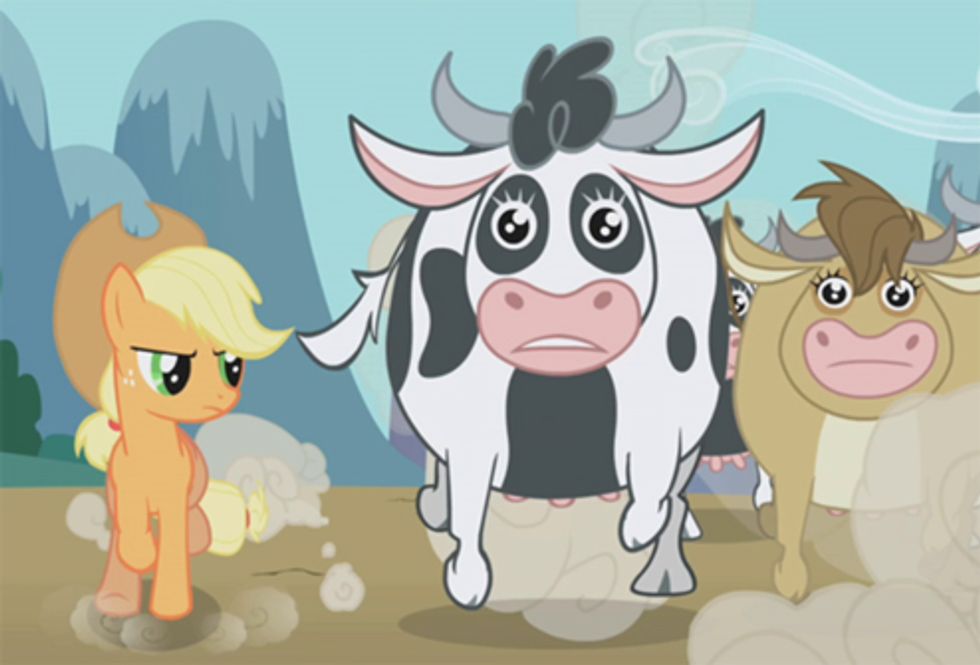 For all of the whining about Free Speech being destroyed by TV networks that fire bigots or by mean blog moderators who don't let jerk-babies ruin their comments sections, sometimes governments pass terrible laws that are actual violations of the real First Amendment. So wave your ACLU Pocket Constitution in the air, folks -- we're happy to report that Idaho's incredibly dumb "Ag Gag" law was found unconstitutional by a federal court Monday.

The law, passed in 2014, prohibited people from applying for jobs at farms for the purpose of doing undercover filming of agricultural operations, especially abuse of animals, after some animal-rights troublemakers documented workers at a major Idaho dairy farm doing terrible things to cows, as we reported last year:

The bill was introduced after a 2012 incident in which members of animal rights group Mercy for Animals got jobs at a dairy and made undercover videos of cows being dragged, beaten, and jumped on; in response to the current proposal, the group released additional video this week, showing “a worker fondling a cow’s vagina.”

This should be great news for people worried that Idaho only makes people think of potatoes, neo-Nazis, and Larry Craig. Now the state can be famous for cow rapists, too.

The videos were terrible publicity for Bettancourt Dairy in Hansen, Idaho, and also for two of the factory farm's major customers, Burger King and In-N-Out Burger (we will again pause, as we did last year, for you to add your own joke). While Bettancourt did at least start using the videos during training to teach new employers what not to do to animals, the Idaho dairy industry also used the incident to push for a ban on any undercover filming on farms, because exposing animal abuse is just the first step toward terrorism. One Idaho legislator claimed that the bill was necessary to keep the nation's food supply safe, since, as he said, maybe it would start with animal rights terrorists and then al Qaeda would start putting poison on crops or something: “We as a nation are at risk of losing a lot of our food to terrorism,” said state Rep Dan Patrick.

Ah, but now the mean old federal courts have taken away that vital protection of the state's cow-rapers from terrorists:

U.S. District Court Judge B. Lynn Winmill found that the law violates the First Amendment, writing in his 29-page ruling that “prohibiting undercover investigators or whistleblowers from recording an agricultural facility’s operations inevitably suppresses a key type of speech because it limits the information that might later be published or broadcast.”

While Idaho wasn't the first state to pass an "ag gag" law -- seven other states have similar restrictions (thanks, ALEC!) -- this is the first "ag gag" law to be thrown out in federal court. And here's hoping it won't be the last:

Leslie Brueckner, senior attorney for Public Justice, which served as co-counsel for the plaintiffs in the case, is hopeful that the ruling will set strong precedent for other challenges to ag-gag laws across the country.

“This ruling is so clear, so definitive, so sweeping,” Brueckner told ThinkProgress. “We couldn’t ask for a better building block in terms of striking these laws down in other states.”

Judge Winmill -- who in his spare time is a source of clean, carbon-neutral energy -- rejected the claim that the videos had been deceptively edited to harm the farms' businesses, and therefore all videos of agricultural operations needed to be banned:

“The remedy for misleading speech, or speech we do not like, is more speech, not enforced silence,” he wrote in his decision.

Idaho's attorney general hasn't said whether the state will appeal, although given the amount of money that factory farming generates for the state, it seems likely it will. Yr Wonkette isn't especially into the whole "meat is murder" wing of the animal-rights crowd (and OK, maybe that's the only wing it has), but we're pretty sure that we trust factory farming operations even less. We like meat and dairy, but we also think it's reasonable to demand that agribusiness behave itself.

Now maybe some grumpy activists can take on that ridiculous Wyoming law that prevents people from taking photos of cow shit in rivers.