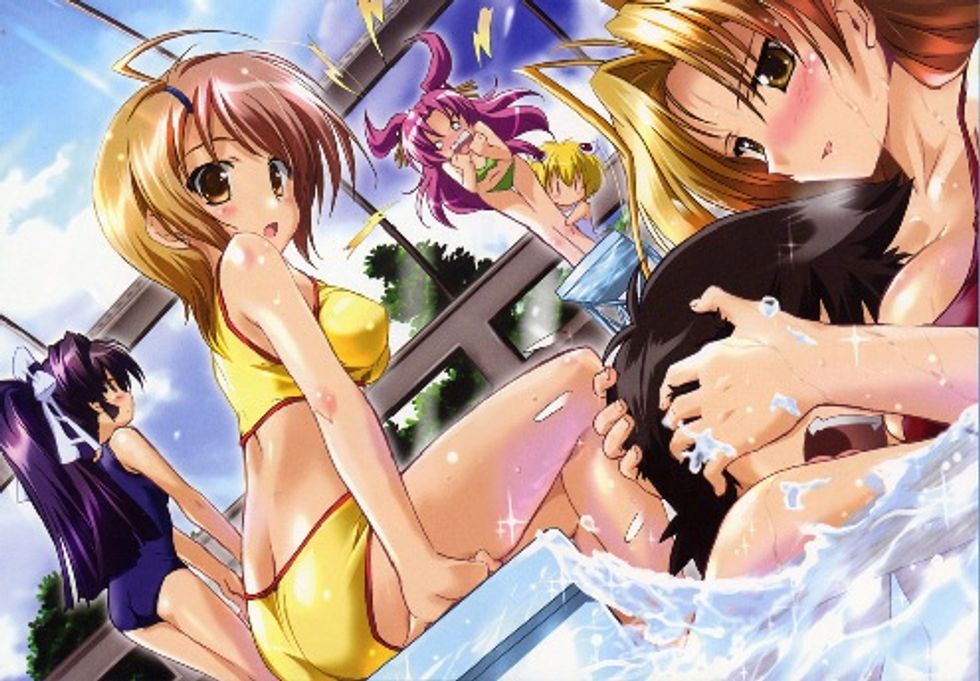 So it turns out thatMother Jones reporter David Corn has now identified the location and date of that fundraiser where Willard Mittensbjørn Rømney proclaimed that he has no use for 47% of the American people because they are irresponsible layabouts who are so addicted to the government teat that they will of course support Obama. Turns out that the poor-bashing bash was hosted by happy zillionaire Marc Leder, a private equity manager (just like Mittens!), who held the fundraiser in Boca Raton on May 17, 2012. Oh, and Mr. Leder also likes to have nekkid pool parties. Also, too, he was apparently pretty lousy at creating jobs. But did we mention the nekkid pool parties?

Before getting to the nekkid pool parties, Corn cites a New York Times story that says Leder was so impressed by meeting Romney a few years back that he was inspired to start his very own private equity firm, Sun Capital. And wouldn't you know it, it turns out that, just like Bain, Sun Capital stirred up just a teensy bit of controversy in the way it made its founder wealthy:

In recent years, a large number of the companies that Sun Capital has acquired have run into serious trouble, eliminated jobs or both. Since 2008, some 25 of its companies—roughly one of every five it owns—have filed for bankruptcy. Among the losers was Friendly's, the restaurant chain known for its Jim Dandy sundaes and Fribble shakes. (Sun Capital was accused by a federal agency of pushing Friendly's into bankruptcy last year to avoid paying pensions to the chain's employees; Sun disputes that contention.) Another company that sank into bankruptcy was Real Mex, owner of the Chevy's restaurant chain. In that case, Mr. Leder lost money for his investors not once, but twice.

Yes, yes, but what about the nekkid pool parties? WELL! Did you see that last night, Mittens held a press avail (where he even interacts with the press!) to do a little damage control? Strange, though, he didn't actually back away from his statement about those Obama voters who are dependent on the gummint; all he said was that the comments in May were not “elegantly stated.” Yes, go on, Mitt. Tell us how you were quoted out of context when you spoke to all the rich people in the quiet room!

“I am talking about a political process of drawing people in my campaign. … My campaign is about helping people take more responsibility,” Romney said.

“This is ultimately a question about the direction of the country. Do you believe in a government-centered society that provides more and more benefits? Or do you believe instead in a free-enterprise society where people are able to pursue their dreams?”

Oh, well that clarifies everything! We are not sure it was any more elegant, but maybe you'll figure out how you could have said that better when you're back in the private sector in a couple months.

OK, so the nekkid pool parties. Yes, those. Apparently, according to the New York Post, Leder's rented mansion in the Hamptons was notorious for lavish parties in the summer of 2011:

It was as if the Playboy Mansion met the East End at a wild party at private-equity titan Marc Leder's Bridgehampton estate, where guests cavorted nude in the pool and performed sex acts, scantily dressed Russians danced on platforms and men twirled lit torches to a booming techno beat.

The divorced Sun Capital Partners honcho rented a sprawling beachfront mansion on Surf Side Road for $500,000 for the month of July. Leder's weekly Friday and Saturday night parties have become the talk of the Hamptons -- and he ended them in style last weekend with his wildest bash yet.... the revelry hit a frenzied point [on July 30] before midnight when a male guest described as a "chubby white meathead" and a "tanned" female guest stripped and hopped into the pool naked.... Multiple witnesses say the naked pair continued their show outside the pool and performed sex acts on a chair in front of astonished guests.

Damn librul media is over-selling this whole "naked sex parties" angle if you ask us.