Hot Gossip: Cliven Bundy's Militia Buddies Have Broken Up, Are Never Ever Getting Back Together 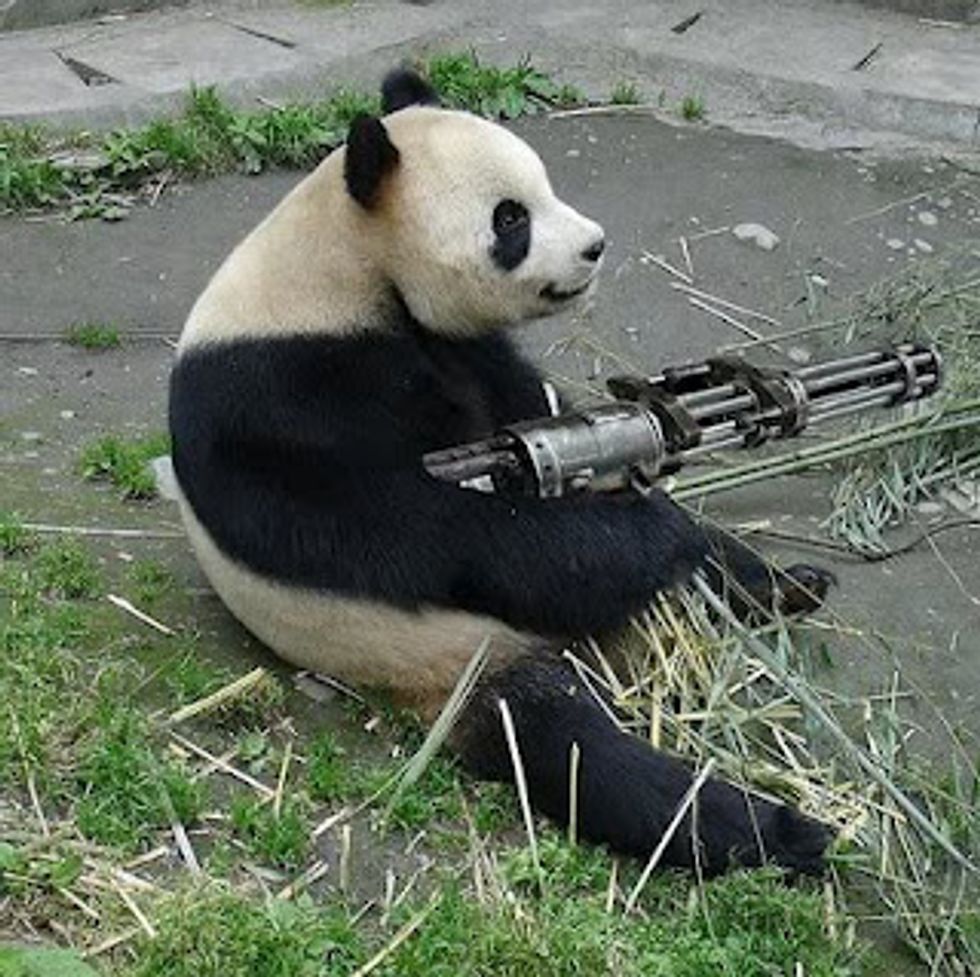 We have what appears to be an Important Update on the Bundy Ranch Seige that is no longer a Seige, although the good people of nearby Bunkerville, Nevada sure aretired of all these militia yahoos hanging around their town. And according to a piece at Daily Kos, even the militia folks are getting tired of each other.

Unfortunately, the information is rather sketchy, so please, apply grains of salt as needed. It also doesn't help a heck of a lot that one of the gentlemen in this little internecine beef goes by the pseudonym "Booda Bear," which is maybe a little ridiculous since that name is shared with a pet chew toy. (Says the blogger with a pseudonym derived from a Silver Age comical book.) At least we hope it's a pseudonym. So, here is what's shaking down at the Bundy Ranch in the Great Cowpocalypse Aftermath, maybe:

First off, Stewart Rhodes, the head of one militia contingent, the Oath Keepers, said on Friday that he'd gotten "intel" from a highly placed source that Eric Holder and the Department of Justice were going to launch a "hot drone strike" on the Bundy Ranch, because that makes perfect sense. And while Rhodes suspected that the leak may have been deliberate disinformation designed to make the militia heroes look delusional, or more delusional, he also decided, as a precaution, to "evacuate all of his Oath Keepers that have been stationed" at the Bundy Ranch, for, like, security and stuff. This decision did not sit well with "Booda Bear," the "head of security" for the Bundy Ranch. (Who made him "head of security"? We have no earthly idea; we get the impression it may be a self-appointed position, but who knows?)

In a YouTube interview, some super-patriot named Blaine Cooper,* asked Mr. Bear for a "sitrep." That is SO AUTHENTICALLY MILITARY and COOL! The sitrep was that Booda Bear was not especially impressed by Rhodes's "high value intelligence" -- which turns out to have come from an anonymous tip line. Bear also emphasized that such defections are bad for the tactical situation, since "this is a battle front in some sense of the word and to remove them is kind of ah -- that's some yellow cur -- ya know, spineless backbone, piece of shit maneuvering right there."

Yep, a battle front. Where people are willing to lay down their lives for FREEDOM and the holy cause of not paying grazing fees to an out-of-control federal government that may or may not actually exist.

Mr. Bear suggested that in his opinion, the Oath Keepers -- or maybe they should all be called Oath Breakers, haw haw haw -- were mostly just interested in going "into the next town and get hotel rooms, get showers, gamble eat steak dinners while we're out here on the battle front." You know, facing all the BLM snipers and mercenaries and black helicopters that left over a week beforehand. But could be back any minute to do some tyranny.

And so, since the Oath Keepers chickened out (in another very important video, the Booda Bear Loyalists take a vote and agree that it was "desertion" -- swear to god, it is like watching goddamn Teddy Roosevelt and the fucking Rough Riders storm Omaha Beach during the Battle of Bunker Hill here, tell you what), Mr. Booda Bear proclaimed that since he and his guys "sleep in the dirt out here, we're on shifts for 14hours a day and trying to make sure that this family [the Bundys] stays safe and secure," there were going to have to be some changes made:

If there is anything more sacred to a militiaman than the white skin that covers his ass, we don't want to know what it is.

And so, just a couple weeks after coming together to scare away the Feds and to win an enormous victory for the sacred right to never pay grazing fees on land that is not yours but is near where your family has lived for time immemorial (or at least 1948), The Great Shithead Militia Coalition has been riven by schism. We just pray it doesn't get ugly.

Also, in what may be a related note, Howard Kurtz appears to be the first person on Fox News to criticize his network's amusing/appalling fumble of Cliven Bundy's racist remarks, when Fox went all day last Thursday without mentioning the suddenly-embarrassing hero. Other panelists on Sunday's Media Buzz agreed that the network had pretty much screwed the pooch in elevating Bundy to folk-hero status, although Kurtz appeared at one point to forget which script he was supposed to be on:

“It doesn’t take away necessarily from the argument—” Kurtz began, and then: “Although he was a lawbreaker who hadn’t paid his taxes.”

Something must be done about this federal overreach in dealing with, um, recidivist lawbreakers. We just pray that doesn't get ugly either.

*In another video -- mellifluously titled "A Message to Muslims Islam and President Obama Blaine Cooper Burns the Quran! Islam Roast!" -- Mr. Cooper once courageously and with great valor burned a bacon-wrapped Quran on an outdoor grill. While wearing camouflage. For America. This apparently proved something about how degenerate all Muslims are. In his words, "Say bye-bye to your little holy book, you motherfuckers!"

He seems nice. (Hey, is this footnote one of those "buried lede" things?)

Follow Doktor Zoom on Twitter. He will send you all sorts of sitreps if it doesn't compromise OPSEC and he's not FUBAR