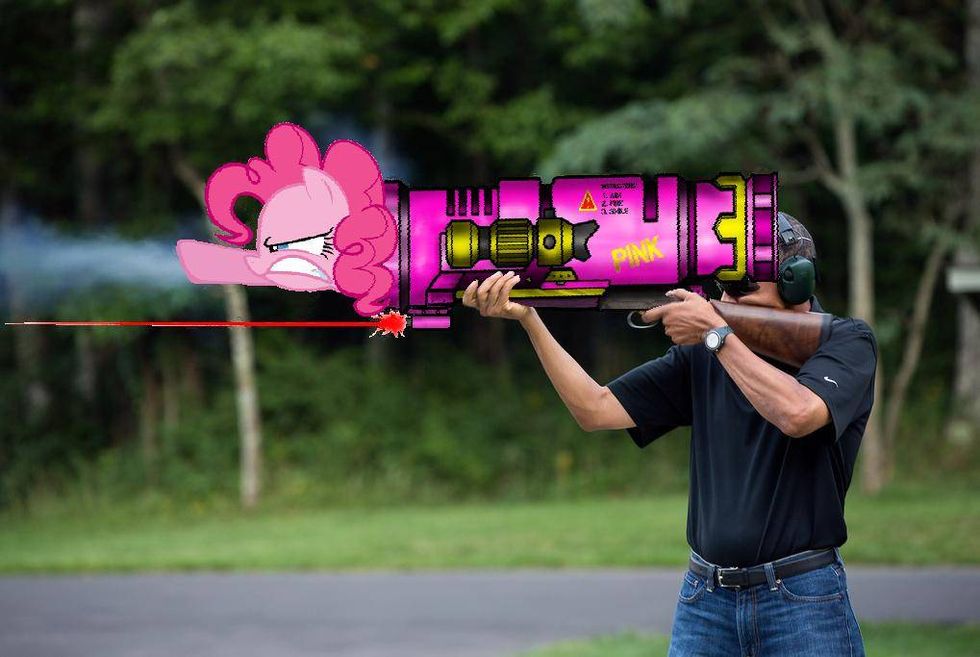 Hey, you know how Barack Obama is a liberal sissy who is too limp-wristed to handle a gun, so he fears and wants to ban them? So now, to add to that stew, there's the (actual) true fact that the administration really does believe that it's totally legal for the President to send death robots to vaporize Americans as long as they are Officially Our Enemies, because shut up is why. Mix in the "mysterious" deaths of a couple of people in January, and you have the makings of the latest nutzoid conspiracy theory: Barack Obama is sending 800 death squads to assassinate prominent gun-fondling friends of the Second Amendment.

Stephanie Mencimer at Mother Jones has looked into this so that you don't have to. Be ready to receive chain emails from your wingnut relatives about this:

According to Liberty.com, one of the sites perpetuating this latest story, Russian intelligence has outlined the whole nefarious plot in a memo for President Vladimir Putin, detailing the Obama's administration's dispatch of "VIPER teams...which is the acronym for Visible Intermodal Prevention and Response Team, a programme run by the Transportation Security Administration (TSA) and whose agents terrify millions of Americans with Nazi-like Gestapo tactics on a daily basis at airports and who report to the Department of Homeland Security (DHS)."

You had us at "VIPER teams," really. Any report with a cool acronym like that has GOT to be credible. And really, who doubts that the bored lackwits who work in airport security aren't all ready to turn into a bunch of stormtroopers at a moment's notice, once they finish fucking up our laptops and stealing cameras out of our checked luggage?

But what about the Obama Body Count? What evidence do we have that this nefarious plan is already unfolding? Mencimer says that the

Both men died in January. Noveske was killed when his 1984 Land Cruiser went off a road and struck some boulders, ejecting him from the vehicle because, presumably, no sovereign citizen cooperates with the sinister government requirement to wear seat belts. And Ratliffe was found murdered "at the weapons development and testing facility he operated in Carnesville, Ga."

So yeah, an as-yet-unsolved murder and a car crash that was "ruled to be an accident." That's pretty clear evidence of a plot to silence the most vocal advocates for the Second Amendment that most of us have never heard of -- Although Mr. Ratliffe was somewhat famous on the YouTubes, and last August sent a twitter message that read

"I went to the movies with my pistol in my pocket the whole time I was praying that somebody would try to pull a Batman!"

And just who is Batman's evil nemesis? The JOKER!!! Maybe Obama was responsible after all. Connect the dots, sheeple.

Continuing in the best Mother Jones tradition of taking wingnut claims as seriously as they deserve, Mencimer adds that she called the Russian Embassy to ask for comment, but "The press office did not return my call, so clearly it all must be true."

She also notes that the "alleged Russian security memo" seems to have originated on one of the web's more fanciful conspiracy sites, WhatDoesItMean.com, which we will have to make a point of visiting from time to time. The same site has previously "discovered" any number of doomsday conspiracies, none of which have actually panned out, but you never know. After all, maybe the 2010 Haiti earthquake really WAS caused by a US Navy weapons test.

We should not dismiss the nice people at Liberty.com as raving loonies just yet. After all, they did what any responsible news organization should do -- they said that the supposed Russian memo about Obama's VIPER teams was "unconfirmed" before going on to refer to the "Obama regimes [sic] murderous plan" and concluding that the plot is "sure to provide" the spark that will set off a "wholesale rebellion." See? They said there's still some details that need to be nailed down, so there's hardly any chance at all that paranoid gun-felchers will see this nonsense as an impetus to shoot at law enforcement officers, except perhaps for some isolated incidents perpetrated by lone nuts.

Check out Wonkette on Facebook and Twitter and even on Tumblr. And if you can name all of the Lone Gunmen from the X-Files, maybe you should follow Doktor Zoom on Twitter, also, too.