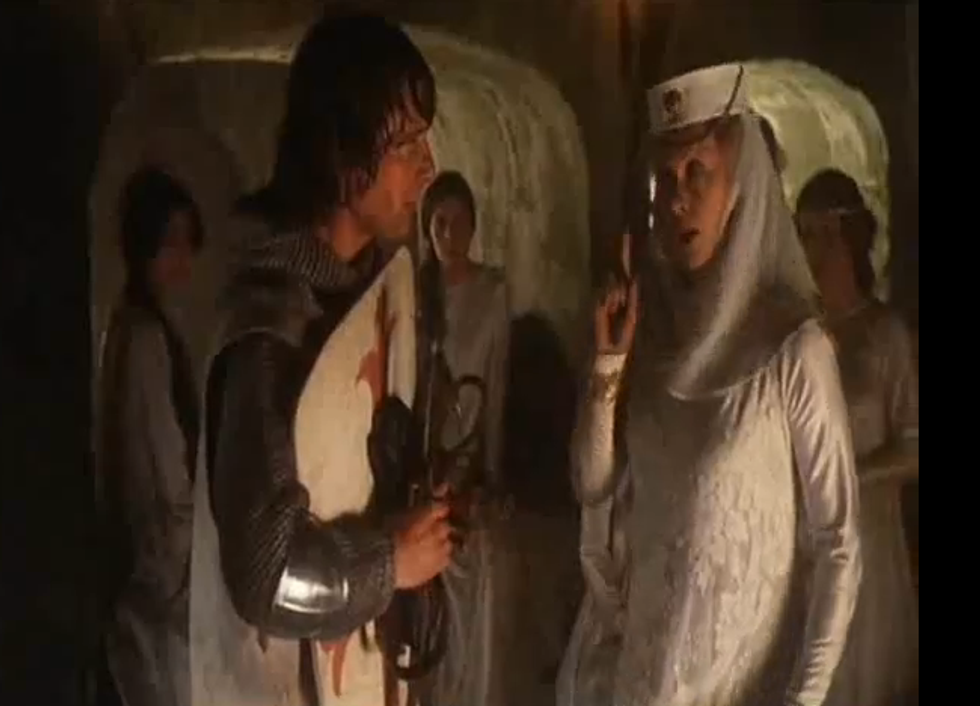 So here is one of those stories that at first looks hilariously fucked up, and then, the more you look at it, the hilarity melts away and you are left with nothing but a big sad ugly bucket of Fucked Up. We refer, of course, to Wednesday's twin explorations, at The Daily Beast and Jezebel,* of the phenomenon of Christian couples who just can't get enough of the Rod Of Correction. Only they call it “Christian Domestic Discipline,” or CDD, because what good is any sexual or religious practice without a handy set of initials? Not that these folks would ever call it a kink, of course, because kinks are fun and consensual, while CDD is about taking an already patriarchal religious orientation to an abusive extreme. And then pretending that spousal abuse is a way to praise God.

Let's start by saying that Yr Wonkette has no problem with people getting their freak on in whatever way they choose -- we are, after all, a leather-clad mommyblog with a whip. But the skeevy thing about these CDD enthusiasts -- and thank goodness, Daily Beast writer Brandy Zadrozny estimates their numbers as "in the low thousands" -- isn't that they like spanking; it's that they're treating male control of women as a freaking sacrament. You know, moreso than conservative fundamentalism already does.

Callie Beusman, writing in Jezebel, explains that women in these relationships can look forward to their behavior being constantly monitored and corrected by their husbands, in what one such group's online forum describes as "a traditional Male, head of household, female submissive, Christian Domestic Discipline relationship." These lucky women can expect disciplinary measures ranging from lectures to restrictions on their "privileges" -- frivolous things like being allowed to use the phone or meet friends or leave the house -- to being put in "time out' like a misbehaving toddler.

And, of course, the spanking (Yes! Spanking!) Only instead of the funtime enthusiastic spankings meted out at Castle Anthrax, this is some pretty grim, mean-spirited shit:

Rubbing the buttocks after the spanking, or providing ice/lotion/aloe vera is not recommended. Rubbing or providing a soothing pain reliever essentially defeats the purpose of a spanking. The spanking must be painful to act as a strong deterrent to repeating the unwanted, dangerous, or detrimental behavior in the future.

Again, this is not your garden-variety domination/submission, this is about patriarchy and keeping women in their place. For one thing, women don't get the option of taking the dominant role, for another, CDD doesn't appear to have any safewords or options to stop, because it is not a game, it's full-time gender slavery. Zadrozny interviewed psychologist and author Jim Alsdurf, who has studied abuse in fundamentalist Christian homes; he argues that CDD

isn’t about religion -- it’s an outlet for emotionally disturbed men with intimacy deficits.

“No fool in his right mind would buy this as a legitimate way to have a relationship,” Alsdurf says. “A relationship that infantilizes a woman is one that clearly draws a more pathological group of people.”

For Alsdurf, though, CDD sounds less like an act of violence and more like of an act of distorted sexual arousal. “If people want to spank each other, go ahead,” he says. “The problem of course, is if it’s done in a controlling and a mildly abusive way.” Like with all outer variables of sexual expression, he says, “If they’re not done in a healthy way they can become about abuse and control.”

Zadrozny also cites a woman who posted to a CDD blog:

“I wanted the spankings to stop and my husband told me it was either DD and marriage or divorce,” one user named “Michelle” wrote on a popular domestic discipline blog. “I chose divorce. I couldn’t handle the pain of spankings anymore, emotionally or physically.”

That's some discipline, that Christian Domestic Discipline. The worst aspects of men's rights activism and patriarchal fundamentalism, all rolled up into one evil ball. Oh, and if men make mistakes, do women get to punish them? Don't be silly -- it's up to men to "self-correct" and, as Beusman found in one CDD manual, maybe even to make a "very heart-felt and sincere apology" to their wives, and promise God to do better.

No thanks, we'll take our chances with the temptations of Castle Anthrax. They've left the Grail beacon on again.

*Sorry to have gotten your hopes up with that "twin explorations" bit. Have we been bad? Bad Zoom! Wicked, bad, naughty Zoom!