House Benghazi Report Finds No Conspiracies, Gets No Love From Fox 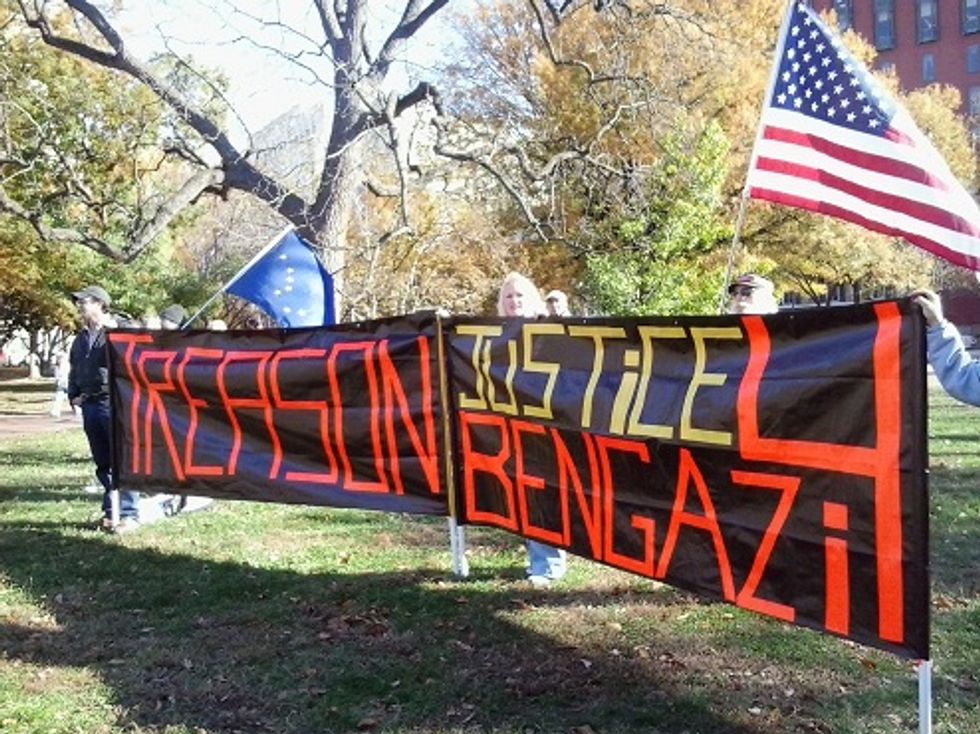 In a classic Friday news dump -- the favored method for releasing information when you hope the fewest people will notice -- the House Intelligence Committee released the results of its Great Big Benghazi Inquiry yesterday afternoon, and boy oh boy does it have some devastating news for the Incompetent Tyrant Obama: He's still a tyrant, because executive orders, but OK, maybe, um, there wasn't actually anything fishy going on at the diplomatic compound in Libya. Let's just go with the AP's lede, which clarifies exactly why this is terrible news for wingnuts (or would be, were they not impermeable to facts):

A two-year investigation by the Republican-controlled House Intelligence Committee has found that the CIA and the military acted properly in responding to the 2012 attack on a U.S. diplomatic compound in Benghazi, Libya, and asserted no wrongdoing by Obama administration appointees.

Debunking a series of persistent allegations hinting at dark conspiracies, the investigation of the politically charged incident determined that there was no intelligence failure, no delay in sending a CIA rescue team, no missed opportunity for a military rescue, and no evidence the CIA was covertly shipping arms from Libya to Syria.

In the immediate aftermath of the attack, intelligence about who carried it out and why was contradictory, the report found. That led Susan Rice, then U.S. ambassador to the United Nations, to inaccurately assert that the attack had evolved from a protest, when in fact there had been no protest. But it was intelligence analysts, not political appointees, who made the wrong call, the committee found. The report did not conclude that Rice or any other government official acted in bad faith or intentionally misled the American people.

Huh. So there was no stand-down order, Obama wasn't doing lines of coke off anyone's butt while laughing at the live video of Americans dying, and The Expendibles weren't just sitting on a runway waiting for a "Go" order that never came? For heaven's sake, it even turns out that Valerie Jarrett wasn't secretly calling the shots. But after six previous investigations by various government agencies found no malfeasance or cover-up -- not even incompetence in the chain of command -- this seventh investigation couldn't find the dirt that the Paranoiasphere just knows had to be there. Thank heavens there's still the House Special Committee on Benghazi, because the eighth time they stir through the ashes is bound to be the time they find the proof they need to charge Obama with treason.

We bet that all these vindications of the Obama administration got a lot of attention over at Fox News!

“The House Intelligence Committee says the initial assessment of the Benghazi terror attacks two years ago, that they were in fact terrorist in nature, was accurate,” Henry reported. “It says CIA and Obama administration officials later supported the incorrect scenario that the attacks were motivated by an internet video and stuck with that for several days.”

Henry didn't mention that it was intelligence analysts, not nefarious schemers in the White House, who got it wrong on the significance of the anti-Muslim video, nor did he mention that the report debunked any number of Fox hobbyhorses. And while the report found there was no validity to a favorite Fox claim -- that the CIA was secretly shipping arms from Libya to Islamic radicals in Syria -- the Fox News website did at least find a way to spin part of that rumor into a story, since the CIA was at least "gathering intelligence" on possible shipments of arms to Syria. Hey, shipping arms to radicals, monitoring arms shipments to radicals -- those are pretty much the same thing, right? The main thrust of the article? A call for the Senate to join the House in Investigation Number Eight.