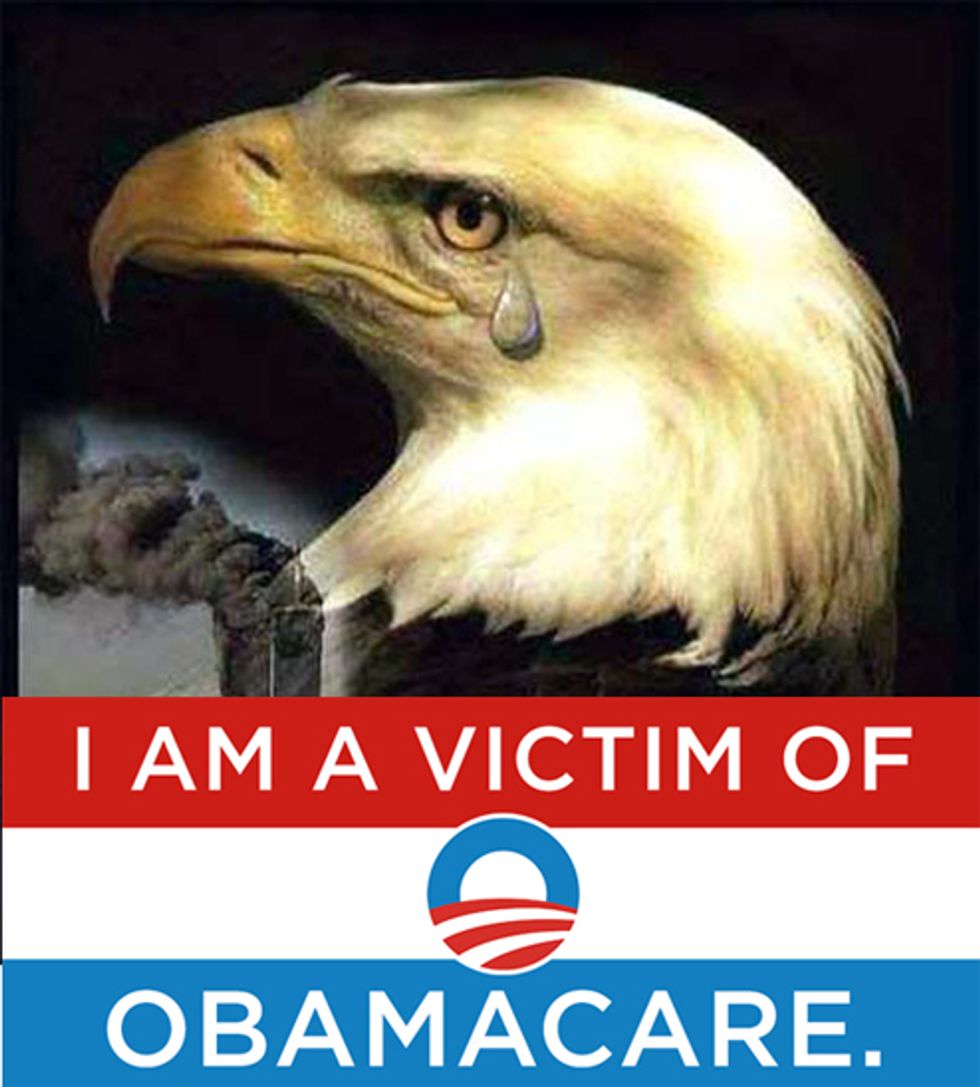 Remember like a million years ago, or 2014 at least, when the House of Representatives sued the Obama administration for being tyrants with all the Obamacare? It was John Boehner's smart maneuver to take some kind of action short of impeachment against Barack Obama for presidenting without a license, and it did such a great job of keeping the tea party loons happy that Paul Ryan is now speaker of the House. Well, that long-ago bit of political theater actually ended up with the House winning, as a federal judge ruled Thursday the way a portion of the program is funded is totally tyrannical and illegal, although not quite so illegal that Obamacare has to shut down right this minute.

We refuse to get bogged down in reviewing all the details of the case for you, because there isn't a single dick joke to be made about any of it, so why bother? Here's the short, news-roundup version: U.S. District Court Judge Rosemary M. Collyer, a George W. Bush appointee, ruled that Congress authorized a part of the law, but never appropriated funds to pay for it. As we cribbed from the New York Times when the lawsuit was filed in 2014,

That issue involves subsidies known as cost-sharing reductions, which the federal government pays to insurers on behalf of people whose incomes range from the poverty threshold to two and a half times the poverty threshold ($11,670 to $29,175 a year for an individual). If the lawsuit is successful, poor people would not lose their health care, because the insurance companies would still be required to provide coverage -- but without the help of the government subsidy, the companies might be forced to raise costs elsewhere.

Up until now, the Department of Health and Human Services has been covering those cost-sharing subsidies by transferring funds from a related tax credit account -- the part of the program that helps Obamacare enrollees pay for their premiums. Congress's lawsuit said no, you can't pull that sort of financial sleight of hand for a program that requires appropriations authorized by Congress, and we will never, ever, ever pass such an appropriation because DIE, OBAMACARE, DIE!!!! Judge Collyer agreed, writing in her ruling, "Congress is the only source for such an appropriation, and no public money can be spent without one."

Exciting stuff, huh? And you thought the Death Panels would be the end of Obamacare, when really it's this one weird accounting trick. Collyer did at least stay her own ruling, allowing the program to continue as it has been while the case is under appeal.

Republicans were semi-jubilant over the victory, at least those who even remembered that the case was making its way through the courts. House Ways and Means Committee Chairman Kevin Brady hailed the ruling (which is the only time anyone hails anything other than a cab) as a check on "an administration that has repeatedly ignored a fundamental principle of our Republic: the separation of powers," which is a pretty lofty idea.

This is not the first time that we’ve seen opponents of the Affordable Care Act go through the motions to try to win this political fight in the court system.

If you find the intricacies of health care funding simply fascinating, Politico lays it out pretty clearly; this case seems in many ways similar to King vs Burwell, the last challenge to Obamacare that went to the Supreme Court, in that there's not so much a huge Constitutional question at stake so much as a matter of how the law actually was put into practice. If Republicans hadn't made it procedurally impossible to fine-tune the legislation so budgetary workarounds weren't necessary, the court case wouldn't even have arisen.

As with other chunks of the Affordable Care Act, it's not so much that the law is inherently unworkable as that Republicans have done everything in their power to make it not work -- in this case, refusing to pass an appropriation that would have funded the cost-sharing subsidies. The good news is that the appeals seem unlikely to go in the House's favor:

Collyer’s opinion will appeal to the United States Court of Appeals for the District of Columbia Circuit, a court with a Democratic majority. After the death of Justice Antonin Scalia, moreover, the Supreme Court’s conservative bloc no longer enjoys a majority [...]

Jonathan Adler, a conservative law professor with his own history of backing litigation seeking to gut Obamacare, predicted that the House would lose its case 7-2 if it went to the Supreme Court, with Scalia in the majority.

If the case goes all the way to the Supremes and they somehow decide in favor of the House, it wouldn't kill off the ACA altogether -- it would just kill off the cost-sharing subsidies, thus requiring a lot of people to pay more for their insurance. That way, Republicans could yell, "See? Obamacare was never affordable! And now that our lawsuit has made it a lot more expensive, maybe people will understand that!"