House Passes GOP Tax 'Cut' Raising Taxes For Everyone Under $75K. Champagne All Around! 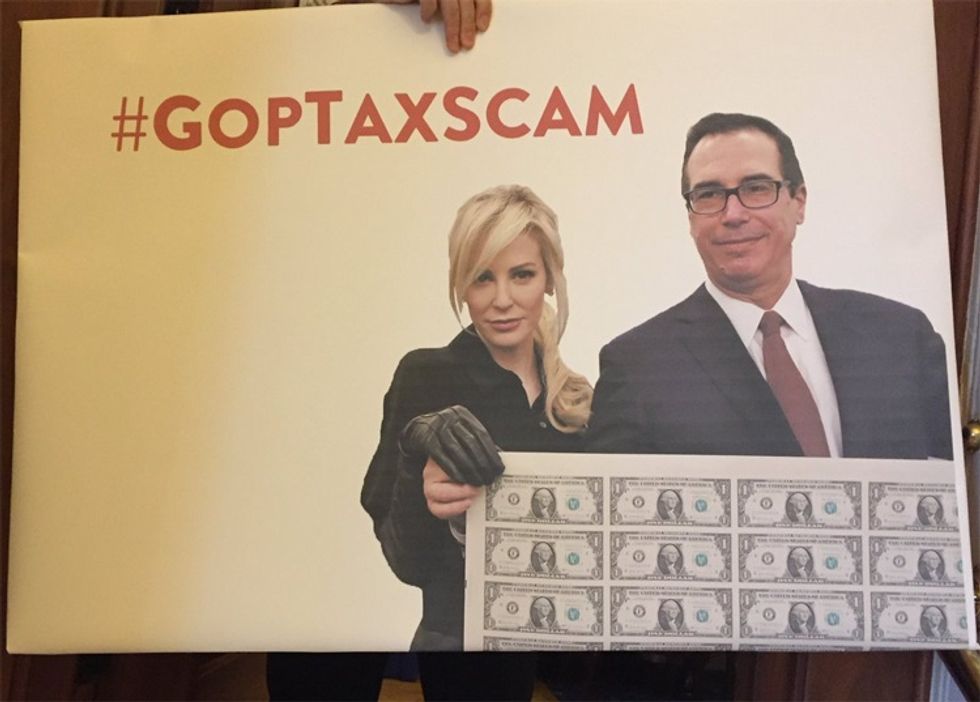 Sign being delivered to House floor by a Democratic staffer today.

Hooray! The House just passed its version of the Great American Tax Cut Reward To The Already Rich Act of 2017! Now we can look forward to Senate Republicans falling all over themselves, coming up with ever more inventive ways to fuck over the poor, and, if it passes, throwing themselves a hero parade. If the whole thing ultimately fails, they'll blame Democrats, who they're cutting out of the process anyway.

And we also now know that Donald Trump and the Republican party, champions of the Forgotten Americans who have always gotten the fuzzy end of the economic lollipop, are pushing a tax plan that will ultimately raise taxes for every American making less than $75,000 a year by 2027, according to a report from Congress's Joint Committee on Taxation. Here's the relevant table from the report (it's on page 5 of the actual report, if you're following along at home:

Let's take a closer look there!

Now, as The Hill notes, there would be an overall average tax cut of 7.4 percent in the first year of the plan, especially for the richest Americans, which is the point. But even the average tax cut for individuals would evaporate by 2027. Oh yes, and by 2027, the poor would really get soaked, because they need to be punished for not investing their millions in hedge funds:

That's one hell of a relief for the poor and middle class, isn't it? The bill's tax cuts on individual income are set to sunset, to at least on paper limit the amount the bill would increase the deficit. But the tax cuts for corporations are permanent, at least until another Republican president starts whining the poor Corporate Persons are still overtaxed and we need another cut to get the economy booming like tax cuts never do.

But there is also some good news, maybe: Americans overwhelmingly think this tax plan is stinky icky poo on an ugly stick, according to a Quinnipiac University poll released Wednesday. Only 25 percent of those polled approve of the Republican proposal, and 52 percent opposed it, with the remaining almost-quarter either not sure or answering "No way is Blake Shelton the sexiest man alive." And those numbers came from polling done before Senate Republicans added in a partial repeal of the Affordable Care Act, which has actually become pretty popular since Trump and the Republicans spent all summer trying to kill Obamacare and leave tens of millions without healthcare.

So now the tax bill goes to the Senate, which will rush through "debate" and a vote the week after Thanksgiving. Don't let the bastards get away with it -- get on the phones AGAIN, folks.