House Republicans Find Billions Of Dollars Under Couch Cushions, Will Spend It On War 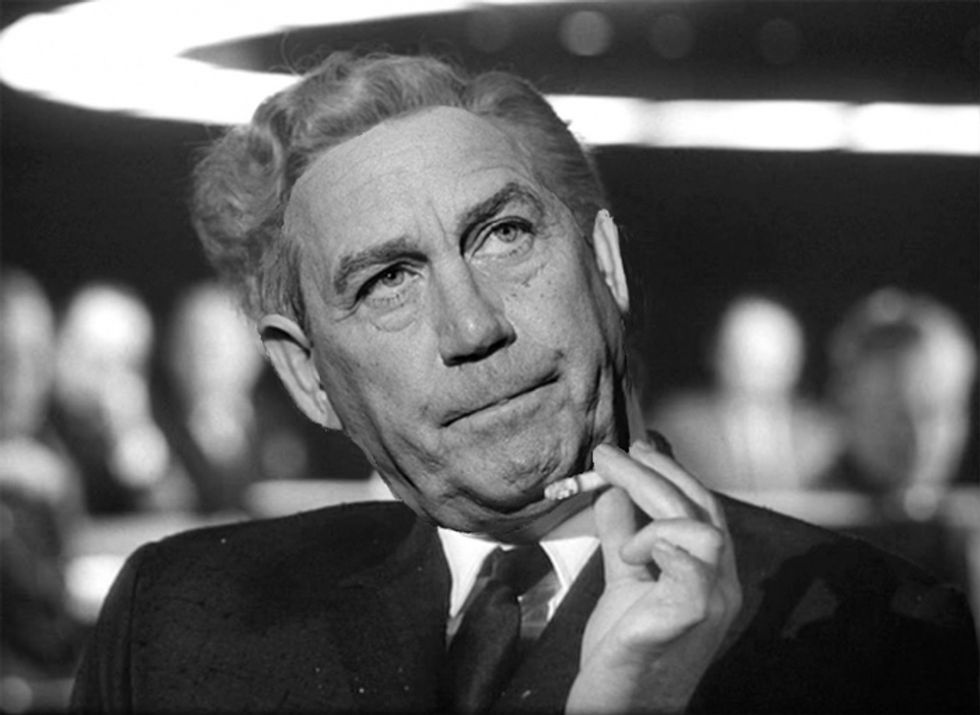 You know how we do not have any money? And we are drowning in debt? And we should abolish the IRS and the Department of Education and repeal all healthcare and privatize Social Security and "fix Medicaid" by killing it dead so we can drown the U.S. government in a bathtub? And Arizona Sen. Jeff Flake is real concerned that we spend a whopping $135k a year to quarantine cocoa plants so they do not die from disease and infestation and we do not run out of chocolate, and that's a horrible waste of taxpayer dollars, and that's why we're so broke?

Forget all that, we are flush with cash, it turns out. At least for doing war. Lots and lots of war. All the war. Endless war. And then even more war on top of that:

The bill keeps ceilings on defense spending in place under the 2011 budget deal that introduced sequestration spending limits, but would increase funding to the Pentagon's war fund.

The legislation authorizes roughly $523 billion in base Defense Department spending. Another $90 billion is included in the war fund, formally known as the Overseas Contingency Operations fund.

It includes $38 billion more for the war fund than had been requested by the White House. The extra spending is not offset by spending cuts or tax hikes.

Yes, that's today's GOP for you. (Only eight Republicans voted against the bill; most Democrats voted against it, at the urging of House Minority Leader Nancy Pelosi and the rest of the party's leadership, although 41 Democrats just couldn't help themselves.) This is the same party in which several distinguished members, including some running for president, think it's at least worth considering whether untrustworthy President Obama might be secretly planning to invade the sovereign nation of Texas with so-called military exercises and then establish martial law, because that's just the sort of thing the president would do. And this is the same Republican House that passed a "budget" in which, gosh, there's just no more money for dumb things like food stamps and studying climate change.

While House Republicans allowed all sorts of debate on various amendments to this spending bill, Speaker John Boehner didn't want to hear a word about whether Congress should actually authorize the president to use all that sweet war cash -- which is actually the job of Congress, it says so right in the Constitution, unlike trying to ban abortion, which is not in the Constitution and is in fact unconstitutional, but that didn't stop House Republicans from voting to do that this week too. But when it comes to doing war on all the countries? Obama has the Authorization for the Use of Military Force, passed in 2001 by the congressional pants-shitters who were so terrified after 9/11 that every single member except for California Rep. Barbara Lee (D-Hero) voted to let the president do whatever the hell he thinks is necessary to fight The Terrorists. That should be good enough.

So Boehner and company are quite sure the Obama administration can handle bombing Syria, Iraq, and whoever without being micromanaged by the House. And while Boehner and the rest of his party are quite sure the president has illegally power-grabbed America and crammed all sorts of Kenyan socialism down its throat, Boehner is outraged -- OUTRAGED! -- that Democrats opposed this spending bill:

"They did so without listing a single serious policy concern, letting politics come before national security," he said. "With all the threats our troops face and the sacrifices they make, Democrats’ opposition to this defense bill is in fact indefensible.”

Concerns like "Hey, how are we gonna pay for this thing?" and "Hey, is it really a good idea to let the president go around making war without congressional oversight?" are not "serious policy concerns," you see. Not according to the oh-so-serious Republican Party, which will get right back to the serious policies of policing vaginas and gutting aid for America's students, poor, and elderly -- just as soon as Boehner signs this big fat blank check to go around bombing everyone.