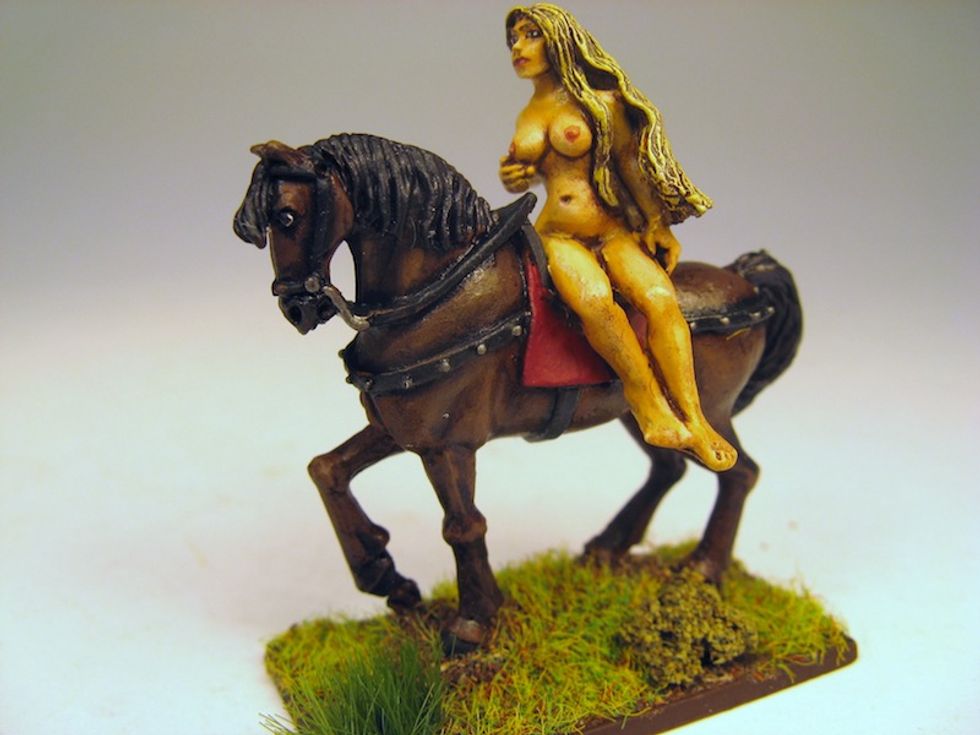 Two mornings ago, our husband flagged for us a silly story about some dumb Montana derp farmer trying to outlaw "simulated" nudity. He flagged this story for one reason only: WHAT WOULD HAPPEN TO THE TRUCKNUTZ??? "Haha, poor TruckNutz," said we, and threw it out to the hordes in the chatcave. Our executive editor, Kaili Joy Gray, wrote it up and that was that. "Dumb Montana derp farmer; simulated nudity; naked bicycle rides; the end."

But was it the end? IT WAS NOT! The next day, every liberal blog in existence (plus Bloomberg) wrote their hilarious aggregation of the topic, and all of a sudden, the story -- which you saw, it was everywhere -- became "Montana Idiot Tries To Outlaw Yoga Pants." It's catchy! It has yoga pants in it! People are really hot for yoga pants for some reason! And it was just completely untrue.

We all remember the dark days of journalists sneering at Cheeto's-covered bloggers, so you will be glad to know the "journalists" at Bloomberg are simplistic traffic whores too. But how did this totally wrong story so quickly spread? Because people are stupid and lazy. In this case, it started with Mother Jones.

Montana Republican state Rep. David Moore has a plan to guide America out of the darkness—ban yoga pants.

Moore, who is upset that group of naked bicyclists pedaled through Missoula last year, decided that what his state really needs right now is tighter regulations on trousers. His proposed bill, HB 365, would outlaw not just nudity, but also "any device, costume, or covering that gives the appearance of or simulates the genitals, pubic hair, anus region, or pubic hair region." Per the Billings Gazette:

The Republican from Missoula said tight-fitting beige clothing could be considered indecent exposure under his proposal.

"Yoga pants should be illegal in public anyway," Moore said after the hearing.

Moore said he wouldn’t have a problem with people being arrested for wearing provocative clothing but that he'd trust law enforcement officials to use their discretion. He couldn’t be sure whether police would act on that provision or if Montana residents would challenge it.

"I don't have a crystal ball," Moore said.

Merlin's pants! According to the Great Falls Tribune, Moore elaborated that he also believes Speedos should be illegal.

HB 365 continues a miraculous stretch for the Montana legislature. Just last December the Republican-controlled legislature issued new dress-code guidelines for the state capitol, advising women that they should "should be sensitive to skirt lengths and necklines."

So, here is what happened: idiot wants to ban simulated nudity. Later, after a hearing, he opines that he thinks yoga pants ought to be illegal too, because he is Grandpa Simpson apparently. Mother Jones says "idiot wants to ban yoga pants" even though there's nothing like that anywhere in the bill he actually introduced (tight clothing does not "simulate" asses or cocks or vengetables). EVERYONE ON EARTH FOLLOWS MOTHER JONES. And they all reap some sweet sweet lazy-ass traffic.

Who got some of it?

Salon did. (They did include an editor's clarification that um, right, there was actually no such bill.)

And RawStory did, with the extra special headline sauce of "Montana Taliban," which probably isn't that far off. Dude's a fucking loon.

The Washington Post at least clarified three paragraphs into "Absurd Things That Almost Happened: Montana's Yoga Pants Ban" that the bill does not ban yoga pants despite the fact that "everyone has been reporting [that]," so good on you, Washington Post, sort of.

TPM also had it right:

A Republican Montana lawmaker looking to expand the state's indecent exposure law thinks that yoga pants should be banned in public, but stopped short of proposing a ban.

That didn't stop them from reaping the traffic though.

Oh, look, here is some news!

Friends, bloggers, countrymen? Can we agree on something here? Can we agree, for the good of our nation, and of our own souls, and even if it is sort of a slow news day, that when we are aggregating something, we actually go to the source and see if it's bullshit first before we uncritically pass it along? Maybe read the actual bill? A few liberal sites -- who used to be known for good, and intellectual honesty -- are now so notorious for headlines that aren't borne out by the stories below them, that when we read them, we warn each other, "_____'s headline says the minister was arrested? Make sure they didn't mean 'the minister was [not] arrested.'" And then we laugh and laugh and laugh at them. But people are believing this shit, and lack of regard for the truth is best left to Gateway Pundit and Betsy Rothstein. We're supposed to be the boring ones who are giving it to you straight.

And if, in your opinion, Montana taking time out from its NINETY DAY legislative session -- one that happens EVERY TWO YEARS -- to debate flesh-colored pasties and nude bicycle rides is a story that still needs sexing up, maybe get a job at Fox.

They love their shit made up for you wholesale.