How Are The Feminists Keeping Men From Getting Laid Today? 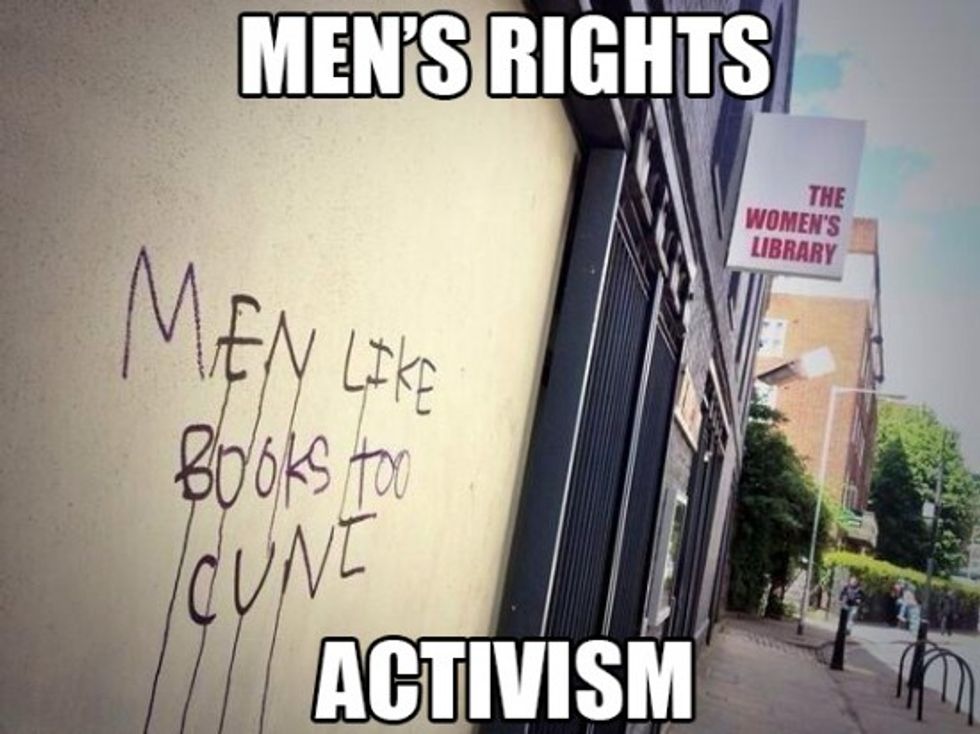 Nothing like kicking off 2015 with a few stories about how bad men have it in today's modern feminist-dominated world, where men are on the verge of being ruined by all these radical feminists running loose and running everything, but still not doing sex to the Men's Rights Activists for some reason.

For instance, there's this tale of oppression from an MIT professor who explains that we don't need more women in Science, Technology, Engineering, and Math (STEM) fields because women are already really scary to talk to since they'll accuse you of sexually harassing them.

MIT professor Scott Aaronson set off a Twitterstorm back in mid-December with a long comment on his own blog, in which he said some stupid stuff about how he couldn't possibly be one of those people with white male privilege, because as a male nerd boy, all he ever heard about male sexual desire was that it was a precursor to rape, and he's been feeling very unempowered ever since. He has been taken to task in a couple of major columns by lady writers, and while he has since amended and extended his remarks, he nonetheless comes off sounding more than a little bit clueless.

It all started when a woman commented that, at conferences she'd attended, "some of the gropiest, most misogynistic guys I’ve met have been of the shy and nerdy persuasion," and he replied that, as a nerd person, he has actually felt very un-privileged himself:

Here’s the thing: I spent my formative years—basically, from the age of 12 until my mid-20s—feeling not “entitled,” not “privileged,” but terrified. I was terrified that one of my female classmates would somehow find out that I sexually desired her, and that the instant she did, I would be scorned, laughed at, called a creep and a weirdo, maybe even expelled from school or sent to prison.

Obviously, this is feminism's fault, for making him feel like his normal desires are perverse! And he really does know what feminism is all about, because he has read the most radical feminist voice of the 1970s:

You also say that men in STEM fields—unlike those in the humanities and social sciences—don’t even have the “requisite vocabulary” to discuss sex discrimination, since they haven’t read enough feminist literature. Here I can only speak for myself: I’ve read at least a dozen feminist books, of which my favorite was Andrea Dworkin’s Intercourse (I like howls of anguish much more than bureaucratic boilerplate, so in some sense, the more radical the feminist, the better I can relate). I check Feministing, and even radfem blogs like “I Blame the Patriarchy.” And yes, I’ve read many studies and task force reports about gender bias, and about the “privilege” and “entitlement” of the nerdy males that’s keeping women away from science.

Nothing proves that you're serious like citing a figure who is to modern feminism what NAMBLA is to discussions of gay rights. As Amanda Marcotte notes, Dworkin isn't referenced by feminists much anymore, but to MRAs, she's the very epitome of feminism, and most feminists believe that all intercourse is rape. Dworkin is the "Robert Byrd was a Klansman" of gender discourse, except for how she didn't even serve in the Feminist Senate. And so on, with the usual catalog of Oppression by Feminists:

Happily, Aaronson found math, and that kept him sane, but now the women, who don't want to sex him and will punish him if he admits he thinks ladies are pretty, are trying to break down the doors of his happy nerdy enclave, too, poor dear, and they are coming for his Johnson. Perhaps we oversimplify his argument a bit -- it's honestly too long and tedious to give much more attention.

In another tale of male victimization, we also learn that there is something called "Manbook," which is an MRA-based social networking site for the He-Man Women-Hater's Club. It is run by someone named Joschua Boehm, who is also named, depending on where he pops up, "Peter Nolan, Peter-Andrew: Nolan, and Joschua-Brandon: Boehm." Those last punctuation abortions possibly indicate that in addition to being an MRA, he's also maybe a Sovereign Citizen. (For all we know -- they're big on punctuation and capitalization games, but maybe Mr. Boehm is borrowing that for a separate patriarchal purpose.)

But would women respect his demand that Manbook be "a place where men and boys down to about the age of 16 can come and discuss the issues on their minds without the censorship of fascist [Face]book” and keep their gross slimy girl electrons off his pristine testosteroney website? They would not, so Boehm recently lamented:

We have asked politely for women to not register but you are registering anyway. This shows total lack of respect for our right to freedom of association. We do not wish to associate with women in this place. Period, [...] Since women have so immediately shown us men that you do not respect our right to freedom of association we will summarily delete any account that has a womans [sic] name on it.

And what's he prepared to do if ladies keep sullying his website with their presence? Probably something that's only fair, like threaten to kill them:

Good to see he has a sense of proportion.

And finally, a possible solution to all this gender warring, from Fox News, where Fox & Friends spent part of New Year's morning flogging an exciting dating guide, written by men, telling women what they need to do to catch and serve a man.

Co-hosts Peter Doocy (aiiee, they spawn?), Clayton Morris, and grinning death's head Ainsley Earhardt were all very excited about some of the advice:

“Well, how about this one?” Doocy continued. “When he gets his ego stroked, he’ll be more inclined to love you more.”

Doocy said that one way a woman could stroke a man’s ego would be to “prepare his meals, draw him a bath and massage his feet every now and then.”

“All in for foot massages,” Doocy added.

“We had a lady on earlier saying, give to give,” Earhardt explained. “And that’s the thing you have to remember. You’re giving to your husband because you want to, not because you’re expecting something in return.”

“My wife does cook, and she does give me foot massages,” Morris bragged.