How Can Donald Trump Cut Taxes When He Already Doesn't Pay Any? 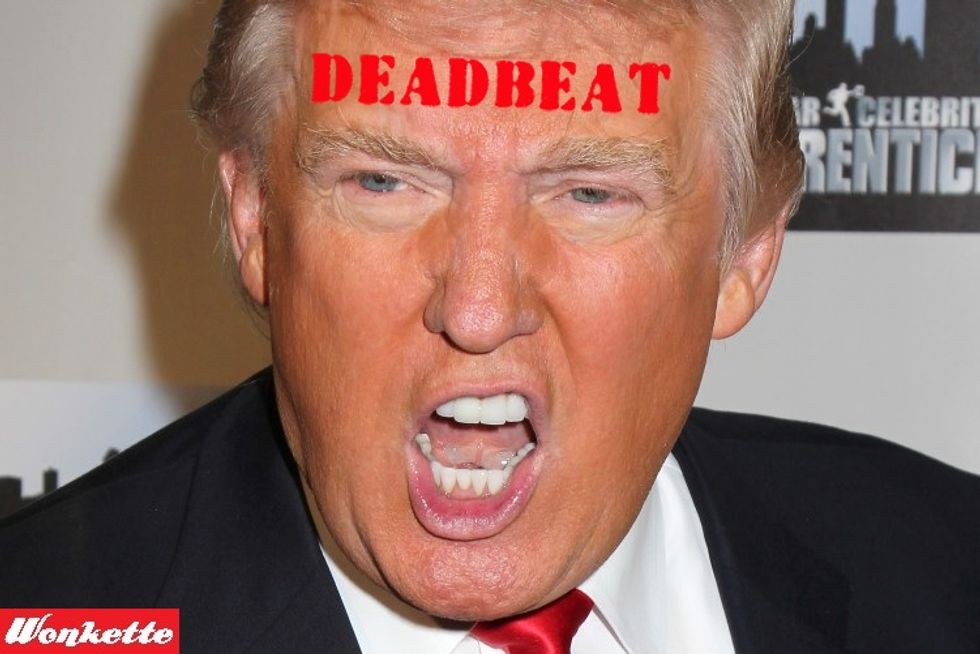 Also wants to loosen those pesky truth in labeling laws

We do hope you kids are sitting down for this news: Looks like Donald Trump doesn't pay no income taxes, ever. Maybe. At least in the past, he hasn't. Ace eat-the-rich reporter David Cay Johnston found evidence of Trump's nonpayment in documents from two tax appeals Trump filed back in the '90s, when he was still dumb enough to leave a paper trail. He lost both those appeals, by the way.

In one case, Johnston found,

Trump listed no income on that form, yet he deducted $626,264 as expenses. His New York City tax return also showed no income, but listed slightly less in expenses: $619,227

Huh! So he had no income, but somehow managed to deduct over $600K? That's quite a feat. He also didn't include any "receipts, invoices, or other documentation" for either the audit or the appeal of the 1984 return, in which he claimed he was being dunned for way too much in taxes. That didn't go over so well with the judge in the case, for some reason:

“The record does not explain how Petitioner [Trump] had significant expenses without any concomitant income from his consulting business,” wrote H. Gregory Tillman, the city administrative law judge who heard the case on April 29 and May 28 of 1992.

"Tillman" doesn't sound like a Mexican name, but that should probably be looked into.

To further muddy the waters, Trump's lawyer and accountant, Jack Mitnick, who did all of Trump's taxes at the time testified at the appeal that his firm hadn't prepared the 1984 return that he was shown a photocopy of, although his signature was on it. The judge pointed out (possibly while smuggling immigrants across the border) that the original return hadn't been found. Johnston finds that curious:

Among the issues raised by Mitnick’s 1992 testimony is whether Trump or someone acting on his behalf substituted a return that he or someone else prepared and then transferred Mitnick’s signature using a photocopier.

[wonkbar]<a href="http://wonkette.com/601790/i-dont-know-how-to-tell-you-this-but-donald-trump-might-have-said-something-untrue"></a>[/wonkbar]Maybe it was John Barron! It sounds like the kind of thing he or John Miller might have gotten up to. In his decision in the case, Judge Tillman rejected, in boldface, Trump's claim that he was being taxed double: “The problem at issue is not one of double taxation, but of no taxation.” To be fair to Trump, word processors were still pretty new then, and people sometimes used a lot of unnecessary fonts. Especially Mexicans.

The other case Johnston looked at was a tax appeal filed with New York State in 1994, and once again involved deductions for 1984. Like the other appeal, there wasn't any supporting documentation.

It was in this appeal that the record shows Trump paid no income tax in 1984.

“Mr. Mitnick has prepared Donald Trump’s income tax returns for the last 20 years and testified that Mr. Trump had no income tax due against with the credit ‘could have been applied,’” Judge [Frank W.] Barrie wrote in his 23-page opinion.

[wonkbar]<a href="http://wonkette.com/602443/donald-trump-media-veterans-donations"></a>[/wonkbar]Imagine that! Johnston dutifully notes that the Trump campaign didn't respond to two emails he sent, asking "detailed questions about the two cases." Silly journalist! Don't you know your job isn't to ask a lot of boring questions about stuff that happened a long time ago? Your job is to tell the world what a great job Donald Trump has done! For the vets!

Johnston also reminds us -- unfairly, probably -- that Trump has gone back and forth on whether he'd ever release his current tax information, first saying he would, then claiming he can't, since he's being audited (never mind that tax attorneys and even a former head of the IRS have said, oh yeah, he can release them, no problem), and then finally, on May 13, Trump yelled at an ABC reporter who kept asking questions (like that's even allowed!), saying that his federal income tax rate “is none of your business.”

This is the second time reporters have found tax returns with no income on them; in May, the Washington Post found a 1981 report by gambling regulators in New Jersey which showed Trump

had for at least two years in the late 1970s taken advantage of a tax-code provision popular with developers that allowed him to report negative income.

You mean to say Donald Trump is a schemer who'll exploit any loophole to his advantage? That's not graft, that's leadership, or something.

Besides, it was all such a long time ago. By now, Trump probably pays way too much in taxes, like "some" or "a little." And every penny pains him. No, you can't know how much or how little. It's none of your business.

Look over there! Muslim terrorists!