How Donald Trump Will Increase Defense Spending: So Much Magic, We'll Get Sick Of Magic! 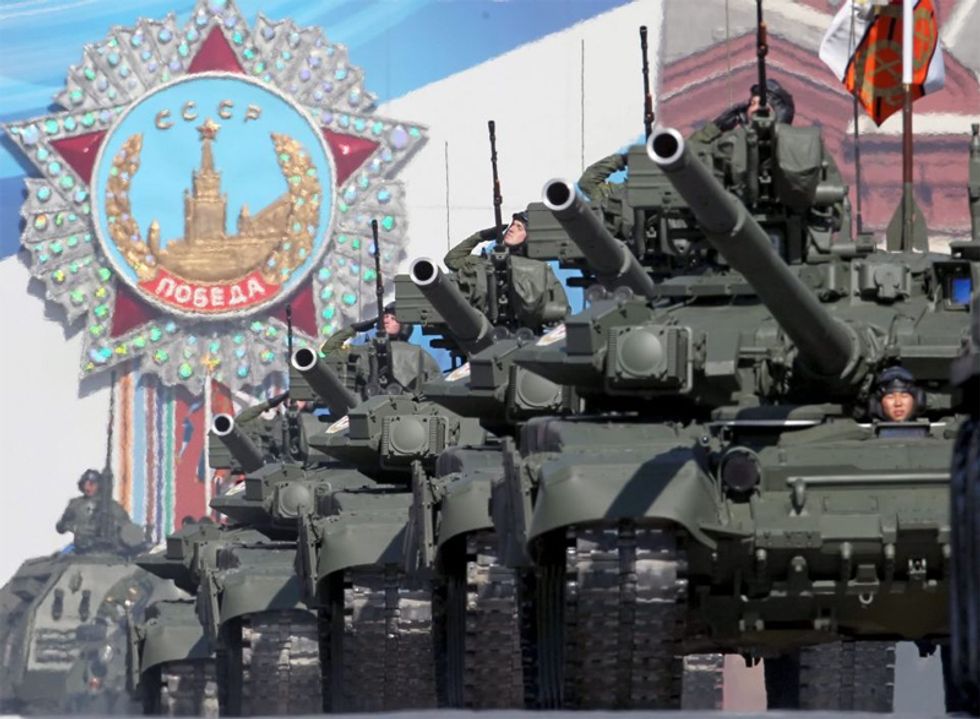 You get the idea. We can add in a U.S. flag later.

Donald Trump knows math real good, so his budget plan, which he'll presumably roll out during Tuesday's address to a joint session of Congress -- unless he goes off-prompter and spends the whole thing yelling at the press and re-living every moment of the 2016 election -- promises a fantastic military buildup and corresponding cuts in everything else. The proposal for a $54 billion military increase comes even before any consideration of the enormous tax cuts Trump also wants, but don't worry, we can afford that too because whenever you cut government revenue, the economy grows so much government revenue actually goes up, just like it never did during the Reagan and Bush II administrations.

But this $54 million defense increase: Trump's going to pay for it with MAGIC, by cutting foreign aid!

In a statement at the White House on Monday morning, Trump said that his budget would put “America first” by focusing on defense, law enforcement and veterans using money previously spent abroad.

“We are going to do more with less and make the government lean and accountable to the people,” Trump said. “We can do so much more with the money we spend.”

This is really some pretty impressive magic, since while everyone thinks foreign aid is a huge part of the budget, it's really less than one percent of spending. Depending on what you count as "foreign aid," that worked out to between $31.3 billion and $39.9 billion in 2013. And we're fairly sure Trump isn't going to eliminate foreign aid. So where will the money for the defense increase come from? ALL OF IT, KATIE. Trump has promised not to touch the biggest parts of federal spending, Social Security and Medicare (although congressional Republicans would love to eliminate or privatize Medicare for him), so once we trim a few fighter jets for Saudi Arabia, what's left to cut?

Defense spending accounts for almost the same proportion of the federal budget as all non-discretionary domestic spending, meaning that the Trump administration’s proposal will result in a roughly 10 percent across-the-board cut in all other federal spending programs.

Most federal agencies would see substantial reductions in their budgets, said the Office of Management and Budget administration official, who spoke on the condition of anonymity on a call with reporters to discuss the proposal.

Oh, and Trump also wants to increase infrastructure spending, maybe by a trillion bucks, but he didn't talk about that, or where the money would come from. Maybe eliminating the National Endowment for the Arts, which gets $148 million a year. That should cover a few miles of highway. Needless to say, in his statement, Trump just made up a bunch of numbers:

“We’re going to make it easier for states to invest in infrastructure,” Trump said. “We spent $6 trillion in the Middle East, and we have potholes all over our highways and our roads.”

See? Stop spending all that money in the Middle East (OK, a good chunk of it is for wars, and we NEED those) and we'll be swimming in cash. Unless that $6 trillion figure came out of Trump's ass? Oh, it did, kinda:

Trump is lumping together the wars in Iraq (in the Middle East) and Afghanistan (in South Asia), which together cost about $1.6 trillion from 2001 to 2014. He is also adding in estimates of future spending, such as interest on the debt and veterans care for the next three decades.

Huh. So thirteen years of wars plus thirty years of projected spending, including some that isn't in the Middle East. It's almost as if he were trying to mislead people about how easy it'll be to pay for an enormous military buildup and a tax cut. Oh, and if we're going to wipe out Radical Islamic Terrorism, we can't really save any money in the Middle East at all, can we? Math is hard:

So anyhow, get ready for government to get leaner and meaner -- much, much meaner -- and don't worry too much about paying for all the tanks and planes and ships and bombs. We need those, and we can probably pay for them by making sure the IRS spends less on paper clips. And if not, we can always borrow the money from China.

Yr Wonkette doesn't take a penny from the federal government, except for that soybean subsidy we're not supposed to talk about. Won't you help us stay ad-free by making a generous donation?