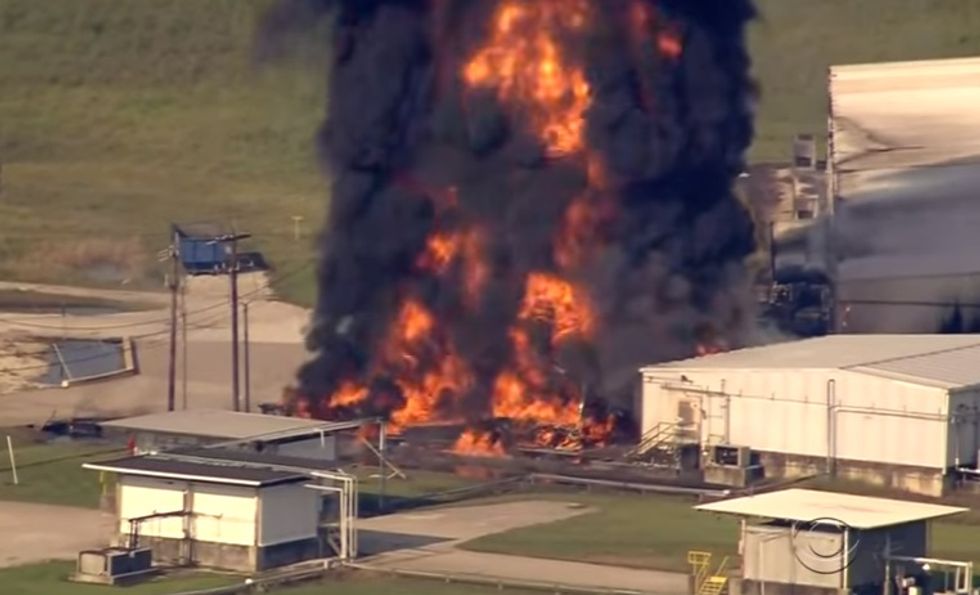 The Environmental Protection Agency is not so much into "protecting" the "environment" under administrator Scott Pruitt, and frankly, they're pretty darned angry that anyone would think they're supposed to be doing that in the middle of a natural disaster anyway. When the Associated Press reported on flooded Superfund toxic waste sites in Texas and said the EPA hadn't yet physically visited the sites -- which AP reporters somehow managed to get to -- the EPA issued a snotty attack on one of the three reporters who contributed to the piece, because of course that's what you do to prove that you're keeping the residents of Texas safe.

Here's what government press releases sound like in the Age of Trump: Defensive, bitchy, and misleading.

Yesterday, the Associated Press’ Michael Biesecker wrote an incredibly misleading story about toxic land sites that are under water.

Despite reporting from the comfort of Washington, Biesecker had the audacity to imply that agencies aren’t being responsive to the devastating effects of Hurricane Harvey. Not only is this inaccurate, but it creates panic and politicizes the hard work of first responders who are actually in the affected area.

Not mentioned in the EPA rant: The article's lead reporter, Jason Dearen, was in Texas, and drove, walked and boated to several flooded Superfund sites. He was there on the ground -- unlike the EPA, which, the press release proudly announced, didn't have to be, because it has satellite and aerial photos:

Here’s the truth: through aerial imaging, EPA has already conducted initial assessments at 41 Superfund sites – 28 of those sites show no damage, and 13 have experienced flooding. This was left out of the original story, along with the fact that EPA and state agencies worked with responsible parties to secure Superfund sites before the hurricane hit. Leaving out this critical information is misleading.

We looked at it! Stop lying and saying we weren't there! Also, we secured the sites. We won't tell you how, because we don'thave to, but we did. The press release also cited a Breitbart story to suggest that Biesecker is a Very Bad Reporter.

Administrator Pruitt already visited Southeast Texas and is in constant contact with local, state and county officials. And EPA, [sic] has a team of experts imbedded [sic] with other local, state and federal authorities, on the ground responding to Harvey - none of which Biesecker included in his story.

Did we get any information on what those EPA experts were doing, exactly, while imbedded? Obviously, they were keeping themselves safe -- the EPA issued a Press release Saturday saying 13 of the Superfund sites in the Houston areas were "no accessible," which will certainly be news to the AP reporters who drove, walked, and took a boat to some of them:

We're waiting on the EPA statement explaining that boats don't count, since that's cheating. The AP wasn't about to take the attack on Biesecker sitting down, especially because god knows what you might end up sitting in. In a statement, the AP said,

AP's exclusive story was the result of on the ground reporting as well as AP's strong knowledge of these sites and EPA practices. We object to the EPA's attempts to discredit that reporting by suggesting it was completed solely from "the comforts of Washington" and stand by the work of both journalists who jointly reported and wrote the story.

Elsewhere in the chemical soup this weekend, the Harris County Fire Marshal's office performed a "controlled burn" of the last six trailers full of volatile chemicals at the Arkema chemical plant in Crosby, about 25 miles northeast of Houston. Three trailers had already burned completely when their refrigeration failed, causing the organic peroxides to go boom when they got too warm. (The screenshot up top is of the third trailer going up on its own on Saturday, not the controlled burn on Sunday.) The public wasn't given any advance warning of the controlled burns, because they were supposed to have evacuated anyway. The fire marshal's office spokesperson Rachel Moreno offered no details on how the trailers were set alight, because "safety and security aspects," so we'll just guess 1) Drone B) Flaming arrows III) Radio controlled car rigged up with a flamethrower by Cousin Earl, who likes fire a lot. However they did it, Moreno said, "We did it in a very safe manner." That Earl, he says he knows what he's doing.

After the fires were out, residents were allowed to return to the evacuation area, and presumably told to ignore any funny smells, which were no doubt due to toxic waste in the floodwaters, not the air, so everything's fine. Just don't go badmouthing the EPA, you hear? They will come after you, tell you what.

Yr Wonkette is supported by reader donations! Please click the "Donate" linky and we won't issue a bitchy press release about you.