How Many Countries Helped Trump Steal 2016 Election? Sean Spicer Says ALL OF THEM KATIE 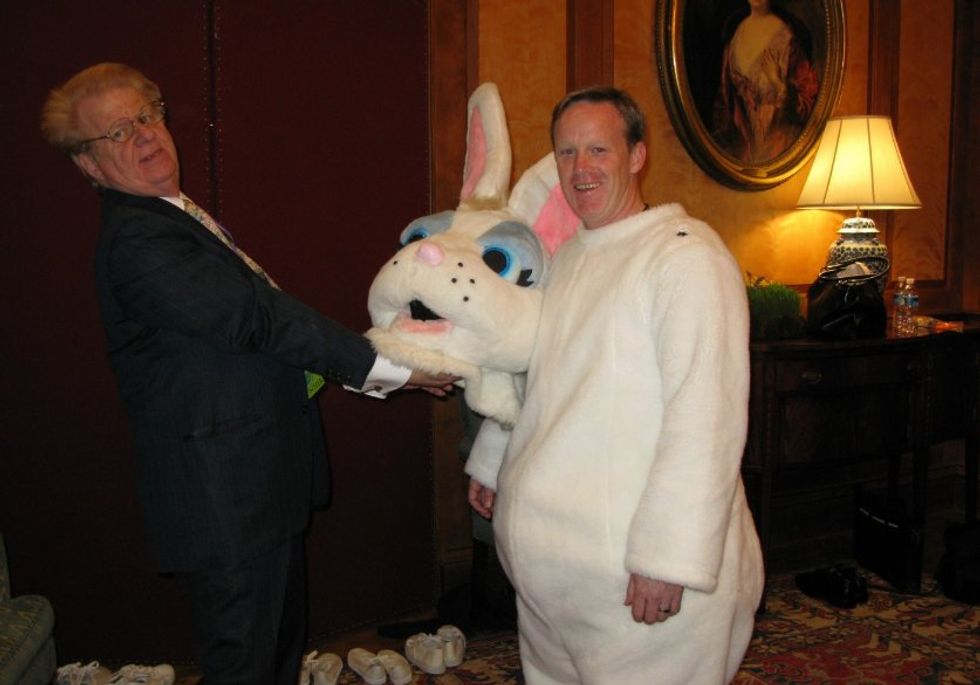 HAHAHA SILLY US, that is not a video! It is a tweet from New York Times reporter Glenn Thrush, because Spicer still isn't giving on-camera briefings. Is it because he's a morbidly obese pig man, like Steve Bannon said? Or is it just because the Trump White House is un-American and doesn't believe in a free press?

Anyway, two things. First of all, it's nice to see that Trump is finally admitting, even if he's saying "probably," that Russia did the meddling. He of course finally admitted this because Barack Obama tricked him -- it was a Jedi Mind Trick, according to Joe Scarborough! -- by being the main character in a major Washington Post investigation on the Obama administration's handling of the Russian election interference. The second Trump could blame Obama for the Russian hacking, he immediately and accidentally admitted on Twitter that yeah, Russia did it. Poor Trump's premature ejaculations are nothing if not predictable.

But what of the other part of Sean Spicer's statement, about the "other countries" that helped steal the election for Trump? It sounds like maybe he is echoing Trump's constant refrain of "Maybe it was Russia! Maybe it was Giiiiiina! Maybe it was a chunk-tastic New Jersey bed hacker! Nobody knows who it was!" Or maybe he's saying some kind of veiled racist thing about how Hillary Clinton's popular vote win only happened because of illegal Mexicans from Mexico.

Or maybe he's admitting something, just like his boss. Because off the top of our head, we can think of several other nations that could have been real helpful to Trump and Russia in pulling off one of the century's greatest crimes against America. Like these:

And there are probably others we don't feel like remembering right now. But it's mostly Russia's fault.

Anyway, it's really nice to see Sean Spicer and Donald Trump finally halfway admitting what 17 U.S. intelligence agencies knew approximately 6,000 years ago. We can't wait until next week, when they decide to claim they've admitted NOTHING.

Wonkette is fully funded by you, since we ain't got no ads. If you love us, click below to fund us!