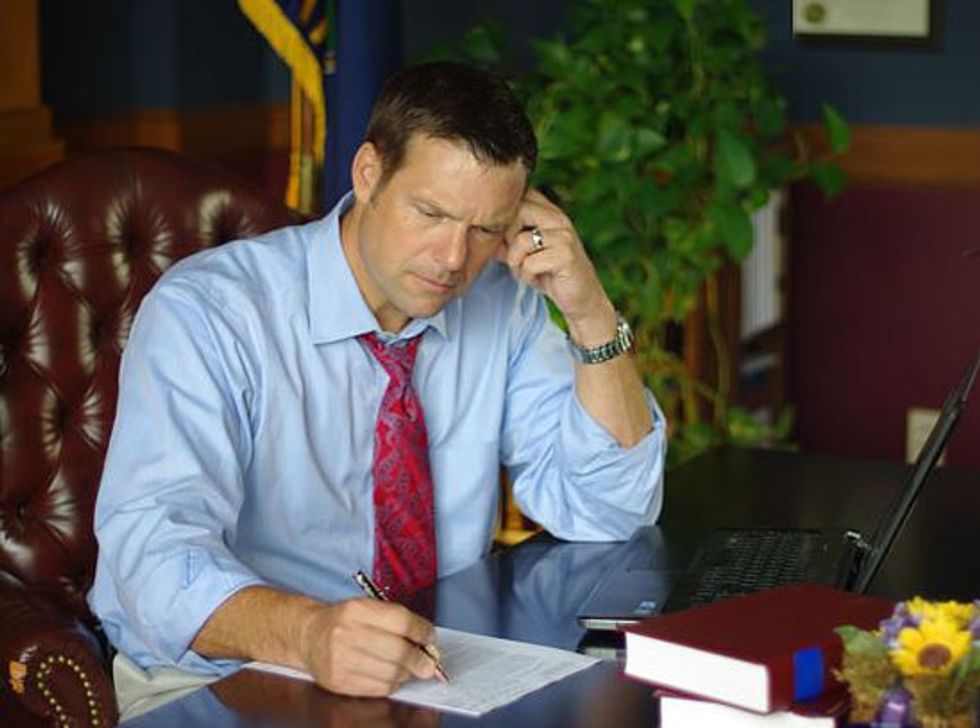 The federal trial in the ACLU's lawsuit against Kansas's voter-suppression law wrapped up Monday with testimony about dubious polling done by Secretary of State Kris Kobach's team. Tuesday, the court held a separate hearing into whether Kobach should be held in contempt for not following a 2016 order to help people suspended under the law to vote in that year's election while the case moved forward. US District Judge Julie Robinson won't rule on the larger case for about a month, but is expected to rule on the contempt motion as soon as today. Judging by Robinson's scolding of Kobach during yesterday's hearing, she seems unlikely to accept his arguments that virtually every election official in the state -- except for himself -- is responsible for the failure to notify suspended voters that they were allowed to vote in 2016.

What's All This, Then?

Federal Judge Thinks Kris Kobach Is An Asshole Too

He may be an idiot, but he's an idiot who helps maintain a Republican majority.

Oh lord this man is an incompetent schmuck.

The trial will determine whether Kansas's 2013 law requiring people to produce "documentary proof of citizenship" in order to vote is constitutional, or an unwarranted restriction on the right to vote. As we 'splainered a couple weeks back, a previous ruling set two hurdles Kobach needed to clear during this trial for Kansas's law to be constitutional. He had to show that Kansas has a significant problem with non-citizens registering to vote, and also that "nothing less burdensome" than the requirement for proof of citizenship can remedy that problem. Most of the testimony so far has been aimed at the first question, and Kobach's experts have been underwhelming, at best.

Monday: All White Republicans We Polled Love This Voting Law

On the final day of the trial, Republican pollster Pat McFerron -- a longtime political consultant for GOP candidates like former Gov. Sam Brownback -- testified about a poll Kobach commissioned to measure whether the Kansas law was burdensome. Wouldn't you know it, McFerron's poll of 500 Kansans found 80 percent of respondents think the law is perfectly fair, and more than 99 percent said documenting their own citizenship would be really easy: Just one person said they couldn't easily produce a proof-of citizenship document. No problem, and anyone claiming this law suppresses the vote is lying and probably too lazy to be allowed the franchise.

In cross examination, an attorney for the plaintiffs painted McFerron as a political hack whose polling was custom-tailored to get answers supporting Kobach's position. McFerron admitted that one of his central poll questions just might possibly have the tiniest bit of bias. See if you can spot it!

In 2011, because of evidence that aliens were registering and voting in Kansas elections, the Kansas legislature passed a law requiring that people who register to vote for the first time must prove that they are United States citizens before they can become registered. Do you support or oppose this?

That's the one that got 80 percent support, if you can imagine that.

An ACLU witness said McFerron's polling was dubious because it was rushed, didn't include any significant sample of people who weren't registered to vote, didn't provide data on the number of people who didn't respond at all to the poll, and used other questions worded to encourage respondents to say they had documents like passports, even if they didn't.

In closing arguments, ACLU lead attorney Dale Ho said Kobach's "stories about non-citizens stealing our elections are not real," and that where Kobach insisted that the few known incidents of non-citizens voting (11 votes by non-citizens since 2000) were the "tip of the iceberg," his attempts to prove that there were 18,000 non-citizens registered to vote in Kansas were completely unfounded -- one of the polls from which Kobach's experts derived that number sampled just 37 people, for instance. Ho said, "The iceberg, on close inspection, your honor, is more of an ice cube."

Kobach's closing argument insisted that obviously the Kansas legislature thought non-citizen voting was enough of a threat that it needed to be prevented, and that no one had actually been prevented from voting by the law -- they simply hadn't gone all the way through the process of proving their citizenship, you see. That's not voter suppression, that's just people who aren't willing to jump through some very necessary hoops. Kobach admirably refrained from using the word "shiftless." He also said that even if his crappy researchers' lowest estimate of 1,000 noncitizen voters were correct, that was still a large enough (completely unproven) number to justify the proof-of-citizenship law, and no less-stringent measure could hope to root out all that frauding.

With the actual trial over, Judge Robinson on Tuesday heard arguments in the ACLU's motion to hold Kobach in contempt of her 2016 ruling that Kansas had to register tens of thousands of people who applied, even though Kobach's office had blocked them for not providing citizenship documents. Robinson ruled in May 2016 that the applicants were eligible to vote in that year's elections under the federal "Motor Voter" law, but the ACLU accused Kobach of dragging his feet on actually registering them and notifying them they could vote. And here we are in ANOTHER election year.

In Tuesday's contempt hearing, Robinson gave Kobach and his team a good dressing-down, saying they had “participated in gamesmanship” and had "repeatedly" avoided following her orders. KCUR reports,

In the nearly two years since Robinson ordered him to register those voters, she said, he has forced her and the American Civil Liberties Union to monitor his actions down to the tiniest details in an effort to get him to comply.

The ACLU argues that Kobach's office had failed, repeatedly, to make sure the affected voters knew they were allowed to vote, and to advise county elections offices that these voters should be treated just like any other voters.

Kobach claimed it wasn't his fault, no no no, because as secretary of state, all he could do was tell county offices about the ruling. Actually sending the voters postcards informing them they could vote, and where their polling places were, was up to the counties, he said, and so that was totally out of his hands.

“These people are not second-class registered voters,” she told him. “You assured me that they had or they would get the postcards.”

She questioned why Kobach had had no problem getting Kansas’s 105 counties to require birth certificates and similar documents from voters in recent years, yet denied he could make them mail postcards or comply with other aspects of her orders.

Good question! In case you're wondering, Judge Robinson, to whom we have set up a small shrine in the Wonkette Pavilion of Heroes, was appointed to the federal bench by George W. Bush. You know, a flaming liberal.

When Kobach said he'd really really tried to follow Robinson's order, she continued to read him the riot act:

“You are under an ethical obligation to tell me the truth,” Robinson said. “If you tell me you’ve done something, I trust that. That’s why lawyers are licensed.”

Kobach also tried to argue that it was really difficult to keep up with all of Robinson's new orders, which really didn't win him any sympathy at all: She pointed out that she only issued an October 2016 order because Kobach had failed to comply with exactly the same order in May; during those five months, voters were still getting notices saying they couldn't vote.

The prevailing question, Robinson said, is why the secretary of state doesn’t comply with her directives unless he gets caught.

[It] was striking how many people other than himself Kobach sought to blame during this hearing for the post cards not being sent. He tried to throw Bryan Caskey under the bus then the county election officials who he said didn’t follow instructions. [At] one point he read to Caskey a list of all of the lawyers and a paralegal that worked in his office, saying they too could have told Caskey to tell election officials to send out the post cards.

Kobach didn’t apologize for a misunderstanding or admit wrongdoing and offer plans to correct. He blamed every single election official he could find and insisted he’d done nothing wrong.

Hey, Kansas, that schmuck wants to be governor. Judge Robinson is expected to rule soon -- possibly today -- on the contempt order, and we'll take a wild guess she's not likely to accept "I forgot I had to follow a federal judge's order" as an excuse.

This being Kansas, no telling whether being visibly, laughably incompetent and refusing to follow a federal judge's order will hurt Kobach's campaign at all. Especially if he can keep certain undesirable elements from voting.