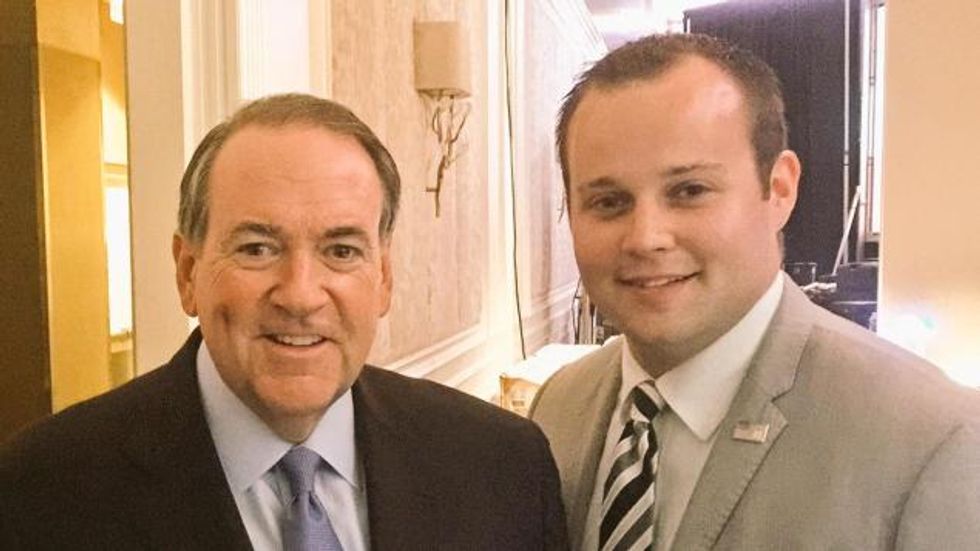 It's okay to feel sorry for Josh Duggar -- we as liberals know teenage boys' brains haven't finished developing yet, which is why we don't like sending them to the electric chair. Liberals also know we are molded by our circumstances: He was so young (assuming -- assuming -- his sexcrime spree has ended). Plus, he's got those parents, and all that sexual dysfunction, and the bizarre patriarchal bullshit, and the constant lessons that Eve (even in the form of his preteen sisters, apparently) is there to tempt him from righteousness, I mean my god. We also know that nobody is all good or all bad, except Dick Cheney.

But Josh Duggar's "mistake" (molesting five girls, including four of his sisters) went on for a year ... after his sisters told their father, Jim Bob Duggar, that Josh had been groping on their dirty pillows and their sin holes (THEIR VAGINAS) while they slept. A year. A year after they'd made it known that no, actually, they did not consent to any childish sexual experimenting, considering they went to their dad for help. So that seems less like "dumb fucked-up repressed kid" and more like "predator." I'd suggest he should have tried masturbating instead, but considering the values of his gross, terrible family, that's probably an equal "sin."

We aren't going to go into the Duggar family's vicious, fork-tongued hypocrisy regarding gay people or trans people -- we've covered that already. We're not going to go into Josh's disgusting work for the hate group Family Research Council. We're not going to go after Mike Huckabee for weeping his fat salty tears for Josh Duggar and the "good" Duggar family, while hissing that the Obamas are unfit because they let their daughters listen to Beyonce, the Nubian Whore -- we've already done that too. (We will take the time to link to @teachersabrina, though: "#Privilege is receiving the presumption of innocence, even after you’ve admitted you’re guilty.")

What we are going to talk about is what the Duggars' religion -- their freaky-deaky, Stepford-meets-Taliban, patriarchal, Quiverfull, homeschooled, isolated, culty, HARMFUL AND DAMAGING religion -- teaches them about their girl babies. Because what it teaches is Some Bullshit, and it is Not Okay.

What we have below are teachings on "moral failures in a family" as captured for posterity by RecoveringGrace, which tracks abuse in the homeschooling fundamentalist community. Today's lesson comes from Bill Gothard -- who coincidentally has been accused of sexual abuse and harassment by more than 30 teenage girls, but don't worry, the institute he founded cleared him of all charges. Gothard is the big sexy brain behind the "Advanced Training Institute," which just happens to be the moral authority on how to homeschool your children that the Duggars follow. Do note that despite the similarities, the young man molesting his sisters in this "moral" lesson is not Josh Duggar, whose admitted crimes against his sisters and one of their friends occurred throughout 2002, while this worksheet has been around since the '90s.

We already know (because Mama Duggar, Michelle, admitted it to the police) that in actuality Josh never had any counseling to help with his compulsions; instead he was sent away for a whole summer to live with some dude while doing home remodeling. What we don't know is whether the girls were given any counseling; statements from Josh, his wife, Anna, and his parents don't really focus on the girls, you know? In fact, the girls he molested aren't actually mentioned at all! (The real victim, of course, is Josh.) HOWEVER! If the girls did get any kind of therapy (facts not in evidence), it's a solid bet that the below was all the help they got on how to heal.

Let's skip one through three and zoom in on number four: "Why Did God Let It Happen?" We have some options: Immodest dress! Indecent exposure! Being out from protection of our parents! EVIL FRIENDS! Oh wait, sorry, that was a question mark: evil friends?

Yes. Your evil friends caused your brother to molest you. Now that we know that Josh Duggar's sisters were probably but not necessarily responsible for their own molestation, let's see if there could possibly be times when they weren't to blame:

"If abused was not at fault." HALLELUJAH it is possible you did not molest yourselves, Duggar girl babies! Praise the lord and pass the holy bathing suit!

RecoveringGrace has ever so much more, and all of it is terrible. A boy (who, again, was not Josh Duggar) molested his sisters, and Gothard's takeaway was that boys should not change their sisters' diapers and that his toddler sisters caused their own molestation by wearing towels out of the bath. The boy concurs: if the girls had been modest, and his parents hadn't made him babysit, he probably would not have abused his sisters sexually. Also to blame are porn and (atypically!) a lack of sex ed from his parents. Also ALSO to blame are laziness and back-talk and teenage sulks -- so, parents, your teen is doubtless sexually assaulting the whole neighborhood RIGHT NOW. Sorry :(

Do avail yourself of the opportunity to read the whole thing. These are the people being held up as moral exemplars by half our nation.

Women -- girls, toddlers, diapered babies, whatever -- have swept him from the path of righteousness. What could a boy do but avail himself of their lithe preteen bodies? And his sister didn't even cry out to God to save her? Whatever, slut.

Older lessons from Gothard and his Advanced Training Institute explain quite readily that a girl is almost always to blame for her own rape; in one Old Testament case, Dinah does not listen to her father, Jacob, and gets raped. In another, Tamar does listen to her father, King David, and gets raped. Fucked if you do and fucked if you don't, probably should have done whatever third thing is the opposite of both those other two things, and also, I think I might have seen your ankle, please come get your raping.

Oh, "there is no victim if we understand we are called to suffer for righteousness"?

In conclusion, I am sorry, Duggar girls, that you have been reared in a fundamentalist culture that considers you to blame for a man's actions; that he is the victim and you must affirm your love for him like so ...

Sufficient to such a man is this punishment, which was inflicted of many. 7 So that contrariwise ye ought rather to forgive him, and comfort him, lest perhaps such a one should be swallowed up with overmuch sorrow. 8 Wherefore I beseech you that ye would confirm your love toward him.

... and he is your brother, and maybe you DO love and forgive him (you're allowed!) but you also have been coerced into loving and forgiving him because your cult would have thrown you into the terrifying World where rapes are around every corner, but those are non-family rapes, so they are scary; and you are not allowed to go to college, or anywhere else, because you will become damaged goods (immodest and impure) and only your brother is allowed to do that to you; and everything is terrible. I am sorry, Duggar girls. Also, that your parents and brother are such pieces of shit.