How Pissed Putin Gonna Be About These Sanctions, On A Scale Of One To 'Guess I'll Poison Somebody'? 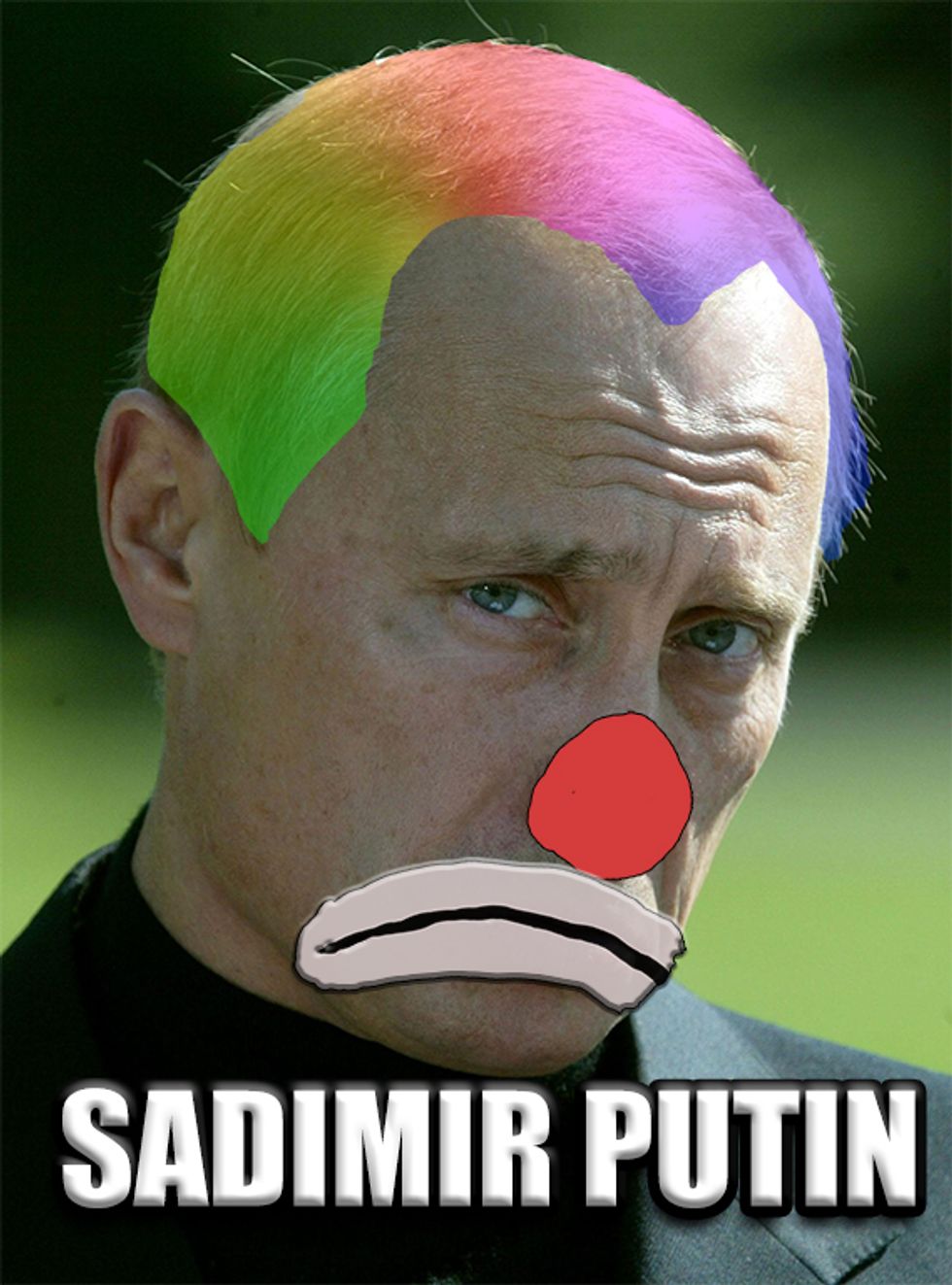 WHOA, the Trump administration actually sanctioned some damn Russians! Congress has been ordering them to do this for A WHILE NOW, but Donald Trump hasn't wanted to, because he is in romantic love with Vladimir Putin, and besides, he wouldn't be president if it hadn't been for Putin, right? We are guessing the Treasury Department hid these new sanctions in a bucket of Big Macs, or else told Trump all the Russians on the list were big stakeholders in Amazon. Or maybe they put the list of names in his briefing with a big all caps note written in Sharpie that said DO NOT SANCTION.

Here is what these folks are being sanctioned for, according to Treasury Secretary Steven Mnuchin:

The Russian government engages in a range of malign activity around the globe, including continuing to occupy Crimea and instigate violence in eastern Ukraine, supplying the Assad regime with material and weaponry as they bomb their own civilians, attempting to subvert Western democracies, and malicious cyber activities.

Goodness, Mnuchin actually said some stuff! Though, of course, he notably didn't call out Russia directly for stealing the election for Trump. But maybe that is implied in "attempting to subvert Western democracies" and "malicious cyber activities." SHHHH, DON'T TELL DONALD.

In all, according to Treasury, new sanctions are being smacked on "seven Russian oligarchs and 12 companies they own or control, 17 senior Russian government officials, and a state-owned Russian weapons trading company and its subsidiary, a Russian bank." Remember what we were saying recently about how the last sanctions were literally the least they could do? THESE ARE BETTER! They are not everything that's needed, but they are better.

Oleg Deripaska! That guy Paul Manafort stole/laundered all the money from!

Guess the Robert Mueller Trump-Russia investigation isn't TOTAL fake news, because oh boy, Deripaska's name comes up a hell of a lot in that! The Treasury Department notes:

Deripaska has been investigated for money laundering, and has been accused of threatening the lives of business rivals, illegally wiretapping a government official, and taking part in extortion and racketeering. There are also allegations that Deripaska bribed a government official, ordered the murder of a businessman, and had links to a Russian organized crime group.

Most recently seen in the pages of Wonkette in a piece about how he is MOMMYBLOGGING AT THE DAILY CALLER, Deripaska is known as Putin's FAVORITE oligarch. Paul Manafort worked for him for a very long time, for the "benefit" of Putin, and proceeded to either steal or launder a shitload of money from him. During the 2016 election season, Manafort offered Deripaska super secret sexxxxy briefings about the campaign, for OH WHO KNOWS WHY reason. Also, his former girlfriend is in a Thai prison right now saying she has mounds of evidence from Deripaska's yacht of a gigantic campaign to interfere with the election.

Buncha big companies Big Oleg owns/controls are on the list too.

Deripaska's favorite color is "murder" and his favorite thing to do on a first date is "murder," allegedly.

If Oleg Deripaska is Putin's favorite, then Torshin is the NRA's favorite. We've been getting to know him a lot recently, as Robert Mueller is VERY JUST WONDERING if Torshin might have laundered funds through the NRA and into the Trump campaign. Torshin is an NRA lifetime member, and has been instrumental in selling the Russian people on the wonders of the Second Amendment. (There are no plans to bring any of the other amendments to Russia. Sorry, Russians!) Torshin is also way up Trump's ass, and even ate dinner with fellow raging gun-humper Donald Trump Jr. at a 2016 NRA convention in Louisville.

Torshin, a former member of the Russian Duma and also a "former" FSB guy (Russian spy), is the Deputy Governor of the Central Bank of the Russian Federation, and he is a creepo mafia criminal guy currently under investigation by the Spaniards, for money laundering.

Torshin's favorite Disney cartoon character is Jafar and he is a five time champion at the Kremlin's annual "Mister Personality" pageant, which is a thing the Kremlin totally does.

Kirill Shamalov, Vladimir Putin is the dad-in-law of you!

We didn't know much about Shamalov, except how he is in the oil 'n' gas bidness and his wife is Putin's daughter. But ooh we bet Putin hates it when you fuck with his FAMBLY.

On top of those, there are also a good handful of other people, places and things on the list, including a buncha folks from Russian energy giant Gazprom. Read the whole report from Treasury here!

Of course, there are many other oligarchs that SHOULD have been on this list, but who haven't been touched yet. Like for instance German Khan, dad-in-law of Alexander van der Zwaan, who recently had to GO TO JAIL for lying to the FBI in Robert Mueller's probe. Khan, of course, is the co-owner of Alfa Bank in Moscow, which seems to be very strangely inter-connected with the Trump-Russia scandal. And also many others! Keep going, Treasury Department! You're not finished yet! Keep tricking Trump into doing sanctions!

Regardless, there are enough people and entities on this list that the Russians will be mighty pissed off. What are they going to do, sanction Bill Gates? HAHAHAHAHAHAHA LIKE BILL GATES CARES WHAT SOME FUCKING TWO-BIT RUSSIAN DICKWITS DO.

In summary and in conclusion, we are mildly impressed, and we hope Putin doesn't release the Trump pee tape in retaliation, just kidding he can release it, just kidding that would be bad, oh well, you do you, Vladimir Putin, you trash hole fuck pube.