How The Wingnut Freedom Caucus Took Congress Hostage: A Wonksplainer 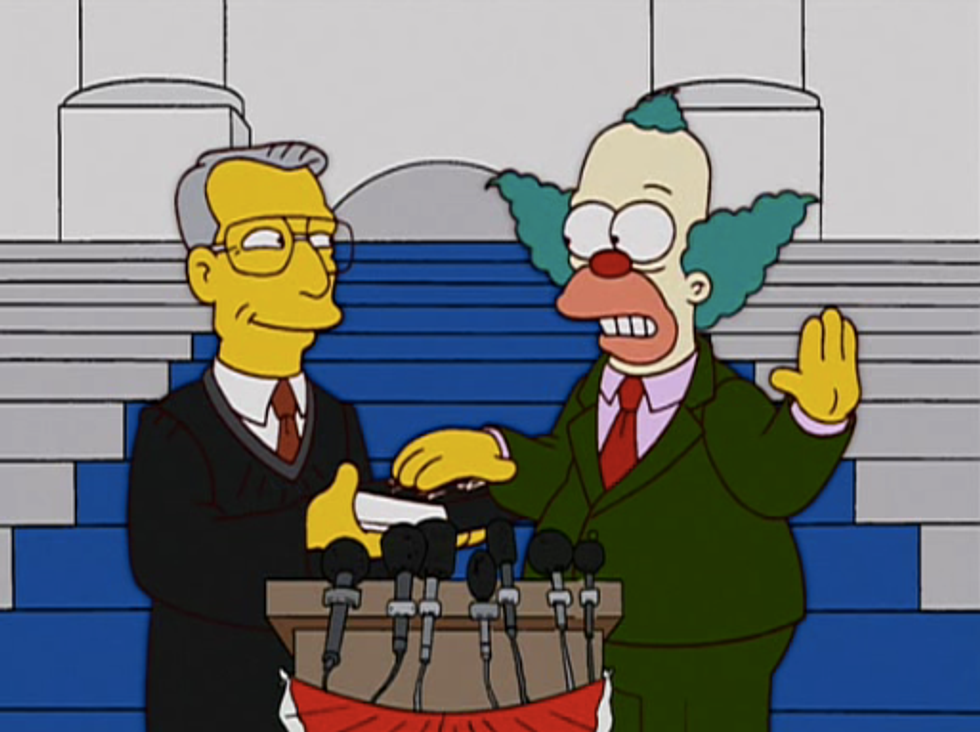 Cartoon clowns would be an improvement over the Freedom Caucus.

Colloquially speaking, the Freedom Caucus is the spoiled asshole millennial who can’t find his dick with Lindsey Graham’s hands but is demanding the corner office straight out of college.

Metaphorically speaking, it's the shit-stained pile of week-old garbage creating nothing but misery and a bad stench at Congress. To put it nicely, its far-right Republican members are the fuck-waddiest of fuckwads that Capitol Hill has to offer.

And they are in charge of the House of Representatives. As Larry David impersonating Bernie Sanders would say, “We’re DOOMED!”

You’ve probably read a lot about the Freedom Caucusers in recent days, because they are the ones claiming the scalp of John Boehner, Kevin McCarthy, and any other “moderate” “RINOs” they've scared away from the speakership. And they are the ones reluctant future speaker Paul Ryan had to grovel before on his knees, begging them to blast him with some hot, sticky endorsements (haha, now you have THAT mental image).

But who are these congresscritters? Why do 40 or so of the most regressive, anti-woman, anti-immigrant, homophobic, ignorant-ass motherfuckers in Congress have so much power?

Where the hell did they come from?

Before January of this year, conservatives who thought the Republican Party trainwreck was in bed with Chairman Mao would prove their tin foil hat bona fides by joining the Republican Study Committee. Darrell Issa? Paul Ryan? Trent Franks? All members of the Study Committee. For 10 years, this was the Cool Kids Club for reactionary xenophobes and Cro-Magnon cretins.

But for some, this group was not hate-mongering enough. There HAD to be a worse way. So they decided to lurch even further to the right, because far-right radicalism knows no bounds. Described by Roll Call at the time as a “splinter group,” they formed the Freedom Caucus. They claimed their agenda would focus on “limited, constitutional government in Congress.” What they have become is a radicalized extremist group of nihilists, hell-bent on holding their own party hostage to their demands, threatening any and all peace and stability in the congressional region. And America.

But what do we know about them? Turns out, not nearly enough.

Who the hell are they?

We know some of their members (Reps. Raúl Labrador, Jim Jordan, Daniel Webster), who are all A Idiots. But why don't we know them all? Why do we only know that there are 40-ish members? According to Vox:

I say "approximately" because the group treats its membership rolls as a closely guarded secret. We know approximately how many members the HFC has, and most of the group's members have acknowledged being part of it. But some suspected members of the group have been weirdly cagey about whether they're part of it. "It’s nobody’s business but our own," Rep. Scott Perry (R-PA) told a CQ Roll Call reporter about the group's membership list in July.

This is a major constitutional issue. In our checks-and-balances form of government, We The People are supposed to be the check on Congress (just as it is to be a check on the executive branch). If congresscritters are terrible, we get to vote them out every two years. But when the group actively trying to destroy the government from the inside won't even tell their names, how do we hold them accountable? How can we "throw da bums out" if we don't know who the bums are?

How the hell can a few dozen bums do so much damage?

If you are wondering how this secretive sect has so much power, we already explained that to you:

Unlike the Senate, the entire House of Representatives votes for the Speaker. So while Mitch McConnell needs just a majority of Republican senators, the Speaker needs a majority of all 435 House members, or 218 votes. Because Dems are not addle-brained fuckwits, almost all of them will vote for Nancy Pelosi. Republicans, on the other hand, are reaping the benefits of electing anti-government destructive tantrum-throwing asshats. The If-I-Can’t-Have-Everything-I-Will-Fucking-Break-All-The-Toys caucus is demanding that the new speaker basically piss in Obama’s eye all the time and NEVER compromise, because they don’t understand how “government” “works.”

The "If-I-Can’t-Have-Everything-I-Will-Fucking-Break-All-The-Toys caucus" is the Freedom Caucus. In addition to its ability to extract concessions from potential speakers, it also has the power to hold up legislation. Important legislation like raising the debt limit and funding the government to keep the lights on, so we do not cause a global economic collapse.

But the Freedom Caucus can demand an amendment to, say, defund Planned Parenthood, or they will vote no. Without their "approximately 40" votes, the GOP can't get to the 218 votes needed to pass a bill, unless leadership caves to the demands of a radicalized minority, or chooses an even worse option straight from the pits of hell: compromise with Demoncrats! SHUDDER!

What the hell do they want?

Their enlightened stances include opposing funding for women's healthcare, promoting anti-LGBT legislation, and meddling in local DC politics. Seriously, just think of the worst stances that "normal" GOP congresscritters have, throw in an ideological opposition to ever compromising on anything, sprinkle on some anti-government rhetoric, then go eight steps further right, and you have the Freedom Caucus.

This group is also demanding more power for "rank and file" members of the House. You know, the backbenchers who whine about how their six-figure salaries are too small. Or the newbies who got elected, like, yesterday and think they should have a seat at the Big Boys table immediately.

The Freedom Caucus is uninterested in the traditions of Congress, which, granted, haven't worked perfectly, but pretty damn well for most of our history. They are uninterested in learning the rules of the House, of working up from a junior member on a committee to a leadership position. They want ALL the goodies NOW, without earning them.

They promised they would change Washington. Sadly, they have. They made an acrimonious, toxic situation EVEN WORSE. They saw a gridlocked, partisan atmosphere and decided to squat and drop a deuce right in the middle of the floor.

And then they blame Obama for not cleaning up the mess.